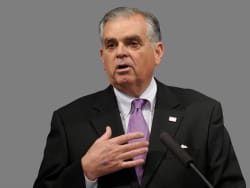 Ray LaHood had a lot on his plate when he was the US Secretary of Transportation. Whether it was distracted driving, cash for clunkers or troubles with Toyota, LaHood was at the helm of the DOT during a tumultuous time. Now that he's been away from the post for half a year, he's ready to get back into the swing of things by joining the board of directors at electric bus manufacturer Proterra. Proterra is the company behind the EcoRide fast-charging electric bus.

LaHood dealt with electric buses at the DOT through the Clean Fuels Program, which gave funds to cities to by the zero-emission people-haulers. In a statement announcing his new position (available below), LaHood said, " EV is the future of transit." This is not the first time he's had kind words to say about EVs. When Lehood visited Proterra in early 2011, he said the company was, "a model for the rest of the country."

LaHood announced he would leave the DOT last January and was replaced by Anthony Foxx in July.
Show full PR text
Former Secretary of Transportation Ray LaHood to Join Proterra Board of Directors

GREENVILLE, S.C., February 13, 2014 – Proterra Inc., the leading provider of the most cost effective zero emission battery electric bus, is pleased to announce that former Secretary of Transportation Ray LaHood will join the company's Board of Directors effective immediately.

LaHood's government experience and leadership in transportation policy innovation make him an excellent fit for Proterra. Prior to serving as Secretary of Transportation, he served on the House Transportation and Infrastructure Committee for six years and on the House Appropriations Committee for nearly eight years, giving him strong knowledge of the transportation sector and of the funding issues at play in the industry. During his time as Secretary, LaHood was an avid supporter of EV transit, leading the Federal Transit Administration's Clean Fuels Program, which was used to help fund the purchase of EV buses by several cities across the country. He also visited Proterra in early 2011, calling the bus company "a model for the rest of the country."

"I believe in the need for dependable, lower cost, more sustainable transit options," said LaHood. "EV is the future of transit, and I am pleased to lend my knowledge and support to building this future with Proterra – the clear industry leader and the only American EV bus manufacturer."

"We are incredibly fortunate to work with an expert like Secretary LaHood, who can offer insight into so many of the key issues facing our industry," said Garrett Mikita, president and chief executive officer, Proterra Inc. "He is a true and long-standing supporter of cost effective and sustainable transportation and an advocate of both transit agencies and manufacturers. We look forward to having the benefit of his wisdom and counsel as we work to advance the American transportation system and enable better solutions for taxpayers in transit."

Proterra is a leader in the design and manufacture of clean technology and clean energy, providing zero emission vehicles that enable bus fleet operators to significantly reduce operating cost while delivering clean, quiet power to the community. The EcoRide™ is the world's first battery electric bus with fast charge enabled infinite range. With unmatched durability and energy efficiency based on rigorous industry testing at Altoona, the Proterra product is proudly made in America and based in Greenville, SC. For more information about Proterra, please visit www.proterra.com.