Brandon Turkus
Chevrolet has made a big push with its latest batch of Silverado trucks to emphasize its link to the country. It did it this past summer when it launched the Silverado ad, Her Horse. So you'd be forgiven for thinking that this latest spot, featuring the new heavy-duty variant of Chevy's pickup, was more of the same.

It's stars a man, a large farm animal and a Silverado. So it's quite like Her Horse, but the entire premise has switched. Rather than Will Hoge's "Strong" playing throughout, there's something just a bit... funkier. It's a bit early to tell, but we're thinking this Chevy spot has just the right blend of subtle humor to be a surprise hit when it airs this Sunday during the Super Bowl.

We've embedded the entire 60-second spot below. Let us know how you think Chevy's latest volley, which marks the brand's return to high-dollar world of Super Bowl advertising after a one-year absence, will fare against the other automotive-themed Super Bowl commercials by posting in Comments.

DETROIT – The new 2015 Chevrolet Silverado HD makes a bullish first impression in its new commercial that will air during the Super Bowl XLVIII broadcast on FOX on Sunday, Feb. 2.

The 2015 Silverado HD's first TV ad, "Romance," is a charming story about a man, his truck and a new bachelor in town. It follows a handsome cattle rancher as he transports his stud-bull to an exciting, romantic rendezvous across town in the new Silverado HD – Chevrolet's strongest and most advanced heavy-duty pickup ever.

"We like how 'Romance' uses humor to show the power and capability of the truck and the interesting demands our customers place on their heavy-duty trucks," said Tim Mahoney, Chevrolet's global chief marketing officer.

The commercial was filmed in Austin, Texas, and is set to the 1975 hit, "You Sexy Thing," by the British group Hot Chocolate. It was developed by the Silverado's agency of record, Leo Burnett Detroit. The spot shows off the truck's exterior design and towing capabilities, as well as the available Duramax diesel engine and Allison® transmission. 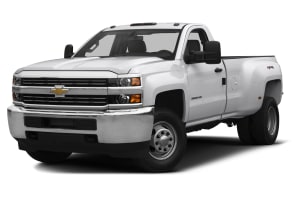