How the Koreans are cracking the luxury market

Hyundai And Kia Take Aim At The Germans

South Korea's two largest automotive brands are no longer the same companies they were when they first entered the world stage.

Anyone who visits Seoul after a few years absence is likely going to be in for a shock. What was, not that long ago, a decidedly third-world city is today a thriving, sprawling metropolis increasingly on a par with the world's most modern cities.

So it should come as no surprise, perhaps, that South Korea's two largest automotive brands are no longer the same companies they were when they first entered the world stage more than two decades ago. Gone are the "cheap and cheerful" products – a polite euphemism for entry-level junk – like the original Excel from Hyundai or the Aspire, the subcompact Kia built for former partner Ford, and which critics often derided as the "Perspire" due to its lack of power and amenities.

Kia, the smaller of the two sibling makers, recently confirmed what has long been rumored, revealing plans to introduce its first true luxury sedan. And Kia's ambitions are far from modest, its new K900 takes direct aim at the top of the premium luxury segment, where models like the Mercedes-Benz S-Class and BMW 7 Series live.

Paul A. Eisenstein is Publisher of TheDetroitBureau.com and a 30-year veteran of the automotive beat. His editorials bring his unique perspective and deep understanding of the auto world to Autoblog readers on a regular basis.


Hyundai, meanwhile, already has a car in that class, the full-size Equus. But its big news for the year ahead will be the debut of an all-new version of its own first rear-drive luxury car, the Genesis. You can be sure folks will be taking a close look at what Hyundai has in store considering the unexpected hit it delivered with the original Genesis sedan, named North American Car of the Year shortly after its debut. 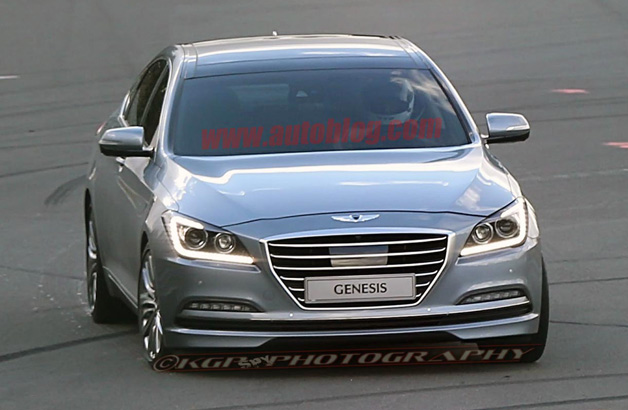 For the 2015 model, as seen in the spy photo above, Hyundai is no longer content to go with derivative styling. The "me-too" look of the original Genesis sedan has been replaced with a more distinctive, coupe-like shape – as well as a number of intriguing technologies – that seems determined to tell the world the Korean auto industry is no longer taking a back seat to any of its competitors.

The new model will be a "game-changer," contended Moon Sik Kwon, head of Hyundai Motor Group's R&D Center, located just outside the Korean capital of Seoul, as he pulls the covers off the 2015 model for the first showing to a group of US automotive journalists.


Korean cars "used to be one step above a Yugo," agreed Joe Phillippi.

Korean cars "used to be one step above a Yugo," agreed Joe Phillippi, a long-time automotive analyst and head of AutoTrends Consulting. "They've totally turned the company on its head," he said, referring to the giant conglomerate that now controls both Hyundai and Kia.

That's not to say either of the two marques have walked away from their traditional audiences. But even their most basic models, such as the $15,340 Hyundai Accent and the $14,400 Kia Rio, have recently gone through stylish remakes and offer the sort of performance and features one traditionally wouldn't expect of the econoboxes that once dominated the Korean line-up.

Will models like Accent and Rio remain in the model mix? That's a matter of debate. "Clearly," Phillippi says, "the Koreans have recognized that the Chinese will eventually come in after them – and under them. " So, he says he wouldn't be surprised to eventually see such low-end base models go away – or continue to move more upmarket, along with the rest of the Hyundai and Kia lineups.


Hyundai R&D Chief Kwon confided to me that there is clearly more in the works.

While Korean officials aren't ready to confirm that strategy, they do acknowledge their interest in expanding their premium offerings. Hyundai R&D Chief Kwon confided to me that there is clearly more in the works.

Specifics? Not ready to discuss, though it would appear that there are a number of models covering a wide range of potential luxury segments, including those between the latest Genesis and the big Equus models. How soon, "Not right away," he cautioned, the implication being it would be at least sometime into the second half of the decade before you see that potential flood of high-line products. Clearly, Hyundai wants to be sure the Gen-1 Genesis wasn't a fluke before going all-in.

As for Kia, the maker isn't entirely walking away from its traditional approach, even as it moves upmarket. The K900 may not be an econobox but, Kia officials recently suggested, the strategy is to offer "a ( BMW) 7 Series value for a 5 Series price" – language similar to what Hyundai officials expressed when they launched the Genesis and Equus.


One hint of the maker's intent was hiring Peter Schreyer, long associated with highline European marques such as Audi, as its chief designer.

One hint of the maker's intent was hiring Peter Schreyer, long associated with highline European marque Audi, where he was its chief designer. The well-regarded Schreyer has since been promoted into one of the top overall management positions at Kia and, you can bet, he's looking for ways to take on his former employers back in Germany.

Notably, Kia has indicated it has even more ambitious goals for the K900, planning to sell perhaps 5,000 a year, double what was considered successful demand for the Hyundai Equus.

It wasn't all that long ago that Korean cars were the butt of jokes – and the option of choice for only the most credit-challenged and parsimonious motorists. No longer. The reputation of both Hyundai and Kia are still in flux, but they clearly have improved their collective image and are now drawing far more affluent and discriminating buyers. While sales of Korean luxury cars still lag far behind key European, Asian and American brands, few of those competitors are ready to write Hyundai and Kia off anymore – doing so only at their own peril.
X