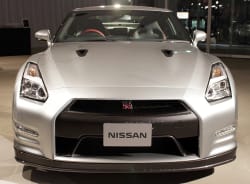 It was only a little more than a year ago that we were wondering if there would be a new Nissan GT-R, now here we are writing about the introduction of two of them. Carlos Ghosn himself unveiled the new 2015 Nissan GT-R Nismo and the standard-in-name-only 2015 GT-R on which it is based. The Nismo is all about ape-chested mojo, coming with the tagline "Zero Competition," GT3-derived tweaks without and within and a 'Ring time of 7:08.679.

Nissan also brought the actual 'Ring-running car to the event and you'll notice that it has a different rear wing than the two show cars. We were told that the wing on the time-setting car would be available on the car that goes on sale, Nissan intending to keep its "production car" promise.

You can check out the Nismo above in the new Dark Matte Grey exterior hue and in Brilliant White Pearl, as well as the new GT-R, its new Ivory interior and LED light signature below. We haven't written this in a while, so allow us to bring the challenge back: Porsche - your move...