An experienced cyclist's first encounter with an electrified bicycle

An experienced cyclist's first encounter with an electrified bicycle

Follow @cmcgrawaol
Electric vehicles are all the rage these days. Hardly a week goes by without some piece of exciting or controversial news from burgeoning electric carmakers like Tesla Motors. Long-established automotive companies are releasing more electric vehicles as well, like the Chevy Spark EV and BMW i3.

But what about electric bikes?

Electric bicycles have been around for over one hundred years in one form or another, but recently the popularity of these bikes--like their automotive counterparts--has skyrocketed.

Electric bike manufacturer A2B got into the e-bike game in 2008. They offered to provide us with their newest model, the A2B Alva Plus (or Alva+), for a few weeks of testing on the streets of metro-Detroit. With a range of twenty miles and a top speed of 20 miles per hour, the Alva Plus provides about an hour of electric riding, before requiring a recharge.

We picked up the A2B Alva Plus from Amp Bros Electric Bike Shop in Hazel Park, Mich., where co-owners Tony and John provided us with a friendly walk-around of the bike. According to John, the most common consumer to purchase these bikes from them may surprise you. People who have recently lost their driver's license due to legal issues (read: drunk driving) make up about 60% of their e-bike business, he estimated. 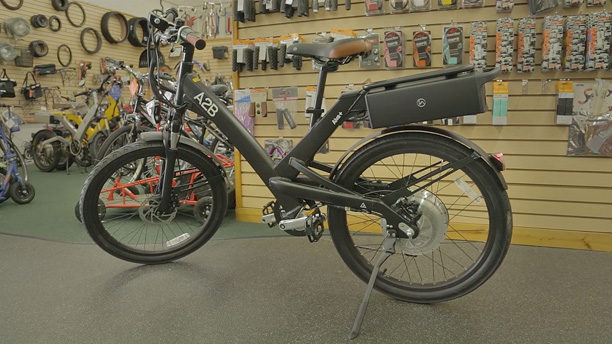 The robust-looking Alva Plus makes a strong first impression. Its matte black aluminum frame pairs well with the black and brown leather seat and brown rubber handlebar grips. The rechargeable lithium ion battery is the size of shoebox and hangs from the frame over the rear wheel. A shifter on the left handlebar lets you switch between the bike's 7 gears. The display, which turns on by holding a magnetic key fob in front of the screen, sits right in the middle of the handlebars and allows you to control your speed by switching through the bike's modes.


The robust-looking Alva Plus makes a strong first impression.

When we first got on the bike, we didn't really know what to expect. Even for someone who regularly puts in over 100 miles a week on his Trek 1000 road bike, our first ride on an electric was bound to be an entirely new experience.

The Alva Plus has four pedal assist modes, numbered zero through three. The higher the number, the more assistance the bike's rear hub motor will provide. Depending on your weight and the road conditions, the Alva Plus can assist the rider up to 24 miles per hour according to A2B, though the fastest we got the bike was around 30 miles per hour on a level road.

When set to mode zero, the bike provides no pedal assist, rendering the Alva Plus a regular bike carrying a hefty battery. Even in this mode, however, the bike travels quite nicely for its substantial weight of 66 pounds.

There was little not to love with the Alva Plus from the get go. The pedal assist feels clean and will get you to speeds in excess of 20 miles per hour in no time.

We rode this bike for an entire weekend, putting quite a few miles on it before unforeseen problems put an end to our testing (see below), but each time we went cruising, we couldn't help but sport a toothy grin. The Alva Plus is fun. Period.

We know what some of you are thinking, because we've been badgered with these questions before: Why would you need an electric bike? Why not just pedal?

For these questions we have a plethora of answers.

First of all, it is important to remember that not everyone is able to pedal their bike for long distances, due to health problems or other reasons. Just because these riders have trouble pedaling doesn't mean they should lose out on the freedom a bike provides. Bikes like the Alva Plus can provide the experience of the sun on your face, wind in your helmet-matted hair, while pedaling is entirely optional.

With gas prices reaching as high as four dollars per gallon over the past few years, another reason to consider an e-bike is commuting. The problem with using a standard bike is that, by the time some of us make our journey to work, we show up sweaty and exhausted, much to the dismay of our coworkers. With an electric bike like the Alva Plus, we can enjoy a less strenuous ride to work in the morning and recharge at the office for the trek home. The Alva Plus battery only takes about three to four hours to fill up using a standard 3-pronged outlet.

Reason number three: sometimes we just don't feel like exerting the energy it takes to pedal a bike to the store, even if it is only a few miles away. So instead, we hop in the car and waste a few dollars worth of gas to get us there. With the Alva Plus, you get the equivalent to 1000 miles per gallon, so that trip to the store will cost you next to nothing in energy. It might not sound like a lot of savings, but added up over time, trip after trip, the bike will eventually pay for itself--not to mention the health and environmental benefits.

In our experience, the Alva Plus was a great bike. But not a bike without its faults.


In our experience, the Alva Plus was a great bike. But not a bike without its faults.

At 66 pounds, the bike is very heavy. While this wasn't as much of a problem as we expected while riding, transporting the bike is another story. It took two people to maneuver the bike to and from the trunk of an SUV and we imagine the Alva Plus would challenge the sturdiness of a light-duty car rack. If you have a garage, count yourself lucky, because hauling the bike up and down apartment stairs got old really fast.

The battery was also difficult to slide off, though if you take off riding and forget to lock the battery, this may be a pro, not a con. Perhaps the track on the battery mount just takes some breaking in, as we only removed it a handful of times.

Another tricky feature of the Alva Plus is that it is completely silent while not in motion, even when turned on. Depressing the brake shuts off the motor, but we would prefer an additional fail-safe, like a seat sensor. Otherwise, an unsuspecting person might tweak the throttle, assuming the bike is turned off, sending it flying forward from a standing start.

We regrettably experienced this firsthand.

As any avid cyclist knows, accidents happen. Unfortunately, crashes are not where Alva Plus shines.

If you don't mind a few scratches and dings on your bike, the A2B Alva Plus can certainly handle being put down. There is just one glaring exception: A2B did not include a mechanism on the Alva Plus to keep the handlebars from spinning 360˚. For most bikes this wouldn't cause too much of a problem, other than tangled brake and gear cables. On the Alva Plus, however, the tension created by the spinning handlebars was enough to pull the wires right out of the display, rendering the controller useless (although, repairable).

Do I Know Why I Pulled You Over?

Another issue affecting electric bikes recently is the law. Because e-bike popularity is relatively new, there aren't consistent laws that deal with who can ride them and where. Some worry that the higher speeds and increased weight of e-bikes make them more dangerous to pedestrians in the event of a collision. Earlier this year, for instance, New York City banned electric bikes with a throttle, like the Alva Plus.

In other areas, like where we tested the bike, the law is much less clear. According to the state of Michigan, in order to be able to ride a Low Speed Electric Bike (LSEB) like the Alva Plus, you need a valid driver's license or moped license and a Department of Transportation approved helmet. Though we were told that when some riders went to the Secretary of State to obtain their moped license, they were told it wasn't necessary.

With all the issues currently facing electric bikes, even in a climate like Michigan where a third of the year it is too cold to ride to work, the Alva Plus is a no-brainer for those who are looking for an environmentally friendly, two-wheeled transportation option.

It was a blast to ride, and at an MSRP of $3,400, the Alva Plus is an affordable alternative to a gas-powered commute.
X