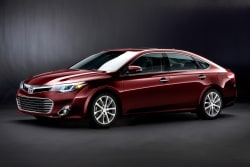 Toyota has announced plans to voluntarily recall 803,000 vehicles from model years 2012 and 2013, over concerns with the air conditioning condenser housing. The recall covers the Camry, Camry Hybrid, Avalon, Avalon Hybrid and Venza, although the exact split between affected models wasn't available.

According to Toyota, the condenser can leak onto an airbag control module, which in turn could cause a short circuit. In most cases, this will just lead to an airbag warning light, but in rarer instances, the airbags could fail to deploy or pop out of their own accord. There's also a concern over a loss of power steering if the airbag control module develops a short.

It's unclear if there have been any injuries or crashes relating to the defects. Toyota will begin informing owners of affected vehicles via first class mail, and will ask them to report to dealerships for recall work, involving the installation of a cover on the condenser housing.

In the involved vehicles, water from the air conditioning condenser unit housing could leak onto the airbag control module and cause a short circuit, resulting in illumination of the airbag warning light. In some instances, the air bag(s) could become disabled or could inadvertently deploy.

To remedy this issue, Toyota dealers will apply sealant and install a cover to the air conditioning condenser unit housing seam located above the airbag control module.

Owners of the involved vehicles will be notified by first class mail to return their vehicles to a Toyota dealer for the repair.

Detailed information is available to customers at www.toyota.com/recall and by calling the Toyota Customer Experience Center at 1-800-331-4331.