"Vanilla." Taken in modern context, that's not a compliment, but it should be. Vanilla actually has exotic origins, and as spices go, only saffron is more costly. Despite the realities, calling something "vanilla" is not whistling in admiration. The Toyota Camry has been called "vanilla" countless times since its debut, but both the car and the bean have something up their sleeves.

Scoff all you want, but vanilla is the most popular ice cream flavor, and there is no mainstream sedan that outsells the Camry. Apparently, vanilla has an underlying tinge of filthy lucre. We didn't feel rich, exactly, wheeling around in the Camry Hybrid, but we came away impressed, nonetheless.

"When I go to an ice cream parlor for the first time, I always order their vanilla," says Ralph Hannabury. Why vanilla? "When you're making ice cream, everything builds off vanilla. If they have that right, you know they know what they're doing," Ralph explained. Who is Ralph Hannabury? For more than two decades, he made ice cream for Russo's Candy House in Saugus, Massachusetts. Ralph knows vanilla, and good vanilla is hard.

It's the same thing with cars. Supercars are easy compared to a good, bland sedan that starts faithfully every day for hundreds of thousands of miles and exhibits none of the bad habits that are "features" when you're talking exclusive machinery. The Camry is a riot of dispassion to car people, and the Hybrid only moreso with its Hybrid Synergy Drive sopping up whatever visceral treats you can find in the standard Camry.

The Camry Hybrid is understated about its fuel efficiency.

Keeping the recipe metaphor going, even the best ingredients can't stand up to a poor chef. If the seasoning is overbearing or cooking technique flawed, you'll ruin expensive raw materials. With the Camry Hybrid, Toyota proves its skill at making the tricky Hybrid Midsize Sedan Souflee.

The Camry Hybrid is understated about its fuel efficiency. Look once, it's a Camry, just like the thousands of other Camrys that Toyota sells every couple of days. Look twice, it's still just like every other Camry and it's got extra little badges on its front quarter panels. Look a third time and you might notice the Hybrid-specific 17-inch tire and wheel package, but probably not.

Just like every Camry audio system, this one had an unpleasant trebly edge.

The Camry Hybrid interior is more distinctive, with its own gauge cluster, different plastic trim replacing the fake-wood-patterned standard trim, and Hybrid-specific seat fabric in quick-to-dinge ivory or light gray. The Camry Hybrid shares its acoustic glass windshield with the V6 model to keep noise out, and our car had the JBL GreenEdge audio system for making it. Just like every Camry audio system, this one had an unpleasant trebly edge that was only somewhat mitigated by selecting analog-only radio reception instead of the HD Radio default.

Our test car was also equipped with navigation and the Entune multimedia system. Entune is Toyota's answer to SYNC and MyFord Touch from Ford, with app support (apparently using Bing, making restaurant reservations with OpenTable and using movietickets.com to secure access to a matinee) plus weather, traffic, stocks and sports. With all those distractions pumping at you from the 6.1 inch LCD, it's a good thing the Camry Hybrid also has 10 airbags, high strength steel in the B-pillar and rocker panels, electronic nannies like stability control, radar-based Blind Spot Monitor and Safety Connect to call for help when you do wreck.

The dynamic compromises Toyota made for the Camry Hybrid were the right ones.

The tech isn't quite as easy to use as systems like Chrysler UConnect or even the half-reviled MyFord Touch, but it becomes an innocuous part of the experience quickly. Except for that horrible-sounding audio system. It's like they designed in tinnitus from the start. The rest of the interior impressions are the same as other Camrys. The seats are comfortable and decently supportive, the dashboard is topped with stitching in an attempt to class up the joint, though the panel doesn't blend into the doors gracefully and there are a lot of hard plastics around. It's roomy, comfortable, and the trunk doesn't even take much of a hit with the addition of the 244-volt hybrid battery pack, and it's in fact up 2.1 cubic feet over the last-gen Camry Hybrid.

Driving the Camry Hybrid is not going to light any enthusiasts' hair on fire, though it'll put electrons and molecules to work when you mash the throttle all the way to the carpet for a 7.6-second run to 60 miles per hour, slotting neatly between the more-than-fine four-cylinder model and bonkers-rocketship V6. Low-rolling-resistance tires are also low capability tires, so there's little point in trying to achieve thrilling cornering speeds. Driven like a normal person, of course, the dynamic compromises Toyota made for the Camry Hybrid were the right ones.

Toyota's Hybrid Synergy Drive system is flat-out the best implementation of such a setup we've yet to sample.

While it's not a high performance car in the hot rod sense, the Camry Hybrid is a high performer in its own right. Toyota's continued development of its Hybrid Synergy Drive system is flat-out the best implementation of such a setup we've yet to sample in a midsize sedan. The new Ford Fusion is looking to challenge that, but other comers like the Hyundai and Kia twins can't touch the Camry Hybrid's level of refinement, seamless handoff between electric propulsion and gas engine, and isolation from the judders of engine stops and starts.

The gas engine is a larger 2.5-liter Atkinson-cycle four-cylinder with more torque than before. It's been tweaked with a water-cooled EGR system that reduces the temperature of exhaust gas that gets re-routed to the intake to control emissions, a move that was previously accomplished by enriching the mixture. The new way saves more fuel, and the Hybrid Synergy drive system has been tweaked to increase efficiency by reducing transaxle losses, improving motor control, and an EV Drive mode has been added this time around, too. Toyota rates the net power from the electric and internal-combustion sources at 200 horsepower, which is more than plenty when you consider the surprisingly svelte 3,190 sub-3,500 pound curb weight and slick 0.27 drag coefficient.

The Camry Hybrid is exceptional for its normality.

That EV Drive mode only lasts for 1.6 miles, and if there's a hill in the way, forget it, you're not getting far without firing the motor. There's still the ECO mode you can select if you want to really be infuriated by unresponsive controls, too. When you just treat the Camry Hybrid like a normal car, i.e. stick it in Drive and go, only the brakes give away the hybrid-ness. Even at that, Toyota's got the regen-to-friction braking switchover very well managed.

The regular Camry isn't a standout in any category, while the Camry Hybrid is exceptional for its normality while returning EPA fuel economy estimates of 43 miles per gallon city, 39 mpg highway in LE trim, which drops to 40/38 in XLE guise. Our highway-heavy drive cycle returned us 38 mpg, bang on the estimates. Or, you could get a diesel Passat. There is only one car that offers the Camry nameplate and this kind of fuel economy, and that's the Camry Hybrid, and it's perhaps the most outstanding Camry of all. 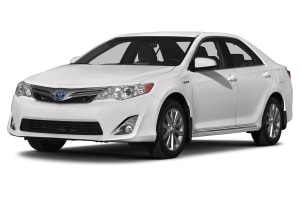