View All Specs
We're big fans of the Ford F-150 SVT Raptor, a full-size pickup impressively configured from the factory for serious desert running. While its stock, naturally aspirated 6.2-liter V8 provides 411 horsepower, some consider it lacking. Others still want more aggressive underpinnings for even more serious duty. Stop worrying, as Shelby American appears to have the answer with its new Shelby Raptor.

While the Las Vegas-based company offers nearly all of its upgrades on its à la carte menu (good for those on a budget), the test truck seen here arrived loaded with just about everything.

To begin the transformation, a 2.9-liter Whipple supercharger and intercooler are bolted to the V8, followed by a Shelby Stinger exhaust system to improve the engine's breathing. The upgrades bump output by 164 horsepower, meaning the truck goes from 'impressive' to 'seriously quick' on the acceleration scale. But the company doesn't stop there, as the suspension has been upgraded with Shelby 3-inch shocks, new upper and lower control arms and a new frame kit with bump stops. In addition to a new skid plate package for protection, the stock wheels have been replaced with 18x9 Shelby Method alloys wearing aggressive 35-inch BFG Mud-Terrain T/A tires (35x12.50R18LT) for go-anywhere capabilities.

Cosmetically speaking, the interior is upgraded with a custom Shelby leather package and additional gauges have been added to allow the driver to keep a closer eye on things. The exterior doesn't escape the treatment, either, as it receives new bumpers, a full chase rack and plenty of graphics. And, of course, there is the obligatory unique Shelby serial number plate on the blown engine and one for everyone to see prominently on the dashboard.

We recently spent an afternoon criss-crossing the LA Basin with this massive truck, putting in a few soft-roading miles for our photoshoot. To really do the Shelby justice and properly explore its capabilities, however, we really need to spend more time doing what it genuinely wants to do. That is, launching it off tall berms, crossing deep streams and bashing over rocks. Unfortunately, the opportunity didn't present itself. Next time. 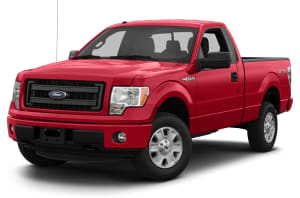