For a car that Fiat- Chrysler CEO Sergio Marchionne still doesn't sound enthusiastic to sell, the 500e sure is getting a lot of official company support. Despite this year's admittedly-limited production run already being sold out, the company continues to promote the values of the improved (in my eyes) battery-powered version over its gasoline-burning sibling.

Case in point, at the (totally amazing) running of the 2013 Refuel event at Mazda Raceway Laguna Seca, the Fiat flag flew proud over a substantial piece of parking-lot real estate, wherein a small fleet of 500e coupes sat ready to impress all driver license-holding comers willing to wheel the Italian sub-compact around an orange-coned autocross course. We decided it would be foolish to not take Fiat up on its kind offer.

Sure, we've already enjoyed some canyon-carving seat time in the 500e, but this was an opportunity for total hoonage.

How could we not? Yeah, we've already enjoyed some Califorinia canyon-carving seat time in the 500e, but this was an opportunity for total hoonage. The kind of extra-legal activity we are (mostly) loathe to participate in on public roads. And we weren't alone. There was a steady stream of both wanna-be Mario Andretti's, and serious track rats signing up to fling the little electric about the improvised circuit. Most, we believe it's fair to say, came away impressed. We certainly were.

The Fiat reps on hand were friendly, informed and enthusiastic and, after getting us situated in the leather driver's seat of a nice black example, encouraged us not to hold back. We obilged. Tires grabbed at the pavement searching for grip as we acquainted the accelerator with a leaden loafer and the car shot forward, reaching turn one – a hairpin – far faster than we had expected.


The car shot forward, reaching turn one far faster than we had expected.

No problem, though. The regen-aided brakes reeled us in well enough to allow our foot to ask for more amps as we squealed around the turn, briefly meeting the carpet as we contributed to the black rubber mosaic that decorated the pavement at the turn exit.

The rest of the course offered more squealing corners than rocket-ship straights, so when the end came too soon, we were pleased at the invitation to try another lap. Two more roundabouts and we were reluctantly ready to let the next person have a go. But, instead of a "pull up behind that car on the left," we heard "would you like to go around again?" "Don't mind if we do," our grin and right foot communicated.

We came away from Fiat's " environmentally sexy" autocross installation both pleased and puzzled. The 500e has to be the best electric car its maker doesn't want to sell. So, could this little drive event just be an exercise in improving the image of the company? (Hey, it seems to be working for Nissan.) We certainly noticed that the short survey we were asked to complete before and after the drive had everything to do with the brand and nothing to do with this particular electric model.

We wish Fiat would consider burnishing the EV member of its brand in more parts of the country – right now, it's only available in California – so that others might have a chance at a positive electric experience. And for just $199 a month, too. Nothing, they say, sells electron-eating cars like bums in seats. We're certainly sold. 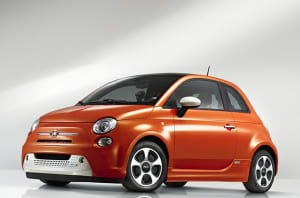