Subcompact car sales in a funk despite high gas prices When gas prices rise, knee-jerk consumerism means that sales of small cars increase in lockstep, right? Well, sometimes – but that's not always the case. Ward's Auto reports that sales of subcompact car sales in America are off despite fuel prices pushing and holding at $3.50 to $4.00 a gallon across the country. According to the report, the "Lower Small" segment has seen a 2.6-percent sales decline since October, while fuel prices have been on the rise. Despite their comparatively thirsty appetite for fuel, the industry publication notes that sales of large crossovers are up a whopping 61 percent over the same time period.

Part of the sales stories may center on the boom/bust cycle that comes as a result of new or aging models in each segment – the full-size CUV segment has received a raft of new models, including the refreshed Lambda triplets from General Motors, the Nissan Pathfinder and even derivatives like the new Sport model in the Ford Explorer family. Yet it isn't as if America's subcompact segment is stagnant – as Ward's points out, most of the players are two years old or less.

Sales losers in the first quarter of the year include the Mazda2 (pictured – down 51.9 percent), Toyota Yaris (-27.9 percent) and Hyundai Accent (-24.7), though other models including the Kia Rio and Chevrolet Sonic slipped as well. Conversely, the Nissan Versa and Ford Fiesta held their own, registering sales up 11.6 percent and 3.3 percent, respectively.

Part of subcompacts' sales problem may be due to the fact that those same automakers offer larger compact models whose fuel economy figures are comparable to that of their smaller counterparts. Further, pricing differences may not amount to all that much between the models – particularly in leasing situations where compact cars' typically command higher residual values. 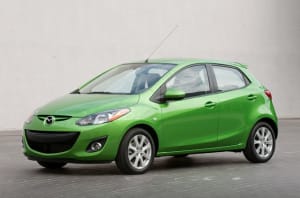