Last week, Toyota unveiled the all-new RAV4 EV and announced two important numbers: a $49,800 MSRP and a sales target of just 2,600 over the next three years. There's more to the story, though, as told to us by Bob Carter, group vice president and general manager of Toyota Division at Toyota Motor Sales U.S.A. The short version is that Toyota has taken the Prius lesson incredibly seriously.


We are the first to market with an SUV and we think that counts for quite a bit.

To wit: in creating the new Prius family, Toyota listened to the Prius rejectors about why they were not going to buy a Prius. They wanted more room (now see the Prius V) or a lower price ( Prius C). Carter said that the strategy worked, and that 79 percent of Prius C buyers and 67 percent of Prius V buyers are new to hybrid technology. The Prius Plug-In went through the same process, going on the road for over two years before launch. The hybrid represents Toyota's "small battery approach to electrification" and has sold surprisingly well thus far. With the RAV4 EV, Carter said, "We've created a compelling product," with "full Toyota quality," he said. Even though the RAV4 EV went from concept to production in less than two years. A typical vehicle takes almost four years. "There was no template for this project. There were no guidelines. Just a challenge to bring to market a premium EV. Toyota and Tesla engineers both rose to that challenge," he said.

Some more numbers: The RAV4 EV has approximately a 100-mile range, a 41.8 kWh li-ion battery pack, 73 cubic feet of cargo space, acceleration of 0-60 in seven seconds and "comfortable seating for five." Toyota's partner Leviton has created the official home-charging unit, a 40-amp, 240-volt station that allows for a full recharge in about six hours. There are three exterior colors and an exclusive interior fabric. Oh, and the RAV4 EV weighs around 470 pounds more than the RAV4 V6 but, since this weight is low and in the center of the vehicle and the chassis was tuned for this weight distribution, "it created an extremely comfortable ride and driving characteristic," Carter said, one that is better than the RAV4 V6.

Those numbers should appeal to anyone who's interested in a bigger EV. Carter said he knows that people who drive or have driven the first-gen RAV4 EVs – almost 1,500 of which were made from 1997 to 2003 – will be interested in this new version. "We've already been contacted by a number of those consumers," he said. The bigger question is how many others will be interested. Cater said:

Toyota is mindful of the challenges facing mainstream acceptance of battery electric vehicles. That's why our approach will be measured and focused. ... We plan to build about 2,600 vehicles over the next three years. We believe this measured introduction will allow us to, first, efficiently meet the demands of the market; two, meet the California ZEV mandate and requirements; and, three, continue to educate and develop the general public about our portfolio of advanced technologies. Because, in addition to this RAV4 EV, 2012 will also see the introduction of our compact iQ EV, designed for urban car-sharing programs as well as growing sales of the Prius Plug-In, the Prius C, the Prius C and the car that started it all: the new Prius.

So, again, why 2,600 RAV4 EVs? The best answer we could get is that this is the number Toyota feels is a good first step, not an over- or underestimation, a way to gauge consumer interest. Toyota feels "really confident" they can sell at least that many in the first three years. So, by some calculations, this is a ZEV " compliance car," but it's also a "real" car in the sense that people will actually be able to go buy it, and soon. Some people, anyway. We asked Cindy Knight, TMS' public affairs manager, why not sell it in Portland, OR or Seattle, WA, where one can imagine it would sell quite well? Her answer:

It's not something that we've dismissed, it's not something that we've planned for, either. Honestly, this is a wait and see attitude that we're adopting here. We're not the first to market. There are a substantial number of Volt and Leaf sales ahead of us and so we're not sure what's the rest of the market look like. We are the first to market with an SUV and we think that counts for quite a bit.

Of course, anyone can travel to California, buy a RAV4 EV and take it elsewhere, but there won't be any official service outside of the state. For now, anyway. If you'd like to see this change, your best bet is to tell Toyota directly. 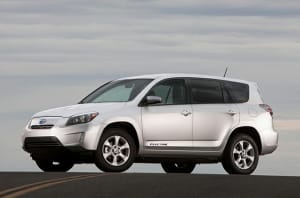