John Neff
I regret to inform you that despite what the image above indicates, Autoblog's long-term Mini Countryman will again be passing hands without having been thoroughly tested in the type of inclement weather for which it's been prepared. While we thought there was no way it would escape a February in Cleveland without slogging through weeks of snowfall, our Countryman's Bridgestone Blizzak WS-70 winter tires only met the cold stuff once, and then for only a day or two before everything melted. As I write this monthly recap on Leap Day, February 29, the temperature outside is 60 degrees and the sunshine is reflecting off my computer screen and into my eyes. What the hell is going on?

Keep your eyes locked on the official Autoblog Facebook page for the majority of our updates, as well as the official Autoblog Twitter account (@therealautoblog, look for the #ablongterm hashtag).
We're in the same boat as a lot of people who rightly prepared for winter by shoeing their vehicles with snow tires. Every errand on dry pavement is prematurely wearing down our tread while we wait for Old Man Winter to finally arrive and stay awhile. Fortunately, I've enjoyed the slightly softer ride afforded by the thicker side walls of our Blizzaks. I haven't tried our Countryman with its factory wheel/tire combo yet, but can say I wouldn't appreciate a ride any harsher than it is now.

Instead of slaloming between snow plows, I focused most of my attention on the Countryman's interior. In particular, I played a lot with Mini Connected, which is part of a $2,000 Technology Package (adding navigation costs $750 on top of that). I say "play" because, aside from basic tasks performed by every modern infotainment system like iPod integration and Bluetooth syncing, Mini Connected doesn't offer much in the way of useful features. It can do a neat trick with an iPhone or iPod Touch where it will literally broadcast the device's display and familiar menu structure onto the car's navigation screen, but the resolution is low and you have to be running the Mini Connected app on your iOS device. It's much easier to just plug in the device or connect via Bluetooth. Other features like the ability to access Twitter and RSS feeds for news held little value for me.

That said, I generally liked the Countryman's infotainment system, in particular the unique input controls. The joystick and two raised buttons in between the front seats are out of the way in their cramped confines, but still fall easily to hand and can be used without diverting one's gaze. While not the best interface I've ever used, I give Mini credit for doing the best with what little room it had to work with.

Speaking of little room, the Countryman is a small CUV, but my wife and I found it perfectly sized for our needs, which do not include kids. All four bucket seats are comfortable, though Mrs. Editor-in-Chief didn't appreciate the size of the bolsters, and we usually had enough room for groceries behind the second row of seats without folding them forward. I found the center rail that runs between the front and rear seats to be a gimmicky style choice that limits usability, but thankfully a rear bench seat is now an option. The cupholders, as well, are ridiculously small and designed only to hold 12-ounce cans.

We're currently in the market for a small crossover or hatchback and are considering other models like the Kia Sportage and Soul, Chevy Equinox and Volkswagen Jetta TDI Sportwagen, but the Countryman is head-and-shoulders above the rest in the area of driving enjoyment. Some have commented that the Cooper S Countryman model's 181-horsepower turbocharged 1.6-liter four-cylinder (shared among all Cooper S models) isn't powerful enough to pull around the weight of a CUV, but I found it more than adequate and even strong while accelerating through second and third gear. That said, I shudder to think how slow the 121-hp base model must feel.

So I'll pass the Countryman's key (actually just a plastic fob) back to editor/fleet manager Steven Ewing and be genuinely disappointed that it's leaving. I enjoy the style and fun that Mini offers with its models, but the Countryman is the first that's actually large enough for me to consider. Which I would, were it not for the one qualifier that will ultimately sink the Countryman every time: price. The only Countryman I would consider buying is a Cooper S All4 like our tester, which has a starting price of $27,750 that escalates quickly. The one I'm waving goodbye to has an as-tested price of $38,000, which is just too dear for my hard-earned dollars. 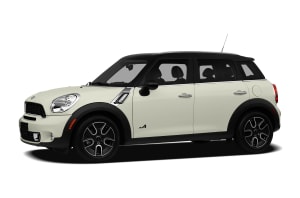