Volvo not bringing new V40 to these United States [w/poll] There are some cars we enjoy writing about more than others. Those tend to be the ones with the big horsepower numbers and seldom more than two doors, but the new Volvo V40 that was officially released today stands as an exception, because while it is hardly what you'd call exotic, it did pique our interest more than a workaday hatchback should. But we'll have to try not to like it too much, because we just received confirmation that it is not, we're sorry to report, coming to the United States.

In an email we received today from Geno Effler, head of public relations for Volvo Cars of North America, we were told that – and we quote – "The V40 is not coming to the United States." Rats.

Effler further states in the correspondence that "The V40 is not replacing an existing model; it is a new model." Which may be true enough, but we wouldn't be surprised to see the existing C30 hatchback, S40 sedan and V50 wagon all go the way of the dodo in due course.

But then we wouldn't be all that surprised, either, to see a three-door version spun off of the V40 to officially take the place of the aging C30, a sedan version to replace the even older S40 and maybe even a longer wagon to take the place of the V50. For now, however, this is one more stylish European hatchback we'll just have to admire from afar.

So do you think Volvo ought to change its mind and bring the V40 to these shores? Cast your vote in our informal online poll below. You never know who in Gothenburg might be listening. 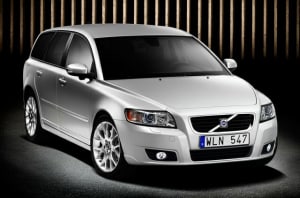