Zach Bowman
We all know what happens when Porsche and social media collide; the world gets another art car. As you may recall, the German sportscar manufacturer created a special version of its 911 GT3 R Hybrid when it crested one million fans on Facebook last February. Now, one year later, Porsche has garnered a staggering two million fans, and the company has taken it upon itself to slather a Cayman S in the faces of ts adoring supporters. With its red-tinted images on a white field, the design gives the Cayman S more than a passing resemblance to the famous Porsche 917 that garnered the company its first Le Mans win.

Porsche plans to display its Facebook Cayman S at the Porsche Museum in Stuttgart until January 27. For those of us who can't make the jump to Germany, Porsche has created a special site that provides 360-degree views of the car as well as search function to help you find your face on the Cayman. Head over to the site to check it out.

UPDATE: Porsche has clarified that every fan's face is not, in fact, on the 2-Mill Cayman due to Facebook requiring the automaker to ask permission before they could use people's pics. So unless you opted in for the stunt, don't look for your mug. 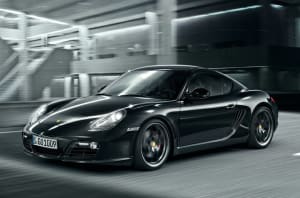