Zach Bowman
Two Pennsylvanians recently found themselves in trouble with the law after vandalizing a 2006 Ford Fusion in a decidedly inventive manner. Patricia and Quentin Deshong, 25 and 22, respectively, are staring down the barrel of charges ranging from attempted arson to public drunkenness, criminal mischief and making terrorist threats. The Deshongs reportedly broke or cracked multiple windows in the vehicle, ripped various hoses from the engine bay and attempted to set the vehicle ablaze by sticking lit tampons into the fuel tank and oil cap. They were not successful.

Investigators aren't certain why the Fusion found itself on the raw end of the Deshongs' rage. The vehicle is owned by 25-year-old Falon Clark, and while Clark and Patricia Deshong are reportedly Facebook friends, Clark's page states she's currently "lookin for some revenge..."

Gary Boggs, a friend of Clark's, told Pennsylvania state troopers Patricia Deshong threw a beer bottle through the back glass of his Ford F-150, though it's unclear when that incident happened or how Boggs knows the Deshongs.

After officers arrived on the scene, the Deshongs were found to be under the influence of alcohol and Patricia had the license plate and registration to the damaged Fusion on her person. She was charged with theft as a result. Both individuals were then released after they each posted a $25,000 bond, but not before Patricia took the time to threaten that she was going to "f***ing kill" a trooper," landing her the terrorist threat charge. 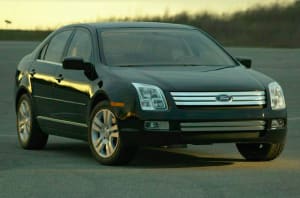