Los Angeles Superior Court Commissioner Douglas G. Carnahan was presented this week with the small claims court case by a Los Angeles-based Honda Civic Hybrid owner who alleged fuel-economy misrepresentation, but declined to rule on the case and said he will mail out the decision, the Los Angeles Times reported. Honda representatives refuted the plaintiff's allegation that she was misled.

The plaintiff, 46-year-old Heather Peters, eschewed a class-action case against Honda and instead sued the automaker for the small-claims maximum of $10,000. Peters alleged that Honda advertised her 2006 model to get about 50 miles per gallon but that the car never achieved more than 42 miles per gallon and that the car's fuel economy fell to less than 30 miles per gallon after a software update was performed on the vehicle, the newspaper said.

Honda representative and technical specialist Neil Schmidt said Peters' claim was "ridiculous" and that the automaker wasn't responsible for fuel economy figures reached through independent testing, according to the Times. American Honda spokesman Chris Martin said the automaker offered to work with Peters on the findings but that the plaintiff rejected the offers, adding that Peters wasn't deceived.

Honda was the defendant in a class action lawsuit filed in 2007 stemming from what plaintiffs said was an overstatement of the car's gas mileage figures in its EPA ratings for the 2003-07 model years. While the ratings were 49 miles per gallon in the city and 51 miles per gallon highway, some plaintiffs said they were getting as little as 31 miles per gallon. Honda's Civic Hybrids from 2008 on weren't included in the suit because the EPA changed the methodology for calculating average fuel economy for hybrids so that the ratings would be more realistic.

Honda settled the class-action lawsuit out of court in 2009. The proposed settlement gave Civic hybrid drivers the option to get either up to $1,000 off the purchase of a new Honda or a $100 check if they could prove they complained to Honda about the mileage. After the case was settled, 26 state attorneys general called the settlement "not fair, adequate or reasonable" because the attorneys in the case made far more than the plaintiffs did. 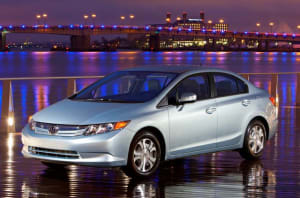