Acura RL replacement coming in April, TL or TSX to be killed

Acura is bringing Goodies to the Detroit Auto Show – the capital "g" warranted for the NSX concept alone – but it has more aces in more sleeves: Car and Driver reports that the RL replacement is coming to the New York Auto Show. The RL is made up of some nice pieces, but even with heaps of cabin tech and SH-AWD it has never been able to outsmart its overwhelming anonymity – or its larger and less costly sibling, the TL.

The next round of RL is meant to bring a sedan that embodies Acura's brand values, in this case said to mean "relatively lightweight, nimble, and economical," and perhaps not called RL. It does not mean an eight-cylinder, however, with a V6 plus working the front wheels and two electric motors on duty at the rear. Space is said to rival a BMW 7 Series, while exterior dimensions will hover around those of the 5 Series. We just hope those dimensions are draped sheetmetal that's memorable for all the right reasons, not the wrong ones.

But Acura's lineup switch means there might not be enough room for both the TSX and TL (pictured) in between the new RL on top and the Civic-based ILX sedan coming in at the bottom C/D see the permutations of either sedan being pruned, even though, like us, they find it less believable that the solid-selling TL would disappear. It's posited that the new RL could change its name to TL, but that seems least plausible – after all, Prince already showed us how awful it would be to have to call your sedan "The Model Formerly Known As RL." More substantial answers will come in New York on April 4. 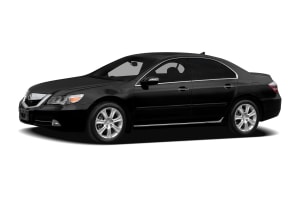