Word is that Land Rover is considering a brawnier version of the company's new Evoque. Autocar reports that engineers have already snugged a 300 horsepower version of the Ford Ecoboost 2.0-liter four-cylinder engine into the CUV's engine bay. David Mitchell, program director for the vehicle, has already driven the high-performance mule and says that the chassis can take the extra power. Still, the project hasn't been given the green light. According to the UK publication, the biggest hangup is that Land Rover doesn't really have the marketing structure in place for a performance variation.

Currently, the company's sportier models are branded with the Supercharged moniker, but that's something that clearly wouldn't work on a turbocharged four-cylinder model. Autocar quotes Mitchell as saying that Land Rover would have to look into alternative badging or even a sub-brand for the more athletic Evoque. Currently, the most powerful Evoque available comes with a considerably more modest 237 horsepower. 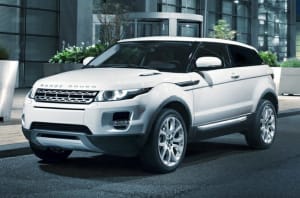