Hypermiler extraordinaire Wayne Gerdes and his colleague Chris Bernius have set a new Guinness World Record for the lowest fuel consumption in a gasoline hybrid vehicle while driving through the 48 adjoining U.S. states. At over 64 miles per gallon, Gerdes, Bernius and the 2011 Kia Optima Hybrid have found a home in Guinness' record books.

The lightfooted duo piloted a bone-stock 2011 Kia Optima Hybrid along a 7,899-mile route across America and achieved an average fuel consumption of 64.55 mpg, crushing the vehicle's official EPA highway rating of 40 mpg (highway).

The record attempt was verified by Philip Robertson, Adjudicator at Guinness World Records, who presented Gerdes and Bernius with their certificate at an official ceremony at Kia Motors' manufacturing facility in West Point, GA yesterday. 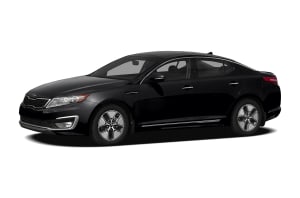