Noah Joseph
With 390 horsepower on tap and a five-second 0-60 time, the Infiniti FX50 crossover really doesn't need much in the performance department. But merely "fast enough" isn't a term you'd commonly associate with Sebastian Vettel.

The defending Formula One World Champion drives an FX in his down time, serves as Infiniti's brand ambassador and has lent a capable hand or two in the development of the latest concept car coming out of the Nissan luxury division. The special Vettel edition has been anticipated for a few months now, but will finally be unveiled at the rapidly approaching Frankfurt Motor Show next month.

Just what specifications the special edition will encompass remains to be seen, as the short press release after the jump is conspicuously light on details, but from the solitary image released so far, we can tell it looks like one very mean performance crossover, with new aero bits, lighting, wheels and badging among the changes.
Show full PR text
SEBASTIAN VETTEL TO UNVEIL HIS PERFECT INFINITI

ROLLE, Switzerland (August 28, 2011) - Infiniti today releases the first image of its concept car to star at the Frankfurt Motor Show on September 13. It will be unveiled by the Infiniti FX driver who helped design it: reigning Formula One World Champion, Sebastian Vettel. 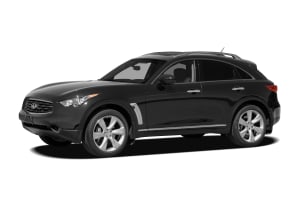