Steven J. Ewing
Lexus may have debuted the 2012 GS 350 as part of last week's Pebble Beach Concours d'Elegance festivities in California, but the automaker isn't quite done with the rollout of its new rear-wheel-drive sedan. Seen here, Lexus has just released two teasers of two more models in the GS range: the sportier looking F Sport and hybrid-enhanced GS 450h.

Like the rest of Lexus' F-Sport treatments, we don't expect the GS F-Sport to be much more than a trim-and-tape job, though some suspension tuning may be in store for this model. It's been long rumored that Lexus is preparing an honest-to-goodness GS F performance model, so the F Sport trim ought to be similar to what the automaker offers on its smaller IS sedan.

The GS 450h will likely use the same 3.5-liter V6 and electric motor setup that's found in the current car, though some small massaging should hopefully improve fuel economy ever so slightly. We'll have the full details on both cars later this year. 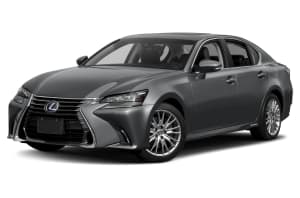