View All Specs
Big Diesel Power With A Touch Of Class

We're not exactly sure when it happened, but pickup trucks have long since elevated themselves beyond mere tools of the trade. Once bare-bones, utilitarian hardware with more capability than comfort, the truck has evolved into a status symbol. Move out of any urban center and into the surrounding sprawl, and lifted, diesel-chugging, three-quarter-ton pickups are fairly commonplace nowadays. And we're not just talking about rides parked outside work sites, mind you. These days, you're every bit as likely to see them parked outside the local Panera.

As you might expect, automakers are happily feeding the fire, offering a range of trucks that few will use to farm or do backbreaking labor, despite monikers that suggest otherwise. Names like King Ranch and Laramie have fed buyers a line of very profitable trucks loaded with leather-swaddled cabins and every imaginable creature comfort. General Motors is no stranger to this approach, as its GMC Denali line now extends to its monster-sized pickups. We slid behind the wheel of the 2011 GMC Sierra Denali 2500 4WD Crew Cab to see just how the big gilded beast fits into America's pickup truck landscape.
The Sierra Denali 2500 wears the same squared-off sheetmetal as its less gentrified counterparts, though GMC has slathered chrome everywhere to help set it apart from the rest of the line. Most of it adorns the Denali's new latticework upper and lower grille. All of that flash certainly helps draw attention, but it's the sheer height and width of the truck that ensure you'll have no problem spotting the crew cab in the parking lot. At 78.3 inches tall, the heavy-duty Sierra's roofline towers over its neighbors.

With 20-inch polished aluminum five-spoke wheels wrapped in relatively thin 265/60R20 Goodyear Wranglers, we'd be wary of hopping any curbs at speed for fear of popping a tire. The street-oriented wheel/tire package is obviously geared more toward downtown grazing than foraging out in the wild. A set of optional chrome running boards and door handles match the wheels nicely, looking sharp against our tester's black paint.

Inside, it's the familiar GMC Sierra layout, though the cabin is finished with slightly nicer materials and options. Dark faux wood trim adorns the dash, center stack, center armrest and door panels as well as the steering wheel. Our tester was fitted with black leather touches on the wheel, shift lever and seats, though the hides felt cheap to the touch. Unfortunately, the same can be said for the majority of this GMC's cabin. With its dated touchscreen navigation system and chunky center stack, the Sierra's dash is beginning to look its age, especially when compared to similar offerings from the Ford Super Duty and Ram HD teams. The GMC cross-town rivals have taken the time to work over their cabins to provide better quality leather as well as dash and center console designs that don't look or feel like they were lifted from 1997.

The good news is that there's nothing functionally wrong with the equipment. Thanks to the familiar design, all of the controls are intuitive and easy to use without getting lost in a sea of buttons or confusing navigation drop-down menus. While we can forgive a work truck its bare-bones innards, our tester came packing a $61,774 MSRP, including a $995 destination charge. That kind of coin could leave buyers itching for a little more when it comes to materials and design, especially when it comes to the navigation's price tag. Our tester featured the company's $2,250 touchscreen navigation package – ludicrous money in a time when every smart phone comes with a serviceable nav app for a buck.

The Denali trim level includes dual-zone climate control, a 12-way power adjustable driver's seat and Bose audio, but if you want extra goodies, you're going to have to pay for them. Heated and cooled front seats add an additional $650 and a rearview camera tacks on another $450. We were also treated to a sunroof with an $895 price tag. Given how useful the camera is on this truck, it's money well spent. Otherwise, we could probably get by just fine without most of the additional equipment.

The biggest option on our Sierra's Monroney was the beast under its giant hood: a $7,195 Duramax 6.6-liter turbodiesel V8 engine making 397 horsepower at 3,000 rpm and 765 pound-feet of torque at 1,600 rpm. The engine uses Diesel Exhaust Fluid to keep its emissions clean; a full tank will cover around 5,000 miles depending on your driving habits before putting the truck in limp mode. We took the time to top off the exhaust fluid tank on our tester. Check out the Short Cut below for a look at the process.


In our tester, the Duramax was bolted to an optional Allison six-speed automatic transmission for $1,200 and four-wheel drive, making for one of the most desirable drivetrain options in the GM fleet. For 2011, GMC has made a variety of towing equipment standard, including tricks like intelligent brake assist, a diesel exhaust brake, trailer sway control and hill-start assist. Our tester was also wired with an integrated trailer brake controller.

With all of that gear, the Sierra Denali 2500 can tow up to 13,000 pounds from a regular ball hitch and 16,800 pounds using a fifth-wheel setup. Unfortunately, we didn't get a chance to hook any toys up to the rear of the 2500 during our time with the truck, so we can't accurately say how it performs under load. As it's one of the key attributes of this truck, next time, we'll make a point of doing so.

Even without pulling any earth-moving equipment around the neighborhood, we observed in-city fuel economy of around 16.5 mpg, not shabby at all once you remember that the 6.6-liter turbodiesel V8 has enough torque to snap most driveshafts like takeout chopsticks.

Despite its polished image, there's no hiding the fact that this is a three-quarter ton ox. Though the revised Duramax diesel starts on the first flip of the key and idles quietly enough, this isn't really a vehicle designed to be comfortably driven every day. The large seats, while highly adjustable, are equipped with stiff cushions that only serve to amplify the truck's rigid suspension. Will it probably ride better with a full load? Undoubtedly, but the truth is that the majority of owners will probably spend more time driving empty than under a full load.

The six-speed Allison automatic rows its gears precisely and accurately. It's far and away the best gearbox in the line, and it handles the big diesel eight's grunt without biting its nails. Unfortunately, in their quest for Ford-besting power figures, the engineers at GM have designed a surprising amount of turbo lag into the 6.6-liter Duramax. Sixth gear allows the engine to churn along at well below 1,000 rpm, but jumping on the fuel in anticipation of an interstate pass will keep you waiting as the engine builds enough revs to hit the magic 1,500 rpm mark. The power, while impressive, isn't instantaneous. That lag is noticeable compared to the 2010 Duramax, which brought a still-muscular 365 horsepower and 660 pound-feet of torque to the engine bay.

Fortunately, few buyers are going to be pulling jack-rabbit takeoffs or jumping lanes in traffic. The Duramax is built to haul big loads over long distances, not to sprint. GM has made certain that its diesel offering remains competitive against the Powerstroke and Cummins competition, albeit at a price. Dialing up the power has had an impact on the Sierra 2500's basic drivability. While buyers who use the vehicle at the upper limits of its towing capacity will likely enjoy the extra muscle, most consumers who purchase at this trim level simply want the on-demand power of the 2010 engine. If you're looking for a capable truck that looks as sharp in the office parking lot as it does on the job site, you may be better off sticking with the smooth power of the base 6.0-liter V8.

A simple solution to the diesel's power delivery problem would be to offer buyers selectable program modes similar to what the diesel aftermarket currently delivers. By altering boost and fuel levels, a clever computer could easily tailor the engine for fuel economy, power or drivability.

Even with its turbo lag and aging interior in place, the 2011 GMC Sierra Denali remains an impressive truck. If it were our money on the line, we'd likely skip the silver-plated belt buckle treatment of the Denali package and opt for the standard 2500 HD. Buyers looking for a few more creature comforts may be more satisfied with the interiors of the Ford Super Duty King Ranch or the Ram Trucks 2500 Laramie lines, but in terms of outright capability, the Sierra Denali is built to work. 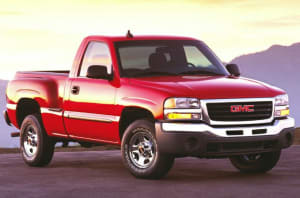