Ah, the Honda Crosstour. The oddly shaped, curiously impractical crossover carries on for another model year, albeit with a slightly shortened name. That's right, for 2012, Honda has dropped the ' Accord' name from the Crosstour, meaning it will now have to stand alone in the automaker's lineup (and on the company's sales charts, natch).

Name change aside, there aren't many big updates for the 2012 model year. Base EX models now benefit from standard auto on/off headlamps, rear-view camera, Bluetooth and USB audio interface. Add a few new colors to that list, and we've wrapped up the whole list of updates for 2012. Pricing starts at $30,340 for the entry level 2WD EX, excluding $810 for destination.

The Crosstour continues to be powered by Honda's tried and true 3.5-liter V6, producing 271 horsepower and 254 pound-feet of torque, mated to a five-speed automatic transmission. Curiously, there's still no four-cylinder option, though that may change after an updated inline-four debuts in the CR-V later this year.

Follow the jump for Honda's full press blast about the 2012 Crosstour, and remind yourself of its not-so-pretty face in our attached high-res image gallery. If we're honest, it's still a little sad that we live in a world where the Honda Element can no longer exist, but the Crosstour continues to live.
Show full PR text
2012 Honda Crosstour Brings Sleek Design to Functional Crossover Vehicle

The Crosstour's exterior design emphasizes a bold, aerodynamic look that also conceals an accommodating rear cargo area with a large, lift-over tailgate. Premium interior styling, appointments and details extend from the passenger compartment all the way through the cargo area. An under-floor storage area in the rear of the vehicle adds functionality, while reversible cargo floor panels accommodate dirty objects.

The Crosstour comes standard with a 3.5-liter i-VTEC V-6 engine with Variable Cylinder Management (VCM) for power and efficiency. The engine produces 271 horsepower at 6,200 RPM and 254 lb-ft. of torque at 5,000 RPM, while achieving an EPA-rated city/highway/combined fuel economy of 18/27/21 mpg2 on 2WD models. Meanwhile the Crosstour EX-L with Real Time™ 4WD delivers an EPA-rated city/highway/combined fuel economy rating of 18/26/21 mpg2.

To maximize efficiency, the engine's VCM cylinder deactivation system is programmed to run on 3, 4 or 6 cylinders, based on current power requirements, and a technologically advanced 5-speed automatic transmission is standard equipment. For true utility-vehicle capability, the Crosstour provides 6.2 inches of maximum ground clearance in addition to the available Real Time™ 4WD system.

The Honda Satellite-linked Navigation System3 and the Real Time™ 4WD mentioned above are available together or separately on the Crosstour EX-L. The Navigation system includes a rearview camera with guidance lines integrated into the display.

The Crosstour is assembled in Ohio at the Honda of America Mfg., Inc., East Liberty Auto Plant using domestic and globally sourced parts. 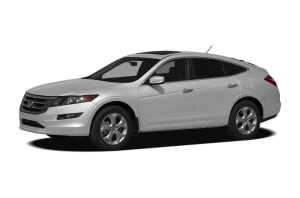