Chalk one up in the win column for Chrysler. The 2011 Dodge Durango has earned the title of Top Safety Pick from the Insurance Institute for Highway Safety. That's a nice step forward over previous generations, which failed to achieve the honor. Now, however, any Durango built after May of 2011 can wear the safety crown proudly.

In order to get the Top Safety Pick award, the 2011 Dodge Durango needed to score a 'good' rating in front, side, rollover and rear crash tests. That's precisely what it did, and in doing so, it joins seven other Chrysler models that also earned the title of Top Safety Pick. The Durango can stand alongside the 2011 Jeep Grand Cherokee, Chrysler 300, Dodge Charger, Chrysler 200 sedan, Dodge Avenger, Dodge Journey and Jeep Patriot (when equipped with available seat mounted side airbags).

Check out the video of the side impact test after the jump. Be sure to read the full press release from the IIHS after the jump, and check out the gallery of the particular 2011 Dodge Durango that was put out to pasture for the good of the model.

Dodge Durango has been named a "Top Safety Pick" for 2011 by the Insurance Institute for Highway Safety (IIHS). The IIHS recognizes vehicles that perform "good" in front, side, rollover and rear crash test evaluations performed at its Vehicle Research Center in Virginia. This award applies to Durango models built after May 2011.

"The Durango is the eighth vehicle from Chrysler to earn the Institute's highest safety honor," said IIHS president Adrian Lund. "The performance of the Durango means buyers are getting the best protection in the most common kinds of crashes, and electronic stability control for avoiding many crashes altogether."

"With the latest addition of Dodge Durango, coupled with the new Jeep Grand Cherokee and Chrysler 300 and Dodge Charger, Chrysler Group has eight Top Safety Picks for 2011. This recognition by the IIHS underscores our commitment to engineering safety and security technology across all vehicle segments," said Scott Kunselman, Senior Vice President – Engineering, Chrysler Group LLC. "As we continue with our product transformation, we'll continue to engineer new technology and more capabilities into all our vehicles."

With its four-wheel independent suspension and responsive steering and handling, Durango puts the "Sport" in Sport Utility. No other SUV on the road compares with the all-new Dodge Durango's distinctive bold Dodge design that craftily houses a spacious three-row, seven-passenger functional, flexible and premium interior, covered in soft-touch materials. Durango features more than 30 storage areas, 28 seating configurations and a rear cargo area of nearly 85 cubic feet that fits a 6-foot couch with room for coffee table or a 10-foot ladder with the front passenger seat folded flat.

Durango also delivers the perfect blend of power and fuel efficiency. Its award-winning 3.6-liter Pentastar V-6 engine delivers best-in-class 290 horsepower along with a best-in-class driving range of 500 miles on one tank of fuel – that means Durango owners could drive all the way from Chicago to Nashville; San Diego to San Francisco; or New York City to Boston and back again without needing to stop for fuel. The available HEMI V-8 engine with Fuel Saver multi-displacement technology delivers a best-in-class 360 horsepower and 390 lb.-ft. of torque. Both engines deliver best-in-class V-6 and V-8 towing with standard trailer sway control on all models (V-8 up to 7,400 lbs. and V-6 – up to 6,200 lbs.). Durango also features more than 45 safety and security features. 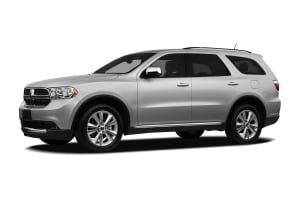