Noah Joseph
This past weekend, the Formula One circus rolled into Eifel for the German Grand Prix. And though it was campaigned once again at the Nürburgring, the race was held on the GP-Strecke. The infamous Nordschleife hasn't been used for F1 racing since the early 80s, when it was deemed too dangerous for modern open-wheelers. But while they were on site, championship leaders Sebastian Vettel and Mark Webber and their sponsor Infiniti didn't miss the opportunity for a little wheel-to-wheel action around the Green Hell.

The Renault- Nissan Alliance's premium marque that powers Seb's and Mark's Red Bull race cars put the duo on the Norschleife in a pair of Infiniti Ms, but here's the kicker: while Webber got the keys to the M37s sport sedan, Vettel climbed into the M35h hybrid.

So which driver had the advantage? Considering that Infiniti claims that the M35h is the world's quickest hybrid sedan and its most powerful car on the market – hitting 62 mph from a standstill in 5.5 seconds versus the conventional M37s' 6.2 – it looks like Vettel was set to get the jump on his elder wingman once again. Follow the jump to watch the video footage to find out.

Red Bull Racing drivers Sebastian Vettel and Mark Webber started their German Grand Prix weekend early this week, when they took each other on racing around the famous Nordschleife circuit in high performance Infiniti road cars.

The team mates, currently leading the Formula One World Championship, were given the keys to a 3.7 litre V6 Infiniti M37s and an Infiniti M35h – Infiniti's most powerful car to date and the fastest accelerating production hybrid in the world. They competed for one high speed lap around the legendary 14 mile (22.8km) track demonstrating truly Inspired Performance. 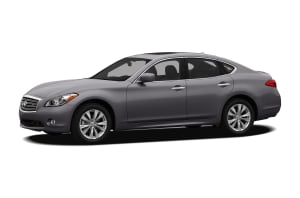