The Chevrolet Impala hasn't had many updates since it last received an overhaul for 2006, but that changes for 2012, at least in the area of powertrains. As we told you back in May, the otherwise untouched Impala will receive General Motors' tried and true 3.6-liter V6 for 2012. The direct-injected engine boasts 302 horsepower and 252 pound-feet of torque – a far cry from the 211-horsepower, 3.5-liter V6 it replaces. Heck, even the optional 3.9-liter V6 could only muster 230 horsepower.

To sweeten the pot a bit more, the Environmental Protection Agency's website now verifies that the 2012 Impala can hit 30 miles per gallon on the highway. That's better than the 29 mpg of the outgoing model, though the '12 model could only manage 18 mpg in city driving, while the '11 model registers a tick better at 19 mpg. While the combined fuel economy of the two models is likely still the same, it's hard to argue with an extra 91 horsepower without a penalty at the pump.

We're still waiting on Chevy to cough up images of the updated 2012 model, but if you've somehow forgotten what the ubiquitous Impala looks like, you can check out our gallery of the 2011 model above. 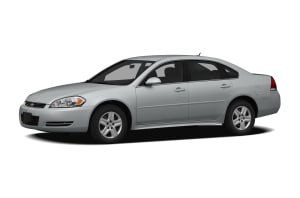