View All Specs
Add a Review
Man, that 494-horsepower Porsche Panamera Turbo you're driving is hot. The best $136,700 you ever spent, eh? Geeze, you even got the $2,440 Sport Chrono Pack Plus, so those 60 mph runs must flash by in 4.0 seconds flat, sometimes less, thanks in no small part to the 567 pound-feet of torque overboost. Damn. There isn't a four-door out there that can even come close. You're the king of the county, sir.

A stop sign appears in the middle of nowhere, and it's time for some safe Launch Control excitement. It would have been nice to opt for the Sport exhaust, yeah, but who needs it? Silly Porsche price-gouging options lists. Pshaw.

But hang on – what just pulled up alongside? Hold on here... another Panamera? And it sounds different. Oh, crap, those 20-inch 911 Turbo II wheels are wrapped in specially concocted performance tires with sidewalls that just read " Michelin." And its got Porsche Exclusive side skirts, thick black-lacquered window trims, and that exhaust. Oh, maaaaaan, it's the Panamera Turbo S you read about. The one with 543 horses and 590 lb-ft of overboost torque. They keep blipping the throttle, too, like they want to play. The whole car is shaking like a bull in the stall at a rodeo. With the specific Sport Chrono Turbo fitted as standard, they say it'll scorch the 60-mph run easily in just 3.6 seconds.

Ah, the power of the letter "S" in Porsche-speak. It all seems so silly, but it's sickeningly important for those select few who are in a position to shop for Porsches. After a quick spin in this $173,200 (+ $975 delivery) Autobahn-breaker, it is clear that, for the moment, nothing comes close that has four doors. Maybe the upcoming latest Mercedes E63 AMG with its 5.5-liter bi-turbo V8 and Performance Pack could make an attempt at wrenching and wringing out the cockles of our high-performance luxury heart, but we doubt it already. The combo of that ungodly awesome Panamera interior, an exterior that always stands apart and is forever growing on us, the "M48" 4.8-liter bi-turbo tuned to its hilt, the sheer feeling of grounded substance while at the wheel, and the four seriously adult seats makes this particular Panamera the pinnacle of the performance sedan world.

And those who will undoubtedly keep commenting on what an abomination the entire Panamera range is to the hallowed Porsche legend – it's a free country – have obviously never driven or been driven in one. We've just returned from hauling tush on the no-speed limit Autobahns around Munich, Germany in this Turbo S momentum-monger, and, had said doubters been able to accompany us, they'd have cried uncle. We sat smack on the 190-mph limit for three dry runs of more than a few miles each, and the experience sweetened further our own longtime begrudging thoughts regarding the Panamera. Hunkered down in our own "blurred landscape" mode with the Sport Chrono's Sport Plus button lit up and four exhaust tips blaring, in that moment this Porsche was the sweetest of cars.

Apart from intermittent lulls of uncooperative traffic bottlenecks and seriously inclement weather, we didn't want to un-light the Sport Plus button nor soften the Porsche Active Suspension Management much. The press kit tells us that the Porsche Panamera Turbo S weighs in at 4,400 plus pounds, but the onboard tech and chassis setup convince us we're in a really sizable, roaring 911 Turbo S. The inner-ear and seat-of-the-pants sensations while strafing along curve-loaded two-lanes, or while stretching out everything it's got on the fastest fast lanes of its home turf are so to the extreme.


Something this large handling itself and us so tightly just makes us laugh when we do quick comparos in our head with any Aston Martin. The V12 Vantage is probably the only one capable of staying somewhat even, and it's only got two doors. A Maserati Quattroporte Sport GT S couldn't even come close and wouldn't feel anywhere near as calm and collected while trying. Guess we'll have to wait for that promised "everyday" four-door Lamborghini based on the Estoque concept. Ferrari still sighs heavily whenever anyone asks the four-door question. Too bad; Maranello could make a really good one.

Up until driving this S-ified Turbo trim Panamera, we never really obsessed over these big-GT debates. Basically, all things you can order to add to your Panamera Turbo, including the Powerkit Panamera Turbo (normally $21,730), come standard on a Turbo S. The $5,000 (but standard here) anti-sway police provided by Porsche Dynamic Chassis Control works together with the nimble electronically controlled Porsche Torque Vectoring Plus at the rear axle differential to straighten out the most demanding curves.

At this level of heavyweight performance, that the Porsche Ceramic Composite Brake system remains an $8,840 option is a bit of a joke. If you want to go to the extremes where this car just took us, PCCB needs to be standard, just as the seven-speed PDK gearbox with its far better paddle-shifting Sport steering wheel and 20-inch wheels (9.5-inch wide front and 11.0-inch wide rear) and sport exhaust are standard. If you want the "composite" aluminum-lead discs, stick with the Turbo without the "S." We'd even say that a six-speed manual gearbox here would work wonders for a small but lucky percentage of drivers.

Calmly urging around the recently tested Panamera S Hybrid versus the drama of chucking around the nearly twice as expensive Turbo S – which incidentally gets the same 23-mpg EPA highway rating as the Turbo – has shown us the tempting extremes of this impeccably executed Porsche.

We'd take any Panamera in a heartbeat over any equivalent-trim Cayenne, even if that might put us in the minority. Go ahead, shower us with your heckling. 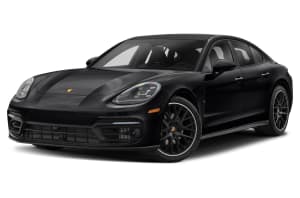 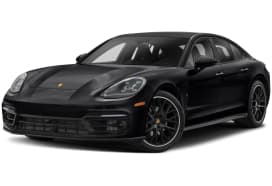