I had been anticipating the pre-dawn run to the airport for a few days. Having spent the week with a Porsche Panamera Turbo, complete with the torque-boosting Sport Chrono pack (yes, that one), the blast to SFO was a fitting sendoff. It was also perfectly timed.

I was boarding a marathon flight to Austria for the global launch of the Panamera S Hybrid, and after seven days with the Turbo, I was smitten. And concerned.

While the 500 horsepower and 568 pound-feet of torque from the boosted V8 proved the old adage about absolute power corrupting absolutely, it was the completeness of the Panamera package that left me slack-jawed. When the Stuttgart brain-trust puts its mind to something, they do it right. Look no further than half a century of rear-engined evolution and the much-maligned, but incredibly capable Cayenne. Now add the Panamera to that list. Its sheetmetal might not suit your tastes, but Porsche managed to create the best driving luxury sedan on the market. But a hybrid? They'd better not screw this up.

Porsche is calling this the world's fastest production hybrid and the most economical Porker of all time. With a 0-60 mph time of 5.7 seconds and a top speed of 168 mph, Porsche nailed the numbers for quick and fast. But with a starting price of $95,000, the "economical" claim is tough to swallow.

However, based purely on fuel consumption, Porsche's PR people have a point. The automaker pegs consumption at 6.8 liters/100 km on the Euro cycle (down from 10.3 for the S' 4.8-liter V8). U.S. EPA figures haven't been released yet, but figuring the Cayenne Hybrid – equipped with the same drivetrain and coming in some 600 pounds heavier – manages 20/24 mpg, a combined figure in the high 20s should be easily within reach.

So what about that drivetrain? It's a variation of the setup fitted to the aforementioned Cayenne and its Volkswagen sibling, the Touareg Hybrid. It starts with VAG's supercharged 3.0-liter V6, outputting the same 333 horsepower you'd get in the Audi S4. Sandwiched between the V6 and the eight-speed Tiptronic S automatic transmission is a 34kW (47-hp) electric motor that brings overall output up to 380 hp and makes this Panamera the world's first full parallel hybrid luxury sedan. The engine alone produces 325 lb-ft, but with the 221 lb-ft of torque created by the electric motor, maximum twist comes in at a claimed 428 lb-ft. The torque curves of the engine and motor meld seamlessly, with peak torque from the electric motor beginning at 1,150 rpm and bleeding off just as the ICE's supercharged torque kicks in to provide uninterrupted shove from 3,300 to 5,250 revs (redline stands at just over 6,500 rpm).

The combined effect is instant-on passing power at the drop of the throttle; not nearly as much horizon-come-hither thrust as the Turbo, but noticeably more than the V8-powered Panamera S, with it's comparatively paltry 369 lb-ft.

So yes, it's quick. And yes, it's smooth. And the eight-speed transmission is quicker and more refined than nearly anything else out of Germany or Japan. But to win on the technology and fuel economy front, the Panamera S Hybrid has to do more than just be another quick Porsche. And that's where it succeeds and surprises.

As you'd expect from any modern hybrid, the Panamera allows you to motor along under electric power as soon as you twist the key. Porsche claims you can hit speeds up to 52.8 mph in "favorable driving conditions" without ever tapping into the V6. However, even the lightest feather-foot would be lucky to max out at 15 or 20 mph before the internal combustion engine kicks in to provide additional motivation.

Try as we might, we could never get over 25 mph without having the V6 turn over, even after pressing the E-Power button to modify the throttle mapping, and we suspect that even in the mythical ideal conditions, the average driver will never get past 30 mph without gasoline assistance. But what's more impressive is the Panamera's engine shut-off at "sailing speeds." By easing off the throttle – up to a maximum of 103 mph – the V6 shuts down and the tach drops into the "Ready" mode. The transition is utterly and completely seamless (we could barely hear the engine at part throttle to begin with), and there's nary an ounce of lag or drivetrain shutter as the V6 restarts. It's easily the most fluid, refined changeover we've experienced in a gasoline-electric vehicle.

The cost of all this tech – beyond the $5,000 premium over the V8 S, marginally mitigated by additional standard features, including adaptive air suspension – is weight. The air-cooled, 288-volt nickel-metal hydride battery mounted low in the trunk only weighs in at 160 pounds, and marginally reduces trunk capacity by 110 liters, but overall weight is up over the S by nearly 400 pounds. Despite this, and thanks to an admirable 51:49 weight distribution in the only drivetrain configuration available (rear-wheel drive), the Hybrid drives as well as its conventionally powered siblings.

The electrically-assisted, speed-sensitive steering takes the prize for directness and communication, while the brakes, which come on abruptly during the first 1/4 inch of travel, smooth out to provide linear, fade-free deceleration with the slightest hint of regen. Eighteen-inch wheels with 245/50 R18 rubber in front and 275/45 R18 rollers in the rear come as standard, but the 19-inch wheels on our tester (equipped with 255/45 R19 front, 285/40 R19 rear Pilot Sport A/S Plus tires) still looked undersized when nestled into the cavernous wheel arches. And we'll be the first to admit that the "hybrid" badging on the doors looks as ostentatious as the tacked-on afterthought they are (10 minutes with a hair dryer and some dental floss should rectify that).

While cost-conscious Europeans might be more inclined to opt for the forthcoming diesel Panamera, the Hybrid S has a sort of twisted, techie appeal that we can't seem to get over. It might be slightly compromised over its V6 and V8 brethren, but the overall demeanor and driving experience comes through as pure Porsche: highly involved, remarkably well executed and drawing a bead on evolving the hybrid equation into more than just a lackluster, fuel-sipping conveyance for the environmentally conscious. It's not just a worthwhile addition to the Panamera family, it's a legitimate alternative for V8-averse luxury buyers. And knowing Porsche, it's obvious I shouldn't have worried. 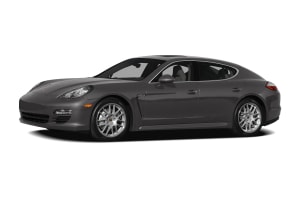