Chris Shunk
The Ford F-150 has been the best-selling truck in America for decades. That's a very big feather in the Blue Oval's cap, but when the truck line is bit by the recall bug, its massive volume can be a very bad thing.

The Detroit News is reporting that the National Highway Traffic Safety Administration has announced that it has upgraded its investigation into 2.7 million 1997-2001 F-150 pickups for fuel tank straps that have rusted and failed. If the straps rust and fail, NHTSA says there is a chance that the tank could drop and hit the road, causing a fuel leak. Back in September, NHTSA's initial investigation included 1.4 million vehicles.

Of the 339 complaints NHTSA and Ford have received so far, one has resulted in a brief fire that quickly flamed out, while a second complaint lead to a fire that actually destroyed the vehicle. According to the report, there have been a total of nine documented incidents in which fuel has leaked from the tank as a result of a failed tank strap, though there have no injuries linked to these incidents.

For its part, Ford says it is continuing to support NHTSA's investigation. The government safety agency says its investigation has "yielded information that strongly suggests the subject defect as the cause of the reported problem," suggesting a recall may be on the horizon. 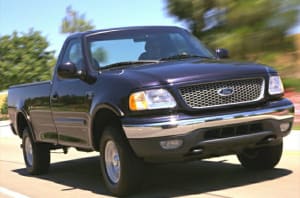