Convertibles have long been something of an acquired taste. Devotees steadfastly defend the unique sensation of elemental motoring that can only come when plugged in to one's surrounding breezes, noises and smells. Conversely, detractors have traditionally lambasted droptops for their lackluster foul weather performance, added weight, vulnerability, and creaky, ill-handling platforms. And while the naysayers may have had a point in the era of tonneau-covered British roadster pilots with their tepid heaters, dubious structural rigidity and leaky, masochistic roof mechanisms, modern topless numbers like this 2011 Mercedes-Benz E-Class Cabriolet give lie to the idea that convertibles make lousy year-round companions. Mercedes-Benz has long since memorized the four-seat convertible script. Hell, they probably wrote the damned thing. Benz has built dozens of different ones over the years, so it stands to reason that company engineers have approached their new E-Cabrio with a pretty reliable checklist of attributes. Primary among their concerns? A luxurious and well-sheltered interior. To that end, not only has Stuttgart mated an inch-thick canvas top with startlingly good sealing capabilities to a suitably robust chassis, it has kitted out its latest baby with all manner of draft-dodging technologies, including a new feature called Aircap. The system consists of a motorized airfoil that deploys from the windshield header in tandem with a power-actuated rear wind blocker that rises with the rear headrests to reduce in-cabin air turbulence. We've seen riffs on both elements before, but never with one-touch simultaneous deployment.

In addition to Aircap technology, the E-Cab offers a much-improved version of its Airscarf in-seat neck vents, seat warmers and a trick HVAC system that automatically compensates for whatever position the top is in. Benz marketing types at the car's launch on the Spanish island of Majorca promised us that their new convertible is a four-seasons vehicle for four passengers, and after a couple of days in the saddle, we are ready to concede their point.

Firstly, in an age where many luxury marques are forsaking the cloth in favor of Rube Goldbergian retractable hardtops, we applaud Mercedes for not fully succumbing to the trend it actually kickstarted with the SL roadster back in 1990. Not only does E-Cab's 'acoustic' softtop seal out the weather and din of the outside world just fine, it looks much better while doing it. Four-place tin roofs like those on the Lexus ISC and BMW 3 Series tend to have awkwardly prominent panel seams and the spatial requirements of filing away their tops often has a nasty effect on body proportions (to say nothing of trunk space). The Benz suffers no such injustices, and it looks quite striking regardless of whether or not it's wearing a cap.

Admittedly, some of us on staff still haven't warmed to the new E's rectilinear headlamps and H-E-double-hockey-stick LED running lamps, but the car's profile remains decidedly rakish, with ample visual thrust provided by the swollen rear fenders and angled character line. The rear taillamps are perhaps a bit generic in form, but the trunklid 'point' is a nice extension of the character line on the hood and the dual rear exhaust tips are well integrated into a blacked-out recess that curbs visual bulk.

Whether the top is up or down, the interior is a fine place to be. Truth be told, we didn't notice a great deal of improvement when the rather gawky looking Aircap winglet was deployed during open air motoring. Don't worry, you can't see it from the inside, but even so, there's not a drafty perch in the well-furnished house. Better still, gone are the days when a studied eye could find evidence of Benz beancounter cost-cutting in the cabin, and even the base model gets the aforementioned Aircap, along with dual-zone HVAC controls, leather and walnut trim.

At our first opportunity, we absconded with a top-rung V8-powered E500 Cabriolet (to be badged E550 when it comes to the States in May) and went hunting for entertaining coastal winding roads – tarmac that was in abundant supply thanks to Majorca's tidy dimensions and thin off-season traffic. While we couldn't access some of the area's most celebrated roads (Xynthia, the very windstorm that nearly scuttled our man Harley's Jaguar XJ drive in Paris had caused rockslides and downed trees that made obstructed key passage points), very few of the Spanish island's surface roads we encountered ran straight for longer than the length of an olive grove, and some of the more mountainous stretches we traversed had the sort of blind zig-zags that have locals honking their horns to announce their presence before rounding a bend.

Other than on a few lengths of motorway, we never really had the chance to sample the ample reserves of our E-Cab's 5.5-liter V8, but it was pleasing to have that much power and torque (382 horses at 6,000 rpm and 391 pound-feet from 2,800-4,000 rpm) at our disposal all the same. Further, the seven-speed automatic didn't hunt around as some gearboxes with as many cogs are wont to do in hilly country – the computers simply picked the right gear and stuck with it, rendering our sport pack-equipped car's pull-tab paddleshifters all but unused.

In addition to copious amounts of added support (reinforced A-pillars, "plug-in" B-pillars, floor buttresses, etc.), our German friends have sought to allay safety concerns with pop-up rollbars, seven airbags (including Benz's first headbags in a cabriolet), seatbelt pretensioners, as well as available preventative measures including 'Attention Assist' drowsiness detection, Distronic Plus active cruise control, and so on. As with the coupe, the chassis and its attachments are an artful hodgepodge of C-Class and E-Class bits, and impressively, company officials tell us that the resulting structure is as safe in a rollover as its tin-top counterpart.

Given that your average Majorcan meteorologist's calendar is filled with happy-faced sunshine icons for upwards of 300 days a year and there isn't much of a local trucking industry, we didn't exactly have the chance to assess the chassis' fortitude on bad roads, but we have every reason to be encouraged. Still, in the interest of further verifying Benz's 'four-seasons' claim, we're curious to see how the car's rear-drive power delivery and various electronic nannies (traction control, stability control, electronic brakeforce distribution, etc.) will cope with icy surfaces after swapping the 18-inch Pirelli P-Zero footwear for a set of snows. Perhaps we'll get the chance to find out next winter. In the meantime, Mercedes officials tell us that there are no plans to market a 4Matic all-wheel-drive variant of the Cabrio, ceding that niche of the market to the likes of Audi.

While impressively comfortable, swift and – with V8 power – in possession of a nice top-down burble as backing vocals, the E-Cab still isn't the sort of machine that will cause the 'red mist' to grab your Inner Stig by his HANS device – it's a more relaxed affair than all that. No need to white knuckle the steering wheel, there's good weight and reasonable feel to the rack-and-pinion system, and all of the hidden extra scaffolding has done its thing to minimize cowl shake and unnecessary drama. Rather than try to do something undignified like catch that rogue in his M3, it's better to lower the top in a scant 20 seconds – at speeds up to 25 mph – and revel in the countryside, sample the audio system, or perhaps enjoy a conversation with three of your friends (the rearmost occupants ideally not being quite as leggy as your front-seat companion, just as God intended).

To be clear, it's not that the E-Cab isn't up to a good grab-by-the-scruff shagging, it's just that with its more relaxed demeanor, it doesn't encourage that sort of behavior, much less cry out for it. In fact, we suspect that buyers would do well to save a few bucks and simply go with the less costly – and weighty – V6-powered E350. We've got nothing against the V8, but we figure that the 3.5-liter's 268 horsepower and 258 pound-feet should provide more than enough starch in this car's trousers. By lopping off a couple of cylinders, North American customers will lose some AMG body tweaks (the front fascia goes from a 'frown' to a 'smile,' etc.) as well as the cross-drilled rotors shrouded by 18-inch alloys, paddleshifters and the obligatory 'sport' button that firms up the suspension and tweaks the gearbox and throttle responses, but we're sure you can tough it out – especially at an estimated cost savings of around $8,000–$9,000. About that – Mercedes hasn't officially announced pricing yet, but we've been advised to expect something in the neighborhood of $58k for the E350 and $67k for the E550.

If you're concerned about such things (or at least the appearance of such things), official EPA fuel economy figures haven't been released yet. For comparison's sake, the 2010 V6 coupe is rated at 17 miles per gallon in the city and 26 highway, and the V8 checks in at 15/23. Both droptops are heavier by a couple of hundred pounds due to their additional bracing, so we'd bet on around a single MPG drop in each cycle.

One more thing: A 290-horsepower direct-injected version of the 3.5-liter is expected next summer, something that ought to further dent the V8's attractiveness. For the moment, though, Mercedes says to expect 0-60 mph in 5.1 seconds for the E550, with the E350 taking an additional 1.2 seconds to achieve the same milestone. Both cars are limited to a toupée-compromising 130 mph.

Still searching for something a bit more hardcore from the House of the Three–Pointed Star? We'd suggest binning the rear seats and going with an SLK55 AMG, or perhaps waiting until the execs in Stuttgart slip a few E Cabrios onto a truck bound for Affalterbach. Either way, before you dismiss Benz's latest effort, understand that there's a certain type of stateliness and undeniable pleasure that's achievable only when motoring around in a relaxed luxury four-place convertible. And thanks to advances in technology found in cars like the E-Cabrio, that ineffable joy promises to be had in any season and without penalty. 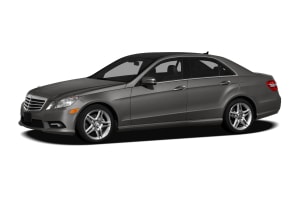