Toyota's Recall Highlights A Problem That Could Have Been Fixed

Recently, Toyota Motor America recalled over 4 million of its Toyota brand and Lexus brand vehicles to stem a problem that's hung over the automaker's head for months.

Back in August, a family of four crashed in a Lexus ES350 after the driver noticed he couldn't get the car to slow down. With a floor mat stuck underneath the accelerator pedal, the car traveled out of control, through busy intersections under its own uncontrollable power.

Traveling at a rate of over 100 MPH, the car finally came to a stop after it bounded through an intersection at a dead-end road, swiped another car, crashed through a fence, jumped over a dirt berm and landed into a riverbed below. All four people died from the injuries sustained in the crash and the ensuing fire. The driver of the other vehicle escaped with minor injuries.

Toyota's advice for owners of the above vehicles: Until the company sends you a letter asking you to come into the dealership, it is asking owners of specific Toyota and Lexus models to take out any removable driver’s floor mat and NOT replace it with any other floor mat.

The details of Toyota's safety advisory and recall are now known (view our story on the recall), with hopefully no further accidents. Toyota says the full scope of the recall, which includes the shaving of accelerator pedals and the installation of a brake override system in some models, could take a few months.

But, absent in the dry discussion of the recall are two critical things: the loss of a young family and the tragic fact that the entire thing could have been avoided.

On Their Way To Soccer Practice

Mark Saylor lived the kind of life most kids dream about. After a childhood playing sports and trading baseball cards, he grew up to join the Air Force, where he traveled the world, including a stint of two years in Okinawa, Japan. Eventually he moved to his final Air Force commission in Sacramento, achieving the rank of Sergeant E4. He was well regarded amongst his friends and fellow soldiers.

In California as a CHP, Saylor would go on to meet his wife to-be, Cleofe. Cleofe Lastrella, born in the Philippines but raised in the Midway Islands and San Francisco, was a smart and pretty young woman with a degree in biochemistry from UC Davis. In 1995, the two wed in Vallejo, California.

One year later they gave birth to their only daughter, Mahala, who took to her father's love of sports. She was an avid soccer player and loved playing with her friends. After graduating from St. John's Middle School earlier in the year, she was due to start high school in the fall.

The morning of August 28, 2009 started like any other for the Saylor family, save for the fact that it was a Friday. Officer Saylor started early like he normally did -- 5:30 a.m. -- with a brief break in the morning to take his car for service at Bob Baker Toyota/Lexus. He brought in his 2006 Lexus IS250 for a problem with the CD player and was given a loaner vehicle, a 2009 Lexus ES350. He left the dealership at 9:35 in the morning, returned to work at the California Highway Patrol Special Duties School and finished his shift at 2:00 p.m. It being Friday, he was looking forward to spending time with his family.

That afternoon Saylor returned home to the family's residence in Chula Vista, where he picked up his wife, daughter and brother-in-law (Cleofe's brother, Chris Lastrella). Officer John Concepcion, Saylor's close friend at the CHP, said the family usually spent Friday evenings at Mahala's soccer practice. They were on their way to such a practice on Friday afternoon when their Lexus experienced problems.

Chris Lastrella, riding in the back seat next to Mahala, called 911.

"The accelerator is stuck," he said to the operator. "We're approaching an intersection..."

Santee, California's intersection of SR 125 and Mission Gorge Road is one of the busiest intersections in San Diego County. The Saylors and Lastrella died only moments later.

Any tragedy of this sort leaves plenty of tough, unanswered questions. Chief among them is: why couldn't Mark Saylor get his car stopped? With the sort of rigorous training a California Highway Patrol officer goes through, there's little doubt that Saylor tried every possible option in his attempt to slow the car and save his family.

Toyota called the issue one of "pedal entrapment," brought about by the car's floor mat sticking under the pedal. The vehicle, on loan from Bob Baker Toyota/Lexus, actually had the wrong floor mat installed. It was an all-weather floor mat from a Lexus SUV, which -- given the angle of the ES350's floor and its distance to the bottom of the accelerator pedal -- caused the jamming. Saylor and his family were caught in the wrong place at the wrong time. It was a complete and utter tragedy.

Was it Toyota's fault? Was it the dealership's fault? It's tough to say, but we can be certain it wasn't Mark Saylor's fault.

When the news broke that the vehicle had the wrong floor mats in it, our hearts sank. Nobody double-checked it. Nobody from the dealership considered what might occur. But, how could they see the future, right? In a world of a thousand possibilities, it would be difficult for them to expect acceleration problems with any of their vehicles, let alone the Lexus they loaned Mark Saylor. 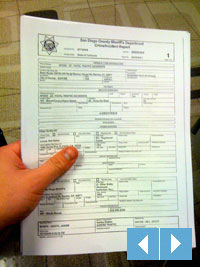 We believed that until something we learned this week.

When the San Diego County Sheriff's Department Report No. 09056454.1 became public information last week, we learned that the very same car that Mark Saylor drove on August 28 had been reported as having unintended acceleration problems.

Earlier in the week the Saylor family died, Frank Bernard and his wife picked up the very same loaner vehicle -- a white Lexus ES350 with California dealer plate 6DRT323. In a police report, Bernard told the San Diego Sheriffs that that as he was merging onto a freeway, he saw a truck nearby and accelerated briskly to get in front of it. Once in front of the truck, he let his foot off the accelerator. The vehicle "kept accelerating on its own, to about 80-85 MPH."

Bernard said he stepped on the brakes and tried to lift up on the accelerator with his right foot. He got over to the shoulder, was able to slow the car to 50-60 MPH, but was unable to stop the car's ignition (the Lexus has a push-button start system that requires a three-second hold to turn off the car). Trying everything he could, he eventually placed the car into neutral. The engine "made a very loud, whining, racing sound" but the car stopped.

Bernard noticed the floor mat had become stuck under the accelerator pedal. After he cleared the mat, he drove normally, although likely a little shaken.

When Bernard returned the vehicle to Bob Baker Toyota/Lexus on the evening of August 25, he reported the problems to the receptionist.

"I think the mat caused it," he told the receptionist upon handing her the keys. "You need to tell someone." 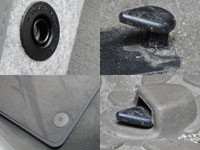 
The message never got to the right person.

Three days later, Mark Saylor picked up the same Lexus ES350 with the same all-weather floor mat installed. Hours later, he and his family were dead.

A Problem To Be Fixed

Consumer Reports recently uncovered NHTSA's log books from 2008 that showed Toyota and Lexus vehicles accounted for over 40% of the complaints about uncontrolled acceleration in 2008 models. That's a significant percentage, especially considering that Toyota doesn't sell 40% of the cars on the market (it sells about 15% of all cars).

When Toyota's President, Akio Toyoda, recently went on record to say, "Toyota has become too big and distant from its customers," we knew the tragedy had hit home at the mother company.

"We are grasping for salvation," Toyoda said.

It's the cold, hard truth of the safety business that it usually takes a tragedy to jumpstart a widespread innovation that eventually saves lives.

It's heartbreaking that Mark Saylor and his family became that tragedy, especially when it's now clear they didn't have to suffer such a fate.