Here's our best look at the next-gen M2 yet It’s been over a year since we looked at spy photos of the next-gen BMW M2, and in that time BMW has removed some of the camouflage hiding the two-door coupe’s secrets.

The big item of note with these latest spy photos is a good look at the M2’s front end. Similar to the standard 230i and M240i, the M2 appears to be getting a relatively normal-size kidney grille. It’s still big, wide and elongated versus the previous M2, but these shots leave no doubt that the vertical kidneys of the M3 and M4 won’t be translated over to the M2. Outside of the grille, it’s business as usual for an M car. A big opening in the lower bumper reveals more cooling capacity, and further inlets on the outsides of said bumper are there to let even more air pass through. BMW’s camo conceals the final shape and sculpting of the bumper from our peering eyes, but it looks aggressive and sharp-edged, just like other new BMW designs these days.

There isn’t much new to see in these shots beyond the front-end styling, but BMW does give us small glimpses of the lights in front and back. We can see that they’re the production LED units, which indicates that this prototype is pretty far along in development. If you didn’t care for the tails on the standard 2 Series, you probably won’t like these either, as they appear to share the same shape.

Lastly, we’ll point out the usual M-style quad exhaust poking out and integrated into the rear bumper design. It’s a rather menacing look from the back with the wide rubber, flared fenders and neatly-concealed aggro rear bodywork.

The latest rumors point to the new M2 being a 2023 model year release. Power is rumored to be in the 450-horse range from BMW’s 3.0-liter twin-turbo inline-six. 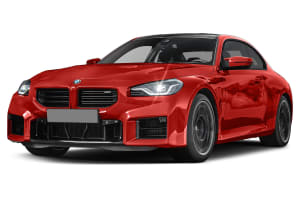