This stick-shift '94 BMW 7 Series is an absolute trip It's obviously quite common for smaller, cheaper cars to be done up in the fancier equipment and interior trappings of bigger, more expensive cars. However, you really don't expect to see the opposite. And for car enthusiasts of a certain age, who have been ogling the classic BMW E38 7 Series for decades now, we expect to find a general baseline when examining one. Generally, the differences are the exterior paint and interior color, with two choices of wheelbase (i or iL) and engine (the V8-powered 740 and James Bond's V12-powered 750). Maybe it has the sport package with its cool, big wheels and other subtle aesthetic tweaks. I know all that from memory because I'm a car enthusiast of a certain age.

And then this car comes along, for auction on Cars and Bids. It's a 1994 BMW 730i, which was not sold in the United States (this one originally comes from Spain). As those were still the days when BMW's model numbers corresponded with engine displacement, you would correctly guess that it has a 3.0-liter engine. However, if you're also guessing based on future BMW 3.0-liter engines that this one would be an inline-six, you would be wrong. It's a 3.0-liter V8, which almost seems absurd. It had 215 horsepower and 214 pound-feet of torque, which really wasn't all that different from BMW's ubiquitous 2.8-liter inline-six of that era (also available in the E38 in Europe) that produced 190 hp and 207 lb-ft. Did that extra 25 horses and 7 torques really make that much of a difference? There was also a 3.5-liter V8 good for 235 hp and 236 lb-ft (it got a torque bump to 254 in 1998). It's crazy to see both the number of engine choices and the small output gaps between them all.

Anyway, back to this car. Not only does it have the weirdo 3.0-liter V8, but it's mated to a five-speed manual transmission. And really, for those of us who love seeing manual transmissions in vehicles that rarely have them, a European flagship luxury sedan with a five-speed manual should definitely make you perk up. And although you could get a 740i with a six-speed manual in other markets, it was the five-speed automatic only in the United States. So, this really is a unicorn powertrain for our market. 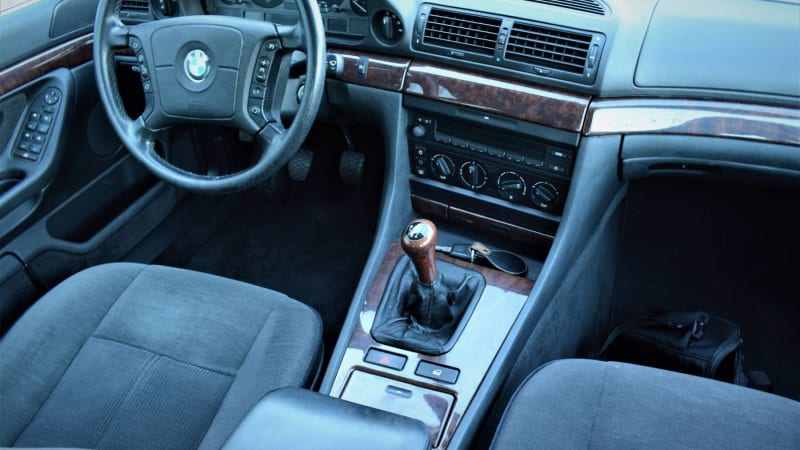 Now, let's move inside. Whoa whoa whoa, are those cloth seats in a BMW 7 Series??? Yep, Cars and Bids indicates they are covered in "flocked velour upholstery," which I've just discovered thanks to the wonders of the internet, "resembles velvet, but it costs much less." And wait, those are manual seats. Eight-way, too, with fore-aft, recline, rear seat height and front seat height, much as you'd get with a typical power seat. The most recent BMW I can recall with seat controls like this was the BMW 1 Series, and the range of adjustability they provided was surprisingly excellent.

And wait, are those manual climate controls? Yes, it was the 1990s, but the 7 Series was a flagship luxury sedan, and you expect to see auto climate controls. Most E38s you come across also have a navigation system, which was as rudimentary as you might imagine. Really, from those earliest systems all the way into the iDrive era, I'd always try to find a BMW without navigation. It's a cleaner look and you don't have that vestigial block of antiquated tech that's not only virtually useless for navigating, but significantly hampers audio control. Just get a phone holder and an aftermarket AUX input and call it a day (which is exactly what I've done for my '98 Z3). Oh, and speaking of audio, behind that wood trim panel is a tape deck. That's actually not that shocking as German cars clung to their tape decks until the turn of the century.

Honestly, I could just keep geeking out about this thing as I'm a car enthusiast of a certain age, so I'll just leave you with one final bit of fun: it's Oxford Green Metallic. And, in case you didn't know, we like our green BMWs around here.

The Cars and Bids auction runs until April 1.