Ford says it's not planning an electrified variant of the Raptor

Hybrid and electric models are off the table Ford's F-150 is available with a hybrid powertrain for the first time, and an electric drivetrain will join the range in the coming months, but electrified technology won't spread to the high-performance Raptor model. The company plans to keep electrification and desert-taming performance on opposite ends of the pickup spectrum.

Tony Greco, the F-150's program manager, confirmed that an electrified Raptor isn't in the pipeline during an interview with Muscle Car & Trucks. "We designed and engineered Raptor to be Raptor," he explained.

He stopped short of revealing why. Electrification and off-road performance aren't mutually exclusive, but it sounds like Raptor buyers are more interested in the latter than in the former, which is fine. And, his comments don't rule out a more capable variant of either the hybrid or the electric F-150 a little bit later in the production run. It's reasonable to assume some of the lessons learned during the third-generation Raptor's development process will ultimately trickle down to other versions of the truck, including hybrid and zero-emissions models.

Ford hasn't released the new Raptor's horsepower and torque numbers yet, but we're expecting that the twin-turbocharged 3.5-liter V6 will generate more of both than the last-generation model, which posted figures of 450 and 510, respectively. It's interesting to note that the PowerBoost hybrid system is rated at 430 horsepower and 570 pound-feet of torque. Giving the Raptor more grunt should widen the gap between it and its hybrid sibling.

While hybrid and electric models are off the table, the range will grow when the V8-powered Raptor R touches down in 2022. Credible rumors claim it will fend off the Ram 1500 TRX with a 5.2-liter Predator V8 shared with the Mustang Shelby GT500, where it produces 760 horsepower and 625 pound-feet of torque. 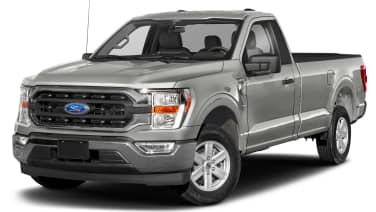 $198 - $1,350 Nat'l avg. savings off MSRP
See Local Pricing
I'm not in the market for a vehicle at this time. Please move this suggestion to the side for 30 days.
Huge Savings