It's the vehicle of choice if you need an armored SUV that looks like a soccer mom-mobile.

Though not available to retail customers, the previous-generation Chevrolet Suburban HD was the go-to vehicle for fleets that require something a bit more beefy than the run-of-the-mill Chevy full-size SUV. Think FBI or other government agencies that need power and durability while remaining incognito. They were discontinued when the last-gen Suburban ended production, but GM VP of Global Product Programs Tim Herrick recently suggested the Suburban HD could return.

According to GM Authority, while announcing delivery of the first GM Infantry Squad Vehicle to the US Army, Herrick responded to a question about the other potential military projects by saying, "I understand what it takes to make a light duty truck, a heavy duty truck, an SUV, make them all together architecturally work, and then expand that architecture, whether it’s putting batteries in, or different engines and the like.”

Herrick continued, “Expanding the architecture architecturally would be great. And with that, then you bring, maybe a heavy-duty Suburban.”

To our knowledge, this is the first mention of a Suburban HD based on the new GMT T1XX platform. The preceding Suburban HD came in two guises, 2500HD and a 3500HD, each boasting thicker frames, upgraded suspensions, and bigger brakes. Presumably, if GM goes ahead with this, the new Suburban's independent rear suspension will have to revert to a solid rear axle setup from the Silverado.

The top-spec 3500HD had a significantly increased payload capacity of 4,405 pounds and a GVWR of 11,000 pounds. It also started at $80,215. Compare that to the 1,670-pound payload capacity, 7,500-pound GVWR, and approximately $50,000 starting price tag for the regular Suburban. If you're going to armor up and bulletproof a Suburban, though, there's no better starting point. 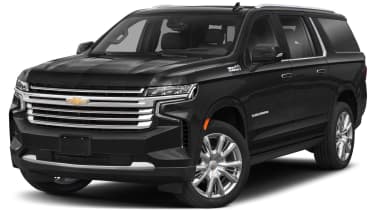 $1,429 - $2,487 Nat'l avg. savings off MSRP
See Local Pricing
I'm not in the market for a vehicle at this time. Please move this suggestion to the side for 30 days.
Huge Savings