Boxes, baskets, bike and ski racks, and even a table all mounted to your hitch 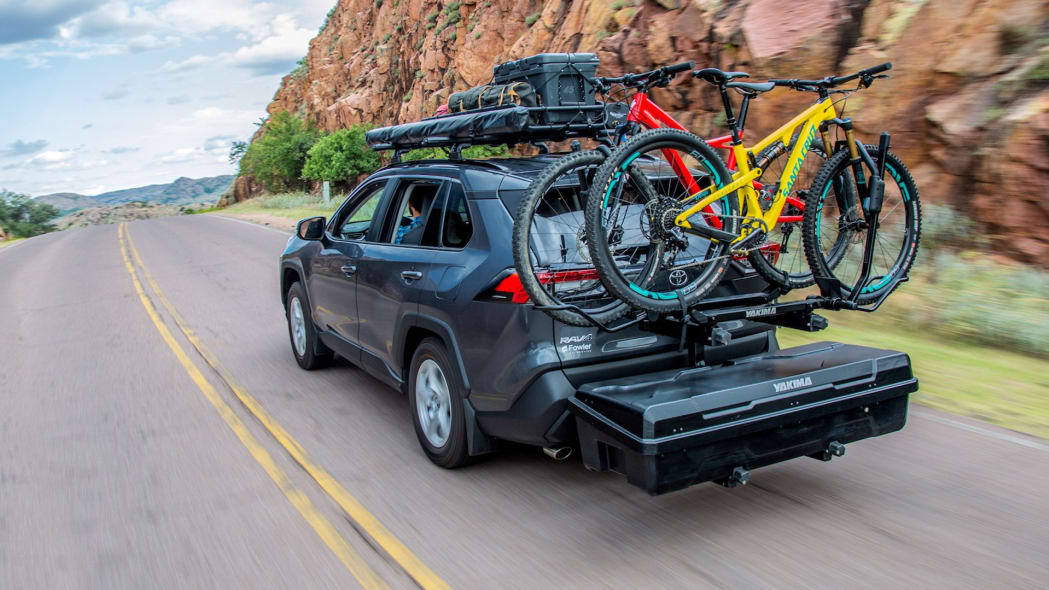 Yakima has introduced an innovative and comprehensive hitch-based cargo system that essentially combines the versatility and variety of roof-mounted cargo options with the greater capacity and easier access of mounting things to a trailer hitch. It's pretty nifty. Dubbed Exo, it is described as a "roof rack for your hitch," as it allows for a variety of boxes, racks and other solutions to be mounted to the back of your car in 20 different configurations.

It all starts with the Exo SwingBase. It's akin to a roof rack's crossbars as you need it for everything else to work. It connects to a standard 2-inch trailer hitch and performs three key duties. First, its two swing-out arms allow you to mount any of the various Exo racks and boxes to them. Second, it lets you mount an Exo TopShelf to it, which allows for the system's innovative two-tiered setup (you can stack two cargo boxes, for instance, or a bike rack over a cargo box). And third, it lets you swing everything mounted out of the way so you can still access your vehicle's cargo area..

There are multiple advantages to this concept. First, a hitch-based system can hold more weight at 300 pounds than a roof-mounted rack can, and is more easily swapped between vehicles. If it has a 2-inch hitch, Exo will work with it. Things mounted to the hitch are also much easier to access than those on the roof, especially when mounting to a tall SUV and double-especially for shorter people. There's also the matter of aerodynamics and wind noise, as relocating carriers and racks from the roof to behind the car is beneficial for both. Of course, the downside is that relatively few vehicles include a 2-inch trailer hitch, whereas almost everything but convertibles can accommodate some sort of rack. Roof carriers and baskets are typically larger as well.

As for comparisons with existing hitch-based cargo solutions, including those from Yakima, none have the double-deck capability of Exo, nor is swinging out of the way common (though adapters are available, including from Yakima).

Exo will go on sale in February of next year, including the entire of system of carriers, racks and other accessories. Most can be mounted to both the SwingBase and TopShelf, and do so without the need for special tools. They just snap onto the Exo's special cleats, which is another advantage to the system. During the live presentation to media, Yakima staff members casually popped pieces off and on, quickly securing them by turning dials that can be locked with a common key if you so choose.

Pricing for the SwingBase is $499, which is just a bit more than a Yakima rack kit of bars and towers. The TopShelf adds $379, which is about what a set of crossbars would be. Pricing for the various accessories is included below, as well as comparisons to comparable roof-mounted gear. 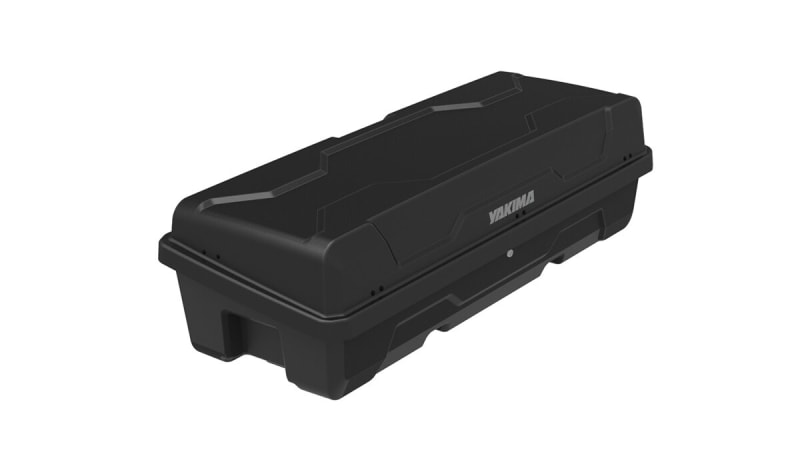 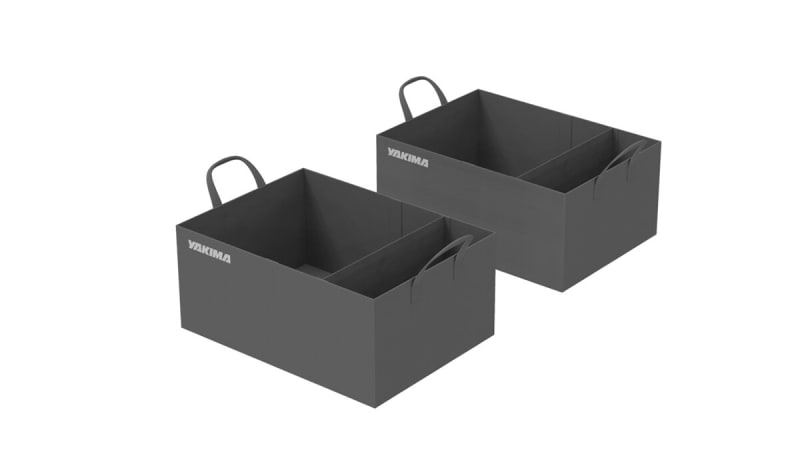 This is the first Yakima cargo box designed specifically for the back of a car. It is 10 cubic feet, which is smaller than all the company's roof-mounted cargo boxes, and notably not as wide. However, it's also a box rather than lozenge-shaped thing pinched and molded for aerodynamics. It's therefore not an apples-to-apples comparison, but given the TopShelf, you can at least add a second GearLocker for a total of 20 cubic feet. Good luck mounting two roof carriers to your roof. It costs $399, which is much less than all of Yakima's roof boxes. In fact, you could buy two for less money than a new CBX, though to be fair, the GearLocker is a much simpler thing.

Yakima has also created totes for the GearLocker to help you organize and quickly load/unload gear. They're square, fold flat and are sold in pairs for $49. Four can fit inside. 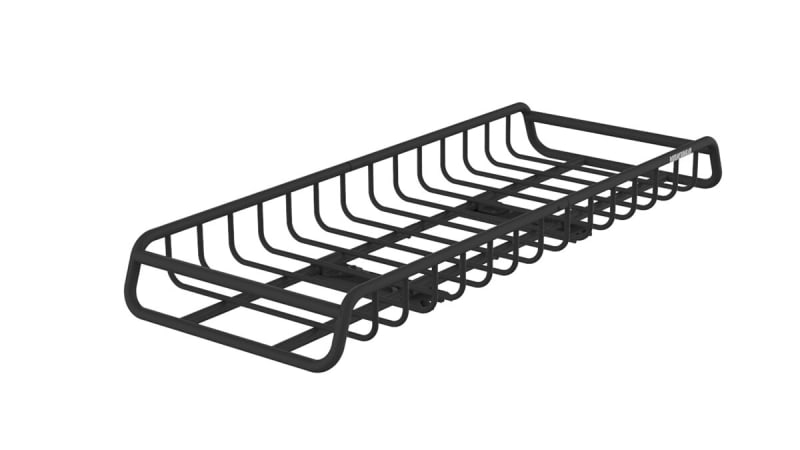 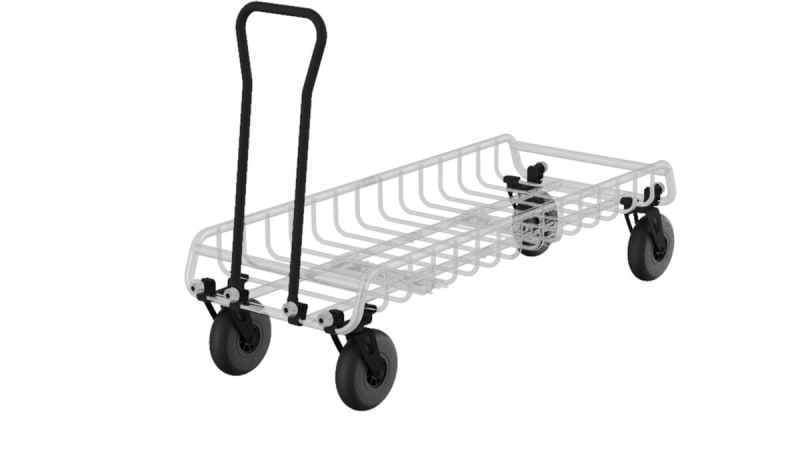 Similar to Yakima's roof baskets, but designed specifically for the Exo system's size and attachment cleats, this is pretty much exactly what it looks like: an open basket you can secure whatever you want to. It's priced at $349, which is exactly the same as the Yakima SkinnyWarrior rack.

These take the GearWarrior to another level by popping onto the GearWarrior (again, without tools) and turning it into a wagon. This goes to Exo's goal of more easily loading and unloading gear. Pricing wasn't included for these. 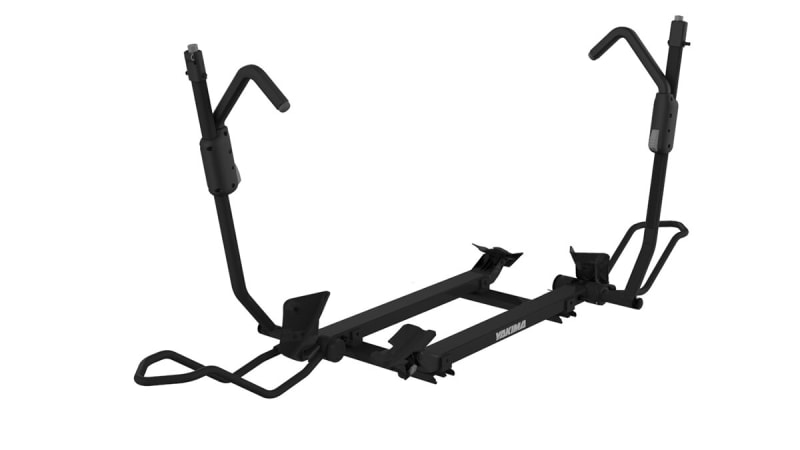 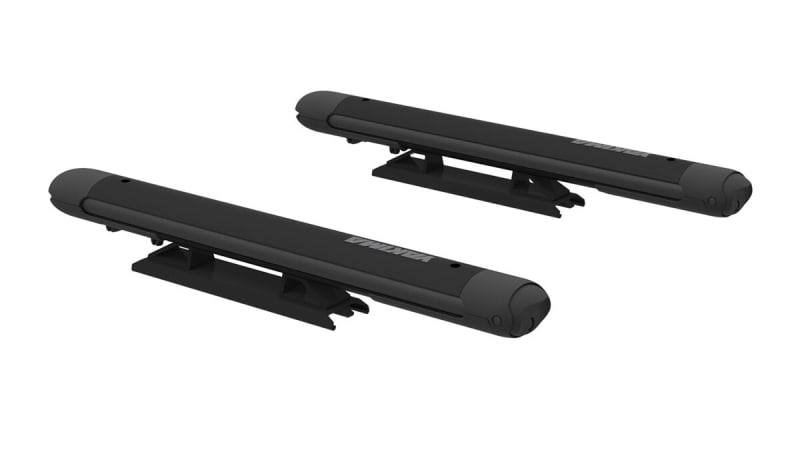 Note that the TopShelf can swivel 180 degrees, making it possible to rotate top-mounted bikes out of the way in order to access the box or basket below. The price is $479, which is more than most of Yakima's various other two-bike hitch-mounted racks (the premium HoldUp EVO and OnRamp models that hold heftier bikes carry a heftier price of $549).

These are pretty much Yakima's current ski and snowboard mounts, but fitted with feet that mount to the Exo system's cleats. They can hold five pairs of skis or four snowboards. These go for $279, which is only $30 more than the mostly identical, rack-mounted FatCat EVO 4.

This is a bamboo table that snaps onto the TopShelf, creating a workstation, campsite kitchen, or, hell, mobile bar. The TopShelf's swiveling capability is key for this. It is $129.

This addresses the problem of mounting a whole bunch of stuff to the back of your car and therefore blocking your vehicle's license plate and potentially its lighting. It includes auxiliary lights and a plate holder. It goes for $149.