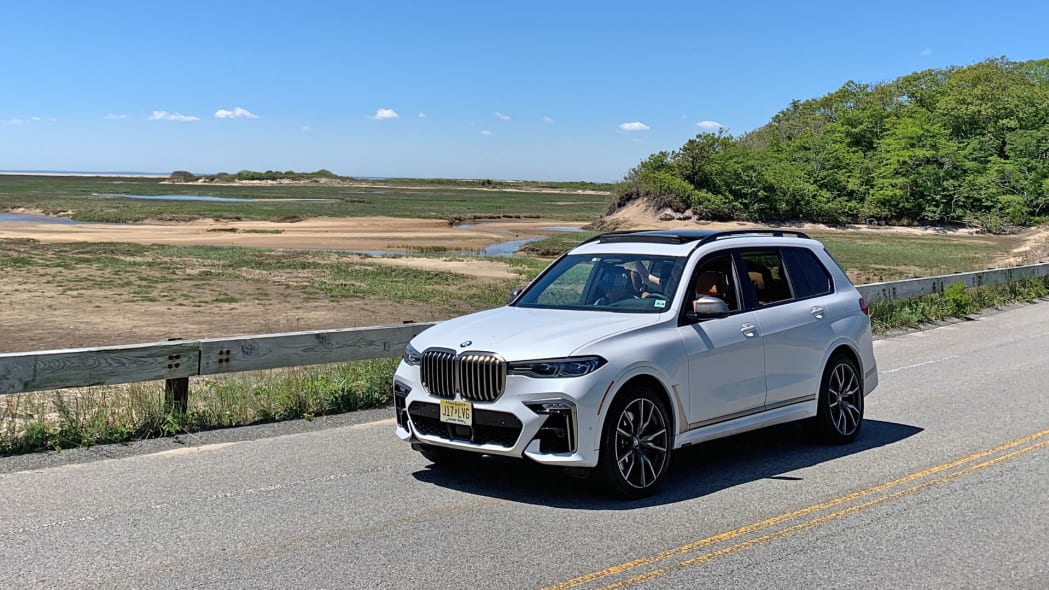 Our quarantine pod was getting antsy. My boyfriend Tal and I, our friend Colin and his boyfriend Peter, and their two rescue pit bulls, had all fled our apartments in New York City this winter in advance of the lockdown, hunkering down in our neighboring houses on a lake in Upstate New York. We’d completed our mandatory two-week self-exiles in our own homes, and had been together ever since. But after enduring the endless weeks of Mud Season – the cruel bridge between when the snow melts and when the weather gets tolerably warm – and being cooped up together cooking every meal, making every cocktail, and selecting every streaming movie in the same damn place, we needed a break. So, when summer officially started, we decided to follow the great American tradition, and take a road trip.

We were not alone. With COVID-19 disrupting travel by any public conveyance filled with other potentially contagious strangers, Americans are shifting their seasonal travel plans. According to the just-released summer travel forecast from the American Automobile Association, leisure travel by plane will be down 75% from last year, while travel by rail, bus, and cruise ship will be down by 86%. “Road trips,” according to AAA, “will make up 97% of all summer travel.”

We did some research and decided that a hotel or house rental seemed like a needless risk. “What I would look for is evidence of their disinfecting activity. Especially hard and high touch surfaces like doorknobs and faucet handles,” says Margaret Franckhauser, a public health consultant with Boston-based firm JSI. “Two things that work are disinfecting, and time between stays. But you have to make sure that they take adequate time for both. It’s not just spraying on cleanser and wiping it down. All cleansers will tell you how long a cleaning product needs to be on a surface to achieve its objective – it’s called contact time – and that can be anywhere from one minute to six minutes.”

We decided to head somewhere we could drive within a day. We also planned to stay in the Northeast where strict protocols were working to significantly lower new infections and deaths. And we wanted someplace that looked different from where we’d been. In accordance with the recommendations from the Center for Disease Control, we also hoped to stay somewhere where the potential for new infection was low, and where we would have the lowest risk of impacting the health of others.

“I would look ahead, plan out my trip, look at my traveling rules under COVID-19 for any state I’m visiting,” says Franckhauser. “States are beginning to say, maybe we should be cautious about people who are coming from places where there is high COVID activity.”

Since I’d be borrowing a car from the press fleet, and would thus need to do all of the driving, I wanted to select a destination that was fewer than seven hours away. We have a close friend whose mother has a house in Cape Cod, and needed it opened up in preparation for her to spend the summer there. So we offered to help out, in exchange for a stay. She agreed, and I procured a suitable vehicle, the $113,845 BMW X7 M50i, a three-row, seven passenger, ultra-luxury SUV. We picked our dates, packed our PPE, and set off.

“Driving your private vehicle is probably the safest way to travel, and driving it with people you live with is perfectly safe,” says Franckhauser. “Since you’re already breathing their air.”

She did not mention dogs, but they were carefully ensconced in the X7’s third row, which, given the car's 122-inch wheelbase, was definitely more than 6 feet away from me. This still provided plenty of room in the cargo area for all of our physical (and emotional) baggage.

The roadside rest areas were eerily empty. The highway was smooth and undulating. The drive was totally without incident, except if you count the near-constant proclamations of praise for the X7.

“I love this car so much,” Colin kept saying. “It’s so smooth and quiet.”

He speaks the truth. Tests of the X7 prove that it is as silent at speed as a contemporary S-Class, though it was not afraid to make some bombast (real, or piped-in) when I got on the gas. Adapative cruise control and lane-keeping assist, and a 523-horsepower twin-turbo V8, helped the hours and miles fly by, a 22-gallon gas tank prevented even the 19 mpg observed inefficiency from dragging us through too many pit stops. Though I did wonder how a six-figure luxo-barge like this could come without massaging seats.

Speaking of seats, the X7’s power-operated second row seats were the one detail that ground us down. BMW has created some complex algorithm for the movement of these thrones in concert or relation to the front seats and door openings that is intended to ease ingress and egress for all three rows of passengers, but ends up doing just the opposite. We spent many a minute – covered in sand, filled up with fried food, and wanting to get back to the house to relieve ourselves of both – standing outside the car, dumbfounded (or being crushed or reclined up front) as the seats performed an ecdysiastic routine of their own invention. Adding sand to the seat tracks did not aid in this awkward ballet. 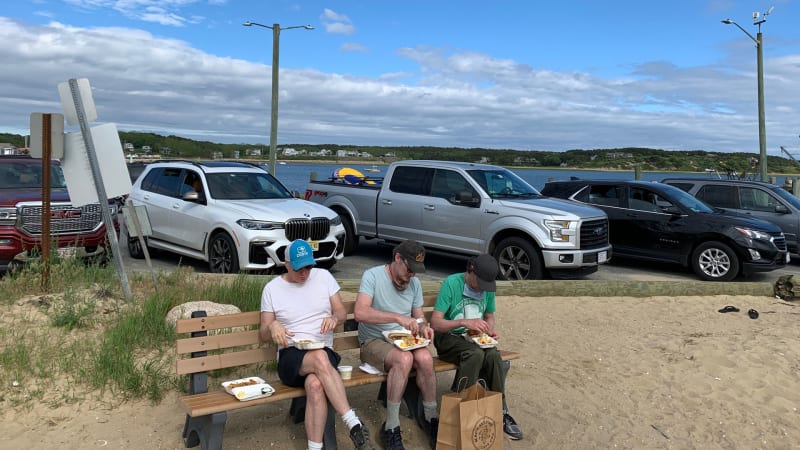 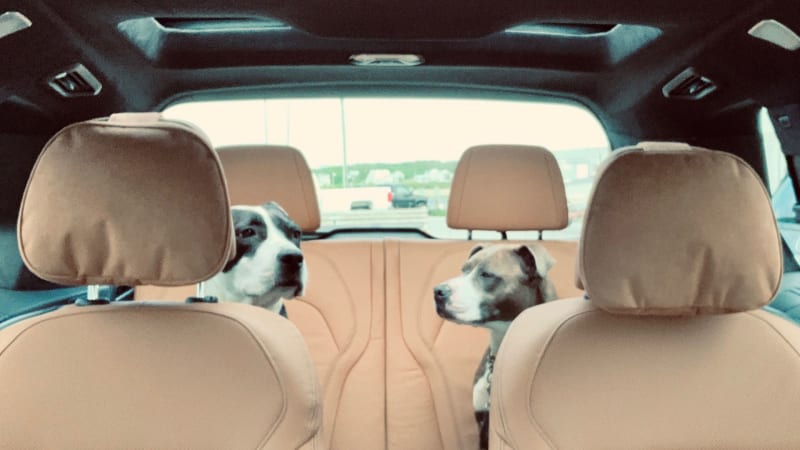 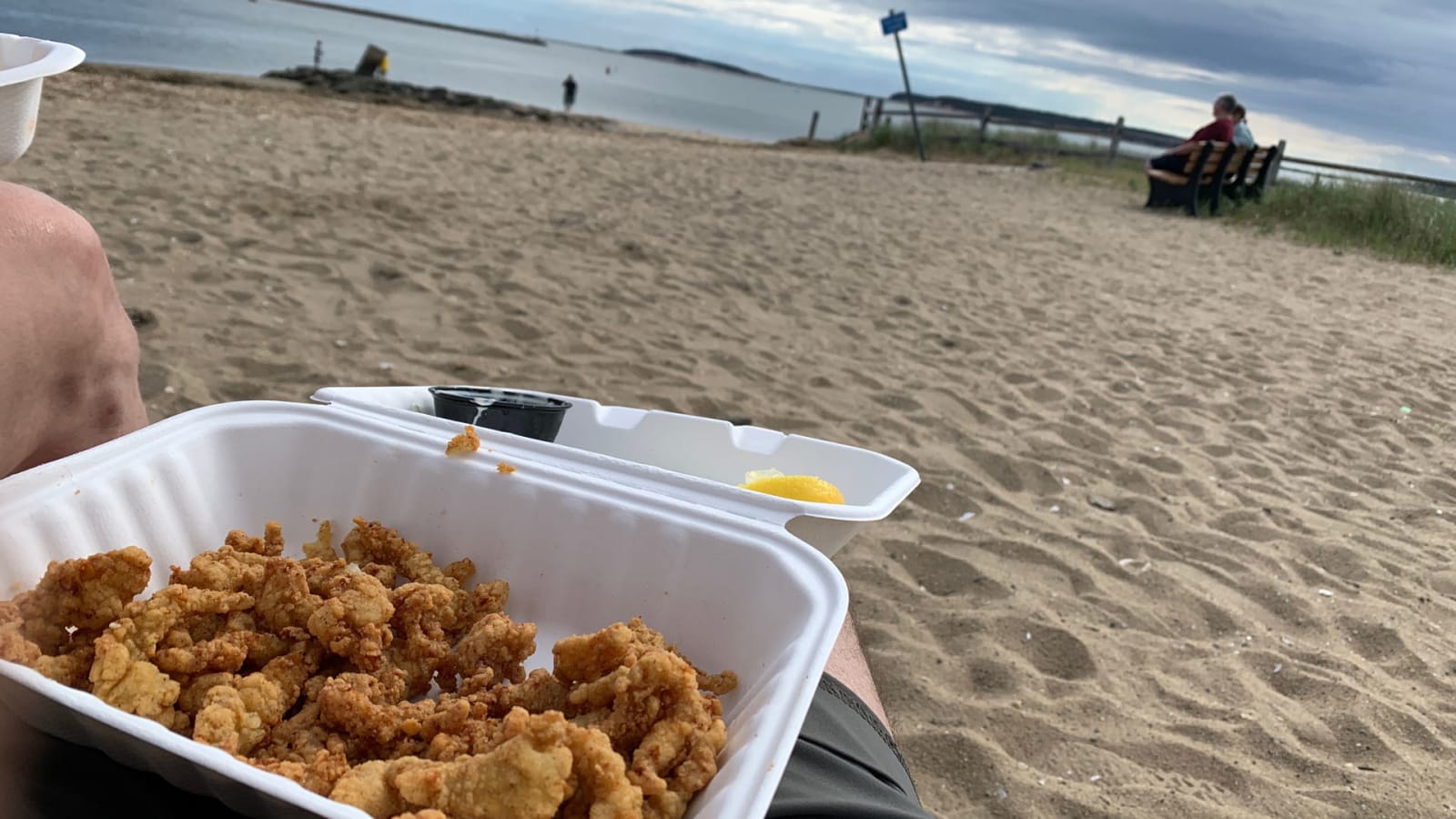 Following strict instructions from the local authorities, we did not drive our car into town, and we did wear masks when we ventured onto its atypically empty streets. We ate all of our meals in the house, save a few takeout binges we ate in or near the car. (The X7’s broad front center console makes an excellent fried-food-serving buffet.) We drove to the beach. We went for long walks through sand dunes and stunted pine forests. Despite signs warning of great white sharks, and gonad-shriveling surface temperatures, we swam in the Atlantic. We drank a liter of gin, two liters of tequila, and two liters of vodka, smoked innumerable cigarettes, and consumed all of the legal weed we purchased locally. None while driving, obviously.

At no time did we separate from each other, except to sleep, and at no point were we closer than 6 feet from an unmasked stranger. The X7 cosseted us, and never hiccuped. During an evening thunderstorm, we spied a rainbow through its panoramic sunroof. The next night, the magic LED-impregnated glass roof made its own light display.

We have traveled many places with Colin and Peter, and making new friends has never been high on our list of goals when vacationing together. Less so now in this era of social distancing. But that was fine.

“One of the great things about this trip,” Colin joked as we pulled down the driveway to leave the Cape, “was getting to catch up with you guys.” Our pod remains united. We miss our X7.