Want a wagon? This clean 2004 Volvo V70R is calling your name

It has a blue interior, spaceball manual shifter and even the rear-facing third row!

The guy that lived below me in my college apartment owned a Volvo V70R. I’d walk by it every time I left, admiring the perfect black paint and sporty five-spoke wheels. It was an unspoken rule that we’d park next to each other behind our house every time. After all, neither of us would door ding the other’s precious ride. We talked about cars semi-regularly on our crooked porch; his father was a Volvo enthusiast who owned a driveway full of high-performance Volvos from the 1990s and 2000s. Obviously, the lingonberry didn’t fall far from the tree. The promised rides in our respective cars never did happen, but I sure do wish they did.

A V70R, like the 2004 model for sale on Bring a Trailer here, is a splendid sport wagon that’s full of fun surprises. For starters, it has a 2.5-liter turbocharged five-cylinder under the hood that’s good for 300 horsepower and 295 pound-feet of torque. In this silver one’s case, that’s paired with all-wheel drive and a six-speed manual operated by the forever-cool "spaceball" shifter (a five-speed auto was available). It has upsized brakes from Brembo, and it also came standard with an adjustable suspension developed with the help of Ohlins — you change the stiffness via three different buttons on the dash. Sure, there's the potential for it to be an electronic nightmare waiting to break, but it’s also extremely cool for a car from 2004.

The performance is certainly better than a standard V70, but it’s no racecar. The 0-60 mph time is just under 6 seconds, and you’ll look good on the way there. Those subtle styling changes for the R really make all the difference in this Swedish wagon. More aggressive bumpers, a spoiler, big wheels and “R” logos all lend it a spicier look. Then on the inside, this particular example has blue leather and blue carpeting to match the blue instrument cluster backing. We approve.

This car won’t be selling for stupid money, either. There’s still three days on the clock, and it’s well under $10,000. At 99,000 miles on the odometer, this one still has plenty of life left in it, too. Perhaps you’re going to be in need of a baby hauler soon? It’s hard to argue with Volvo’s reputation for safety, and this one even has the rearward-facing third row that never fails to be a good time for all. 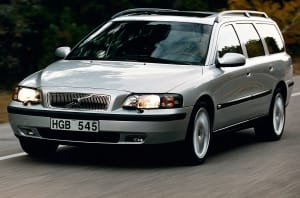