The update costs about $135 per horsepower German tuner Wheelsandmore lived up to its name by nudging the RS Q8, Audi's quickest SUV, beyond the 1,000-horsepower threshold. Called Goliath, it's so extreme that it's not street-legal in its home country.

In its most powerful configuration, Wheelsandmore's Goliath boasts an evolution of the stock twin-turbocharged, 4.0-liter V8 that develops 1,010 horsepower and 922 pound-feet of torque, though the latter figure is electronically limited to ensure the drivetrain doesn't get torn apart. Achieving these numbers required making a long list of modifications like tweaking the ECU, fitting bigger turbochargers, and installing a freer-flowing (read: really loud) exhaust system unobstructed by particulate filters and, for the most part, silencers. Only the rear mufflers remain.

The standard, 591-horsepower RS Q8 takes 3.8 seconds to reach 60 mph from a stop, and it's the fastest SUV around the Nürburgring track in Germany. Adding 419 horses to the equation undoubtedly makes it quicker, but Wheelsandmore hasn't published acceleration figures. It did note that, due in part to the exhaust upgrades, the Goliath isn't street-legal in the European Union because it doesn't comply with emissions regulations. It's best suited to living life a quarter-mile at a time on the drag strip, or to countries with looser standards.

Wheelsandmore also offers a smartphone-controlled air suspension said to be extremely easy to install, and, as you'd expect, new-look wheels. It had to purchase a special machine to manufacture 24-inch alloys. They're available in several colors, and they're wrapped by the kind of tires normally found under a supercar.

Four additional tuning packages are available if 1,010 horsepower is too much, or if you need to keep your RS Q8 street-legal. They range from a relatively simple software optimization that bumps the eight-cylinder's output to 710 horsepower to a 965-horsepower bundle that won't draw the ire of regulators in Europe. Pricing starts at €2,500, which represents approximately $2,800, but ticking all of the boxes will set buyers back by €49,900, or about $56,400 at the current conversion rate. Put another way, that's $135 per additional horsepower. 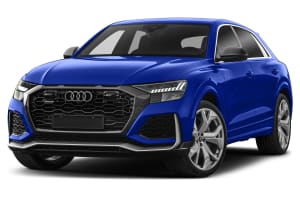