It really is that good

The 2019 Subaru STI S209 is peak Subaru for America. It’s the most powerful and most expensive vehicle with the Subaru badge on it, and there will only ever be 209 of them sold. It’s put together in STI’s small shop in Kiryu, Japan, where workers build approximately 2-3 cars per day.

Subaru’s long-used 2.5-liter EJ25 turbocharged flat-four is back for another round, but it’s been modified to make more power than a regular WRX STI. The redesigned intake, larger HKS turbocharger and better-flowing exhaust system ramp output up to 341 horsepower and 330 pound-feet of torque, gains of 31 and 40 respectively over a regular STI. It can hit 60 mph in 4.9 seconds and tops out at 162 mph. A huge number of changes were made to the suspension, steering, aero and brakes to make the S209 drive better and produce quicker lap times on track.

You can read a full deep dive into all of the intricate changes in our First Drive story here. A couple of Autoblog staffers, News Editor Joel Stocksdale and Senior Producer Chris McGraw, happened to spend some time in S209s in their respective portions of the country. Check out their thoughts in the discussion below.

Joel Stocksdale: When the S209 showed up, I was excited to drive such a special car, but I was also unsure I would like it. It's massively expensive, and I already had mixed feelings about STIs to begin with. They have an ornery, old-school nature that has frustrated me before, especially the slow-spooling engines. But man, I'm in love with this thing.

CM: That's interesting to hear. For those who don't know, you and I rarely see eye to eye when it comes to cars, so I was eager to hear your thoughts on the S209. I drove this back in early November, and it had been awhile since I had driven an STI in general. The frustrating, ornery, old school nature is something I love about the STI, and I adored driving it from the start, especially in the mountains. Though I wish it had been on winter tires for the cold weather at the time.

JS: That's totally understandable. The summer tires on this thing are not happy with snow and cold. But thankfully it's been dry and warm enough here that they're still good. And that's one of the things I love about this car. Between the tires and the all-wheel drive, it has astounding grip. Turn the wheel, put the hammer down, and let it claw you around corners. It's got so much grip that I'm a little nervous taking it through highway ramps with a lot of speed. I know it has the grip, but I also worry that I might not feel the limit until it's too late. Probably best to leave the really fast cornering to the track. 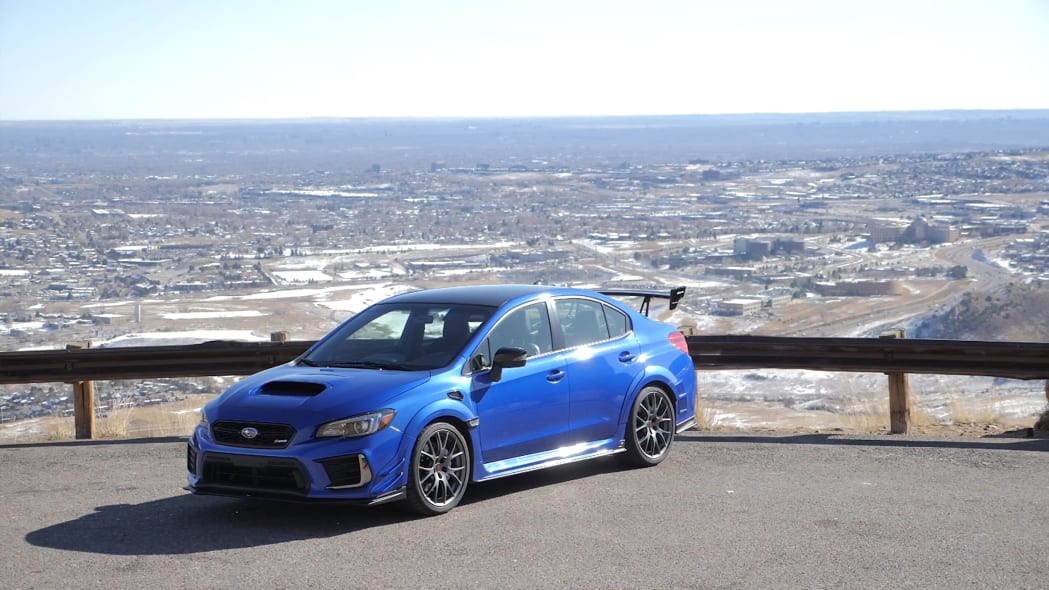 CM: I definitely tested the grip on some of the canyon roads, but not to the absolute limit. I also really enjoyed the steering, as it felt super tight and precise. There's a mountain near my house called Lookout Mountain, which has back-to-back switchbacks for a few thousand feet of elevation gain, and the S209 loved that drive.

JS: The steering is spectacular. It's been a long time since I've driven a car with so much road feel. Cliché as it might be, you really can feel all the little imperfections of the road through the wheel. It's got good weight to it, too. Not too heavy, but enough heft that you feel involved. And I think broadly speaking, it's the involvement of this car that really has me excited. The stiff suspension responds immediately. The steering is super communicative. The shifter is a chunky short-throw-style shifter. The pedals are placed for easy rev-matched downshifts. And then there's the engine.

Like other WRX engines, it's got that dual-nature of being slow and lazy at low rpm, and it takes some revs to actually get the power. But the smooth rush as the turbo kicks in is exhilarating, and the power keeps building to redline. The engine is shockingly smooth, too. I've gotten used to Subaru engines being coarse and unrefined with revs. It was a pleasant surprise. 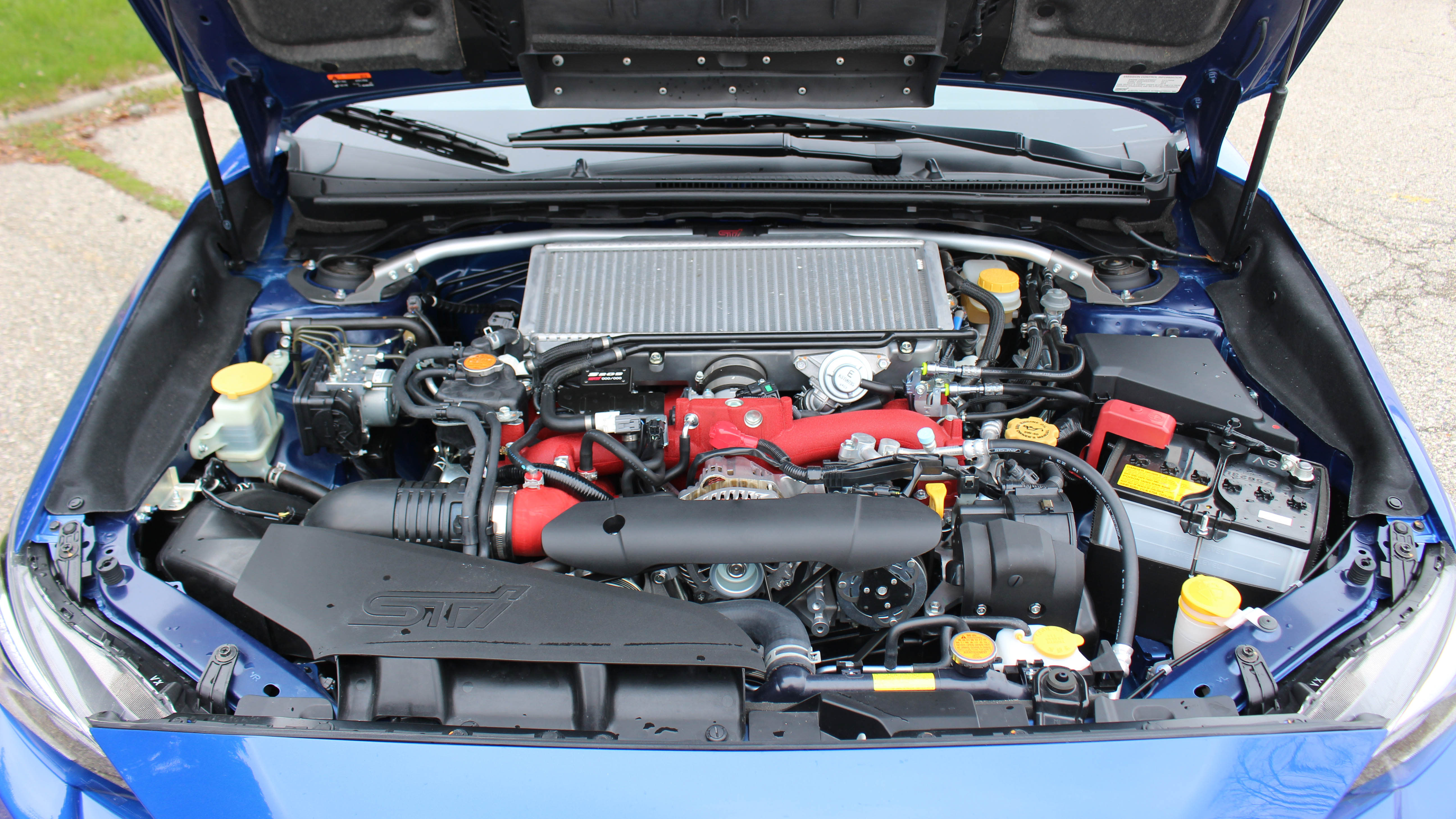 CM: It was smooth! The boost from the turbo was fantastic once it hits, but you are dead on with the slow and lazy at low rpms comment. At one point I was driving around downtown Golden, Colo., and in that setting, it felt lethargic. But get it onto some open highways, and it takes off. The one thing I was a little let down by was the exhaust note. I feel like it could've been louder, and it took a little bit away from the experience.

JS: I know what you mean — it seems like it should be a lot louder. On the flip side, when I was done ripping around curvy roads, it was nice that it was quiet on the interstate home. It does have a decent sound at least. And if you want more volume, I have a family friend who recently bought one of these and has already removed the rear mufflers. Easy fix. (Want to listen to the exhaust yourself? See the video at the bottom of this page)

CM: Speaking of purchasing, that purchase price, nearly $65,000. Ouch. And I imagine very few of these actually went for sticker. 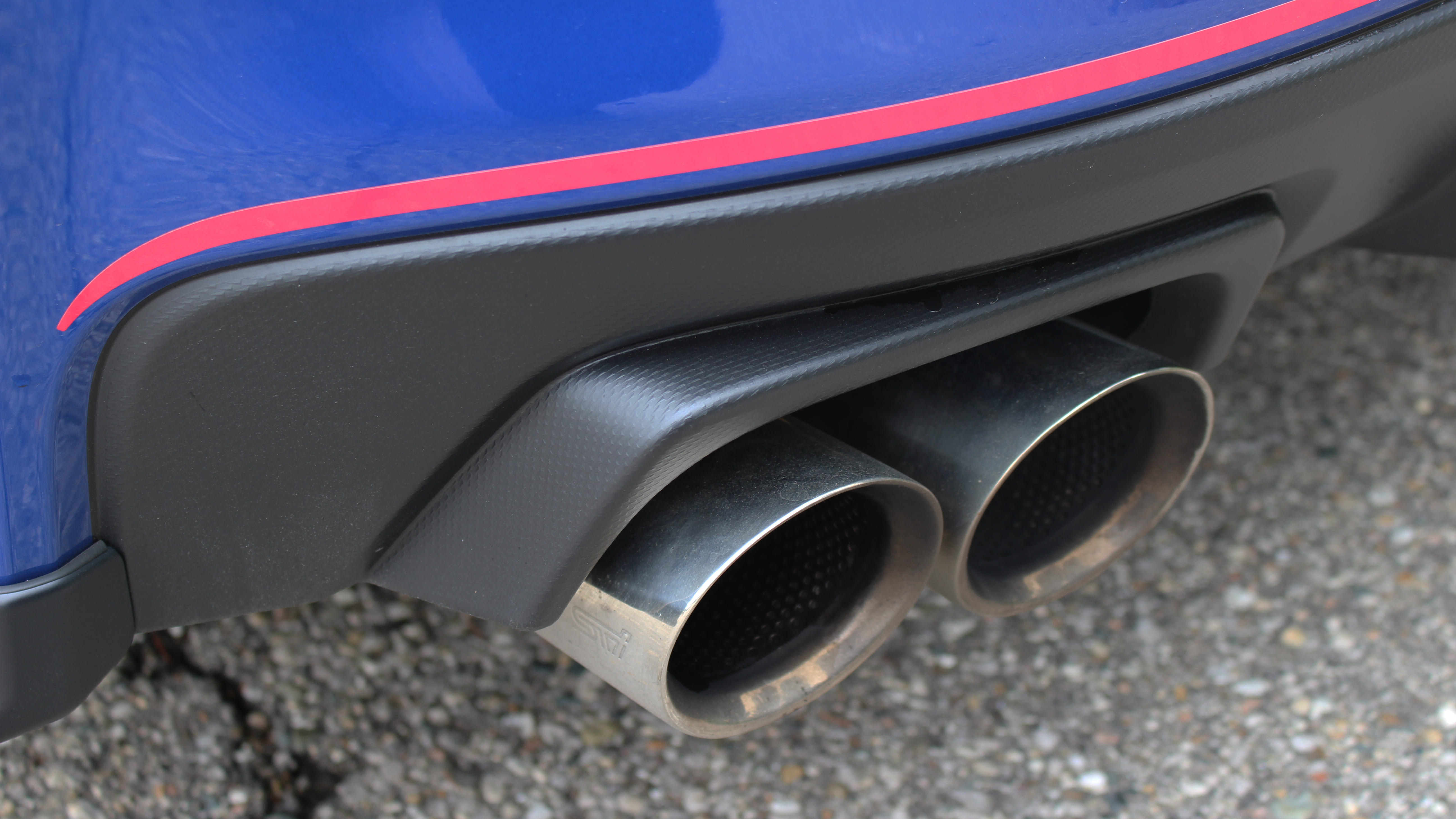 JS: I'm not sure of the actual transaction prices, but woof, it's a whole lot of money. And power per dollar, it's a poor value, considering you could have something like a Shelby GT350, Camaro ZL1 or Challenger Hellcat for similar money. But somehow, I'm OK with the price. Something about this car feels really, truly special, and it's not just the exclusivity. All the little changes come together to make a really involving, raucous car that I don't think you can really get from any other company. And the power-per-dollar ratio can work in its favor. That kind of money will only get you a well-optioned base Porsche Cayman, and that's just 300 horsepower from a turbo flat-four. You know, like the one in the Subaru.

CM: Yeah, it's not like anyone who is going out and buying this is buying it as their daily driver, and since they knew they could fetch that amount, I'm OK with it too. It's just not what I would spend my money on.

JS: There is something that we haven't touched on, though, that I think we'll disagree on: the styling

CM: I was waiting for that to come up. I, overall, like the styling, which I found surprising because it's fairly busy and I don't usually like that. I love the carbon fiber roof.

JS: Oh, well we might still be on the same page. I think the wing is a little much, but otherwise, I love it. I love all the extra dive planes, vents and such. I think part of it is that everything looks really purposeful, not necessarily because some designer thought it would look cool. And while over the top, the wing is functional, so it does play into the car's character and appearance. 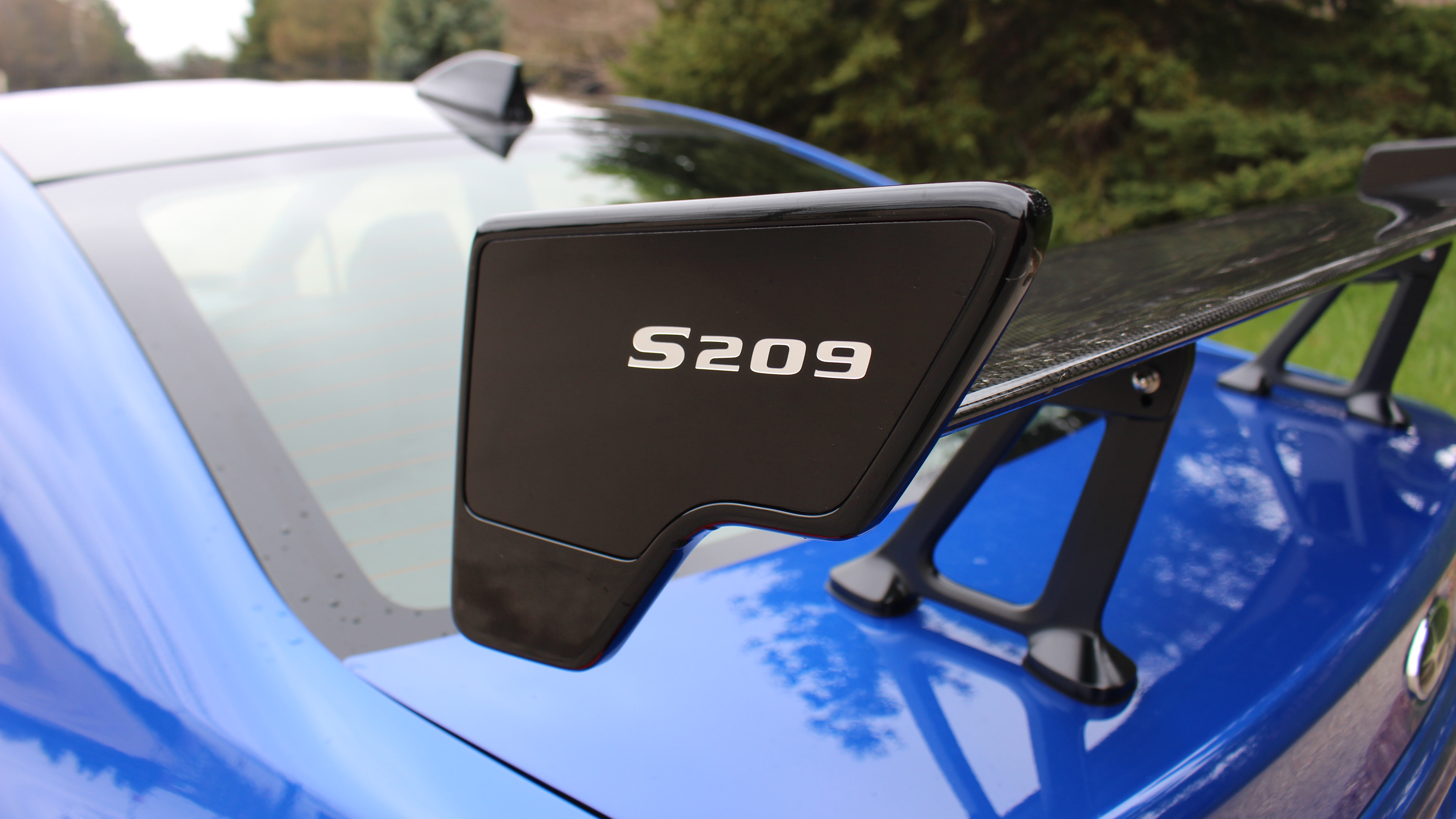 CM: Definitely on the same page with the wing. And I'm OK with the dive planes, the "vortex generators" and the vents because I know they're purposeful. Is it the best looking car in the world? Not by a long shot, but at least Subaru didn't go Civic Type-R busy with it.

Now, that of course is the exterior. The interior, I do not like. But before we get to that, which would you get, blue or white?

JS: White had me tempted, because it seems like everyone goes with World Rally Blue on their WRXs and STIs, but I'm really digging it in blue. It makes the STI pink accents pop. I don't think you can go wrong with either choice.

CM: I originally thought that as well, and if you could get the gold wheels with blue, I'd be tempted. But in this instance I think I'd go with white, probably only because I think it photographs better in the mountains.

As for the interior, it's meh. Completely unremarkable. Though I have to say I think the only interior of any Subaru I've ever truly loved was the Outback XT I drove right before this car. It's fine, I just wish they had done better. Plus, I hate that there is S209 badging on every square inch of the interior. You'll never forget what kind of STI you're in; that's for sure. 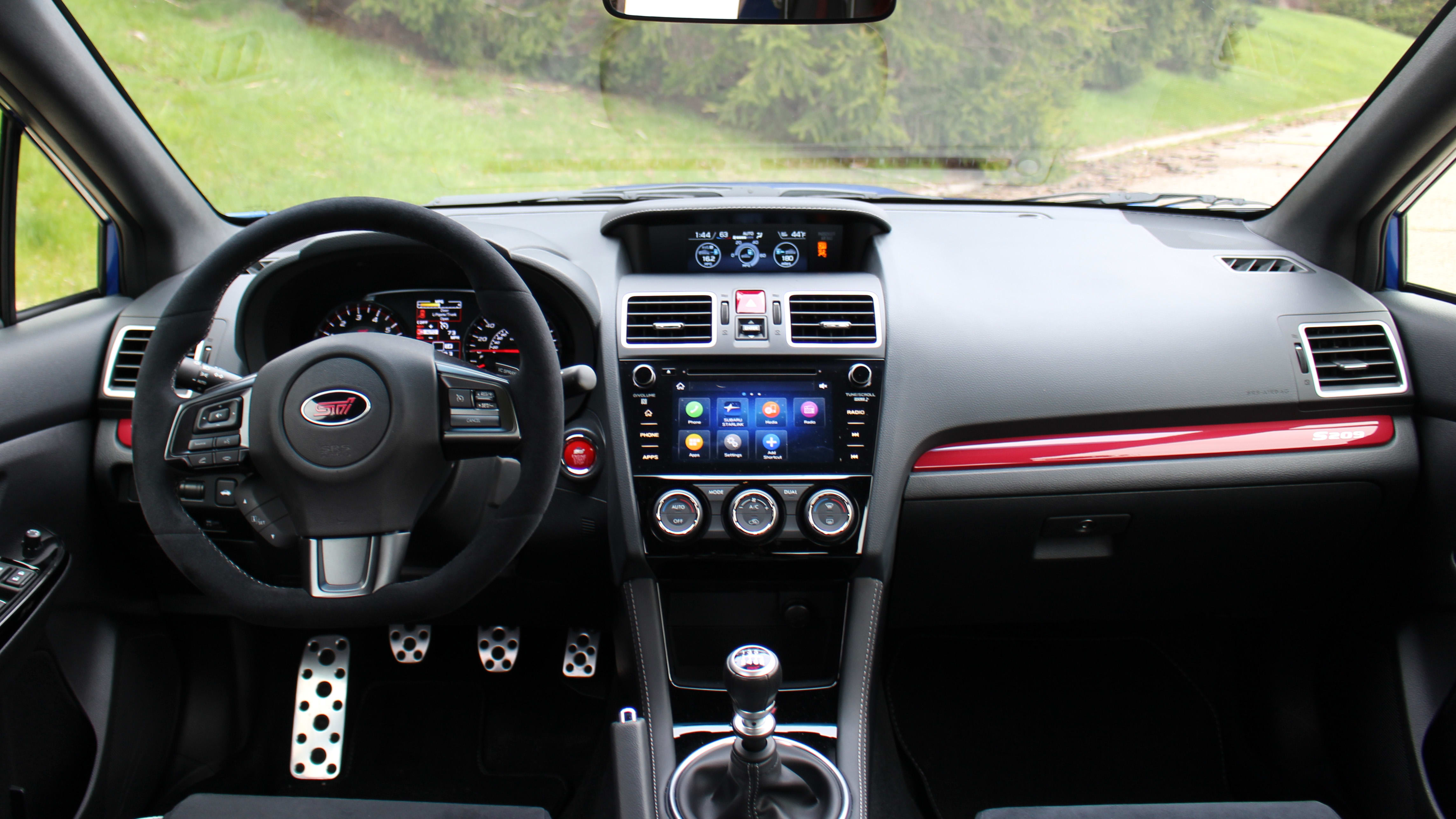 JS: I'm relatively ambivalent about the interior. It's basically the same thing we've had in every WRX and STI for the last few years, so it's plain and low-rent. But I, and probably anyone considering one of these, has made peace with that.

I'm also fine with the badging, especially because this is a really special Subaru. We've never had one of these S models, before, so seeing that reminder everywhere is fine by me. I do love the pink accents on the dash, and even the pink-ish seatbelts. I'm glad STI is proud to be pink.

CM: I'm wearing pink right now, so I agree with you there. This is scary. I don't think we've ever agreed on anything so much.

JS: It really is. I suppose that's a testament to how good this thing is, that it can have two people who are diametrically opposed on so much agree almost universally.

CM: It truly is a special car, and you feel it as soon as you get behind the wheel. 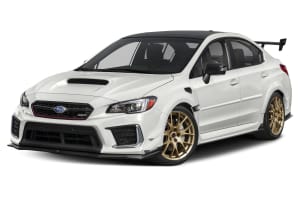