Earlier this month, Porsche Cars North America donated a 911 Speedster for an RM Sotheby's auction, all proceeds to be donated to the United Way's Community Response and Recovery Fund. Not only was the Speedster one of only 1,948 models produced for global consumption, this particular car was the last-ever 991-series Porsche 911 to go down the serial production line at Porsche's Zuffenhausen factory. Fitted with options like the $24,510 Heritage Design Package, a fire extinguisher, Porsche Dynamic Light System, front axle lift kit, extended-range fuel tank, and climate control, MSRP stood at $311,940. Additional prizes thrown in included a Porsche Design watch engraved with a portion of the Speedster's VIN, a large-format book documenting the build — a memento last created when Porsche built the one-millionth 911 in 2017 — and an afternoon with Dr. Frank-Steffen Walliser and Andreas Preuninger at Porsche's Weissach development center. The hammer fell today on a final price of $550,000, which includes the buyer's fee to RM Sotheby's.

Assuming Monterey Car Week goes ahead, Porsche plans to hand the Speedster over at The Quail: A Motorsports Gathering, with PCNA boss Klaus Zellmer presiding. The auction included business class for two to travel to Monterey and three nights of accommodations and meals, plus business class tickets for two within Europe for the German component. Best of all, it's all for a good cause, and congratulations to the winner. 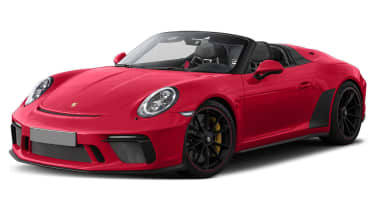