The second sentence of the Wikipedia entry for the first-generation BMW 8 Series built from 1990 to 1999 is, "While it did supplant the original E24 based 6 Series in 1990, a common misconception is that the 8 Series was developed as a successor. It was actually in an entirely new model class aimed at a different market, with a substantially higher price and performance than the 6 Series." As successful as that 8 Series was as a poster car, we know that model-line dogleg didn't fulfill its potential at the dealership. With BMW turning the same trick 20 years later to re-open the 8 Series book, a story in Automotive News reveals dealers find the situation not enjoying the ideal start. Some dealers told the outlet that 8 Series inventory nationwide exceeds every other BMW model. Worse yet, of the 2,000 8 Series models already at dealers or on their way as of earlier this month, almost a third of them were classified Priority 5, which happens when dealers don't want the challenge of selling a car and want another retailer to take it.

The flagship comes in as many as 15 variants, between coupe, convertible, and four-door bodystyles, three engines, and rear-wheel or all-wheel drive, similar to the 4 Series that offers 14 configurations. Such abundant options for the 8 Series could have led dealers to order more cars than the pool of buyers could absorb when, unlike with the 4 Series, the car is a brand new offering without a clear and established clientele. And with each 8 Series on the lot costing a dealer as much as $500 per month in interest, it's no wonder dealers are looking for anyone to get the cars out of the store.

The retailers quoted in the piece say BMW hasn't marketed the car sufficiently nor properly. The automaker has put more of its ad spend into the new X7, which is reasonable for a product in a hot segment that sold 21,574 units last year in the U.S. in 10 months, compared to 8 Series sales of 4,410 units over the whole year. Those 8 Series numbers likely outdid the Mercedes S-Class Coupe competition, though — another car that doesn't move the marketing needle. Mercedes doesn't break out numbers for the two-door, but the S-Class overall sold 12,528 examples in the U.S. last year, and it's impossible a third of them were two-doors.

BMW apparently had a marketing campaign planned for the 8 Series to begin in April, but the novel coronavirus has waylaid those plans along with so many others. One dealer told AN, "So far, what I've seen is an email blast to all my 6 Series customers, and they are not going to buy this car." The result, in another dealer's words, is that the 8 Series is "the best car that no one knows about."

It's far too early to tell how much of the old 8 Series history will repeat, yet with the recent market launch of the Gran Coupe, the new 8 Series model has barely finished its first chapter. Once the world concludes this interlude known as the coronavirus pandemic, we'll see what the new range can do. For dealers, that clarity can't come soon enough. 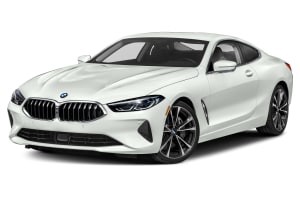