You've seen the pictures and read the specs. Finally, here's what it's like behind the wheel.

EASTNOR, England – Before setting out in this all-new 2020 Land Rover Defender, please allow me a few words about its legendary predecessor. After a terrible winter, the British summer of 1947 was one of the warmest on record. It was probably shirt-sleeve order, then, when Maurice and Spencer Wilks walked down the tree-lined track from their summer cottage at Wern-y-Wylan and onto the expansive sands of Red Wharf Bay in Anglesey. Were there dogs frolicking alongside the two brothers? History doesn't recall. Nor does it tell us much about their stick-in-the-sand sketch, which was soon engulfed by the incoming tide, but it was that drawing, illustrating the ideas of Maurice, Rover's technical director, and Spencer, Rover's managing director, which went on to play a crucial part in the development of the quintessential British utility, the Land Rover.

What I can tell you is that the vehicle standing in front of me now, while looking indubitably modern, is also somehow reminiscent of the earliest Land Rover launched at the Amsterdam Motor Show in 1948 and everything that has followed since. My heart says Defender, a name this go-anywhere vehicle gained in 1990, just seven years before it was withdrawn from sale in the United States. My head says Range Rover, the SUV on which this clever new car is based, but beefed up like a prizefighter. This is car design akin to a Quentin Tarantino movie; a piece of filmmaking in its own right, but chock full of sly allusions and tributes.

Yet while its predecessor was a simple body-on-frame, mend-it-with-a-hammer utility, this is a modern, independently sprung, aluminum monocoque vehicle, with modern engines, infotainment and connectivity choices. And it's coming back to America. Could it possibly be as capable (and uncomfortable) as the old Defender? I've got the key in my hand … 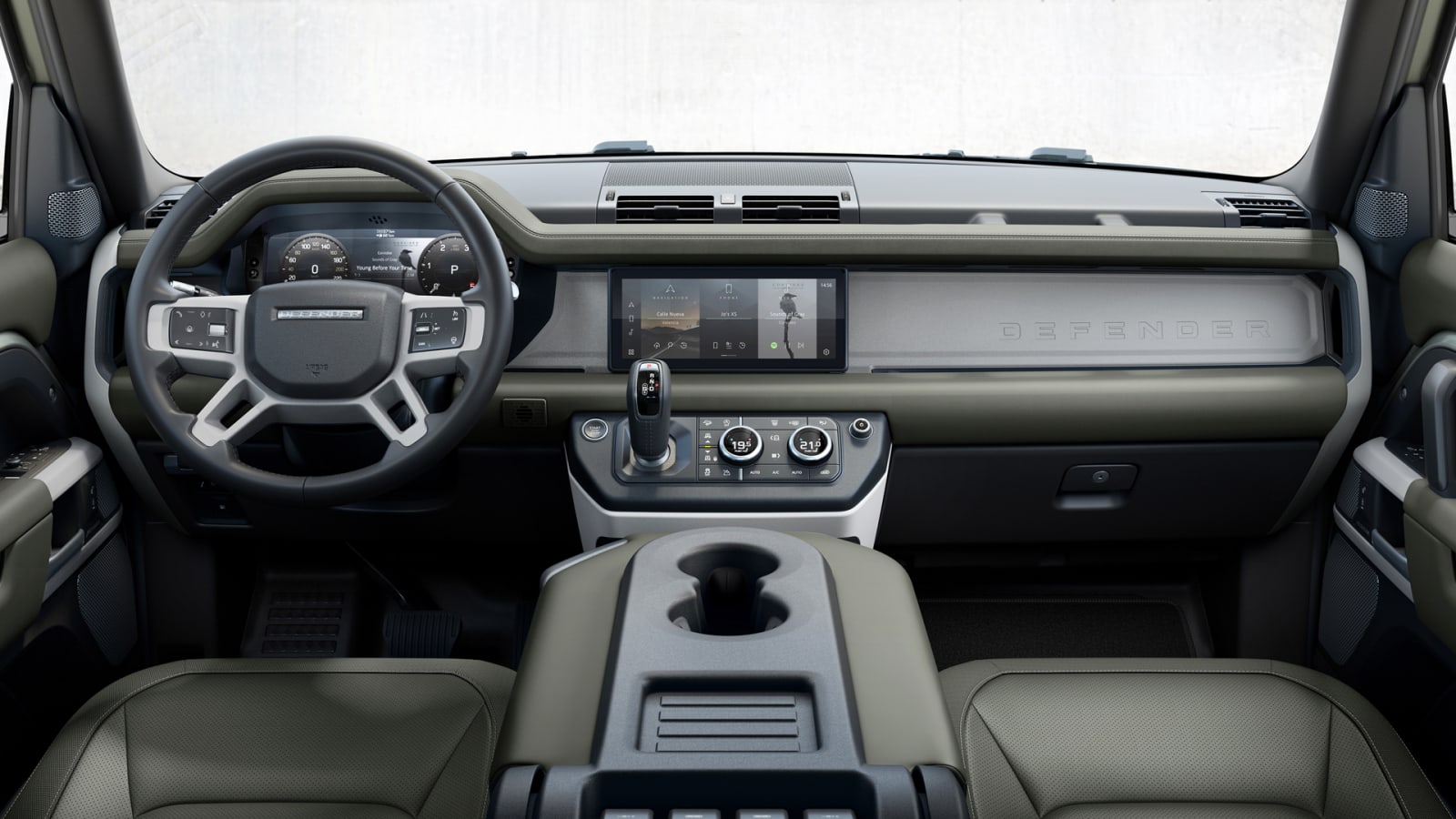 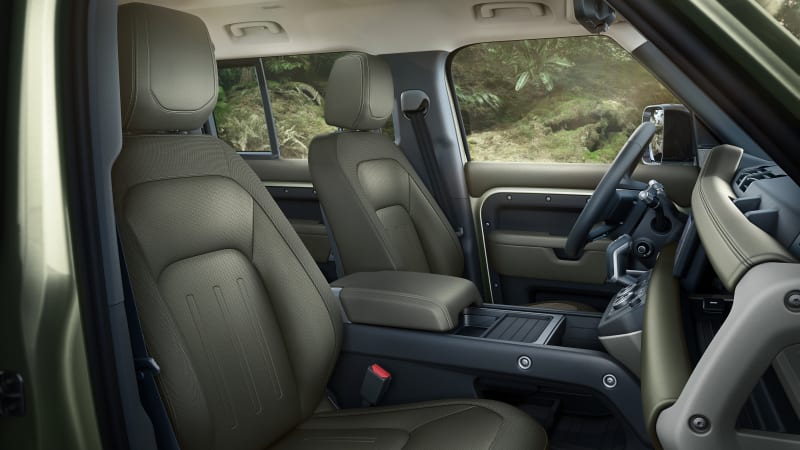 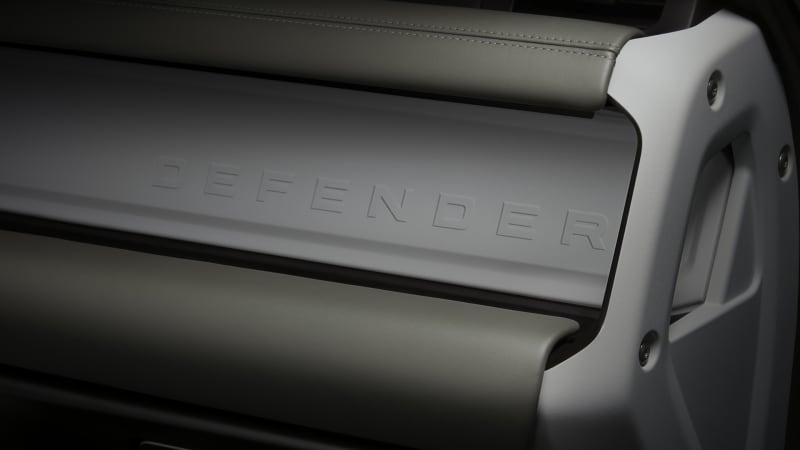 I climb in and take a deep breath of reverence combined with admiration. The Defender interior is quasi-military heaven, from the standard rubber matting (the carpet goes on top) and squashy foam padding in green (naturally), to the optional three-abreast front seating and the half-width dashboard tray just like the originals. It's all unmistakably Defender, but congenially modern and plush.

There's bare metal, tough grained plastic and that woven nylon material filched from swanky backpacks – alternative trim materials are available. The driver's all-digital instrument binnacle sits on the powder-coated magnesium-alloy, full-width beam, and the windshield is shallow with huge wipers and integral washers that actually work. For one familiar with an old Defender, the driving position is unrecognisably comfy; or as one fellow writer put it, "just not crap enough."

Combined with all this, is a center touchscreen, various cameras and safety systems. Apple CarPlay and Android Auto are standard, there's a "ClearSight" camera-based rearview mirror option as well as front-wheel cameras and a trick "transparent" hood display (below left) that help guide the wheels on difficult surfaces. Issues? There could have been a bit more done with the configurable Terrain Response controls than just those tiny black pushbuttons, and in the rear, the strengthening hoop running up the C pillars and through the three-quarter roof windows is a little odd, but you quickly get used to it. 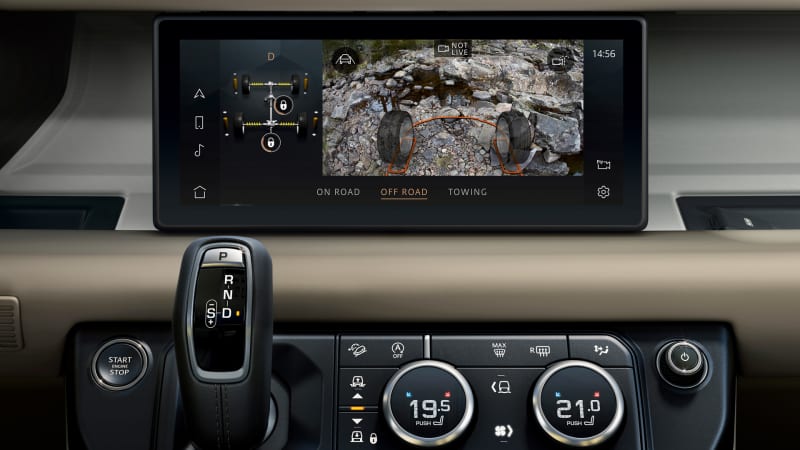 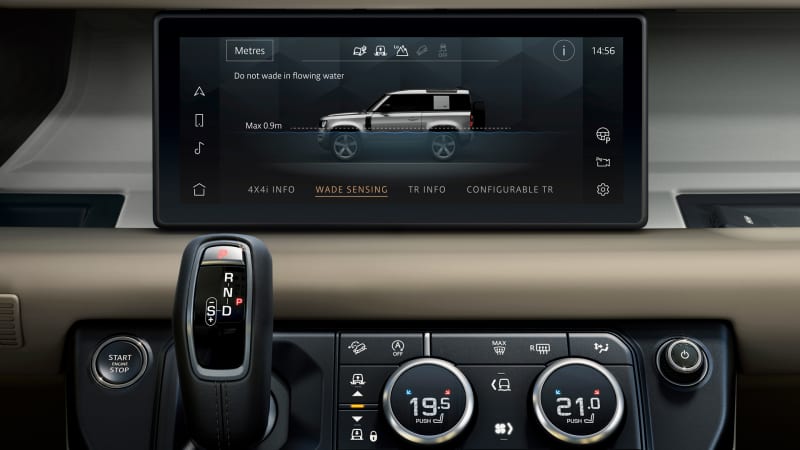 With a choice of long-wheelbase 110 and short-wheelbase 90 models, most Stateside vehicles come with five seats as standard, but in Europe there's an optional third row of occasional seats that hinge out of the floor. Given how small they are, no one on the left side of the Atlantic should miss them.

U.S. engine options include a 2.0-liter turbo inline-four with 296 horsepower and 295 pound-feet and a 3.0-liter turbo inline-six with a mild hybrid system delivering 395 hp and 406 lb-ft. We grove a European diesel unit, a four-pot slugger with 237 hp and 317 lb-ft that combined with the ubiquitous ZF eight-speed and the standard permanent four-wheel drive. There's no steering-wheel shift paddles, so you have to push the center lever over to the side to access gear hold-downs – it kind of suits the vehicle, and the 'box's slow kick means you will need to use it when overtaking.

Off, then, on winding country roads to Eastnor Castle, home of Land Rover's notorious off-road test tracks. First impression comes from my posterior; the ride quality is unrecognisable compared with the old Defender's jolting, solid-axle progress. All-independent air suspension smoothly controls body heave-and-roll over bumps and through the turns, leaving you with an impression of the car "breathing" over undulations. And that's a vehicle shod with specialist 20-inch Goodyear Wrangler off-road tires. Sure it "clambers" a little over bumps and sharp-edged potholes will thump through the frame, but overall the ride is really very respectable. 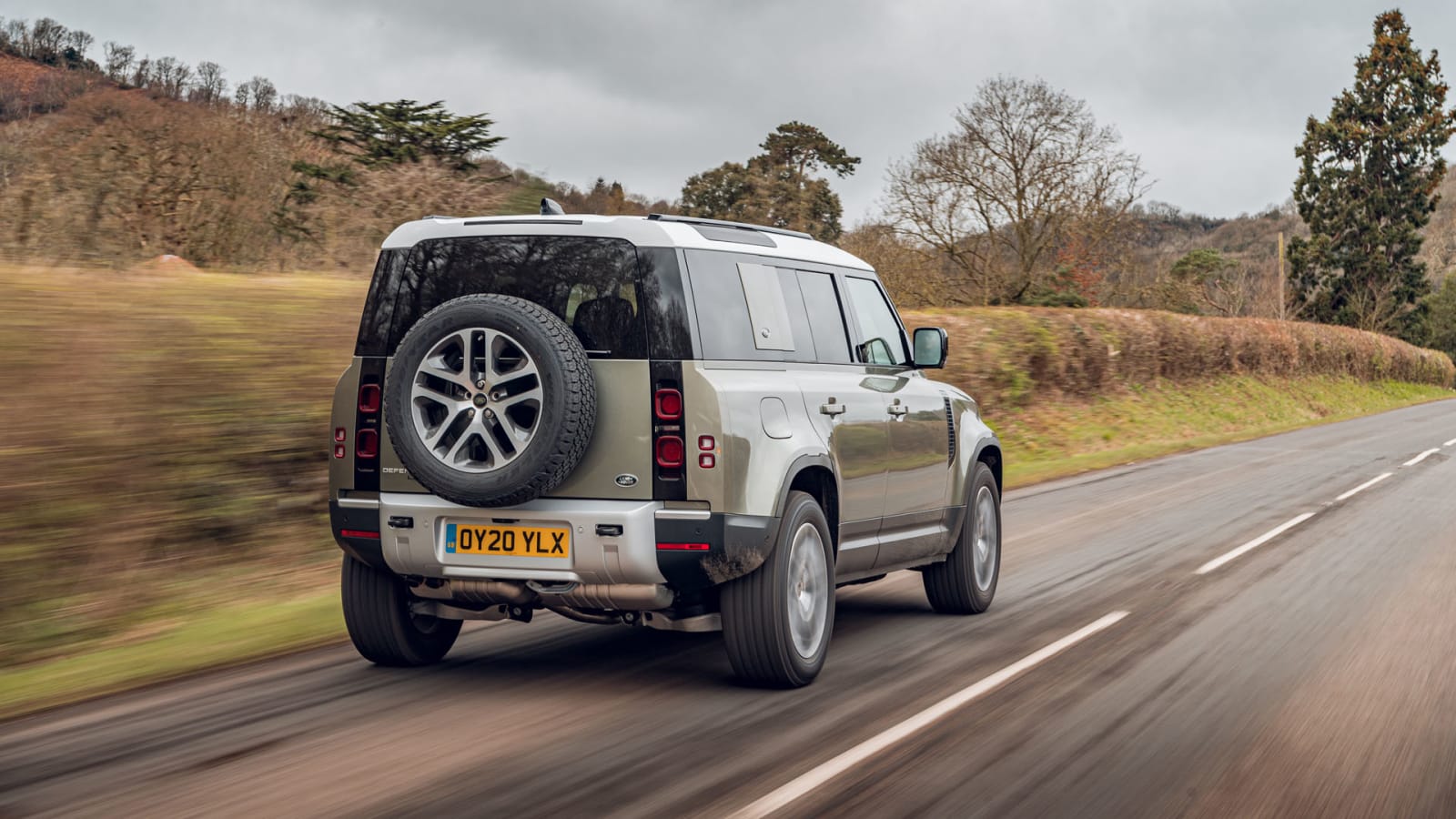 The diesel has enough grunt to check out the handling and, again, stand by for a shock: The massive body stiffness and modern suspension and steering have wrought miracles – the new Defender handles and feels secure in a way its predecessor never did. Corners can be attacked with a commitment that would have fired you off the road in the old model. The air suspension allows the tires to grip even on slippery washboard surfaces, which would have the predecessor skating around like a bear on ice. The general trait is to push straight on in corners, but it turns in to bends much better than it has a right to, with lovely progressive steering that has superb on-center response. And the damping control is magnificent, with a bit of initial body roll into the turns, which is ultimately limited so it doesn't feel like a three-master in a gale.

At nearly 16.5 feet in length (including the hatch-mounted spare tire) and tipping the scales at roughly 5,000 pounds, the four-door 110 is no shrinking violet, but placing it on the road is surprisingly simple. You sit high in the driver's seat, and you can see the opposite front wing, which adds to the intuitive feeling of where the vehicle is on the road. The brakes are magnificent, too; progressive and powerful with a decent grab at first touch and a long travel so you can slow with control. 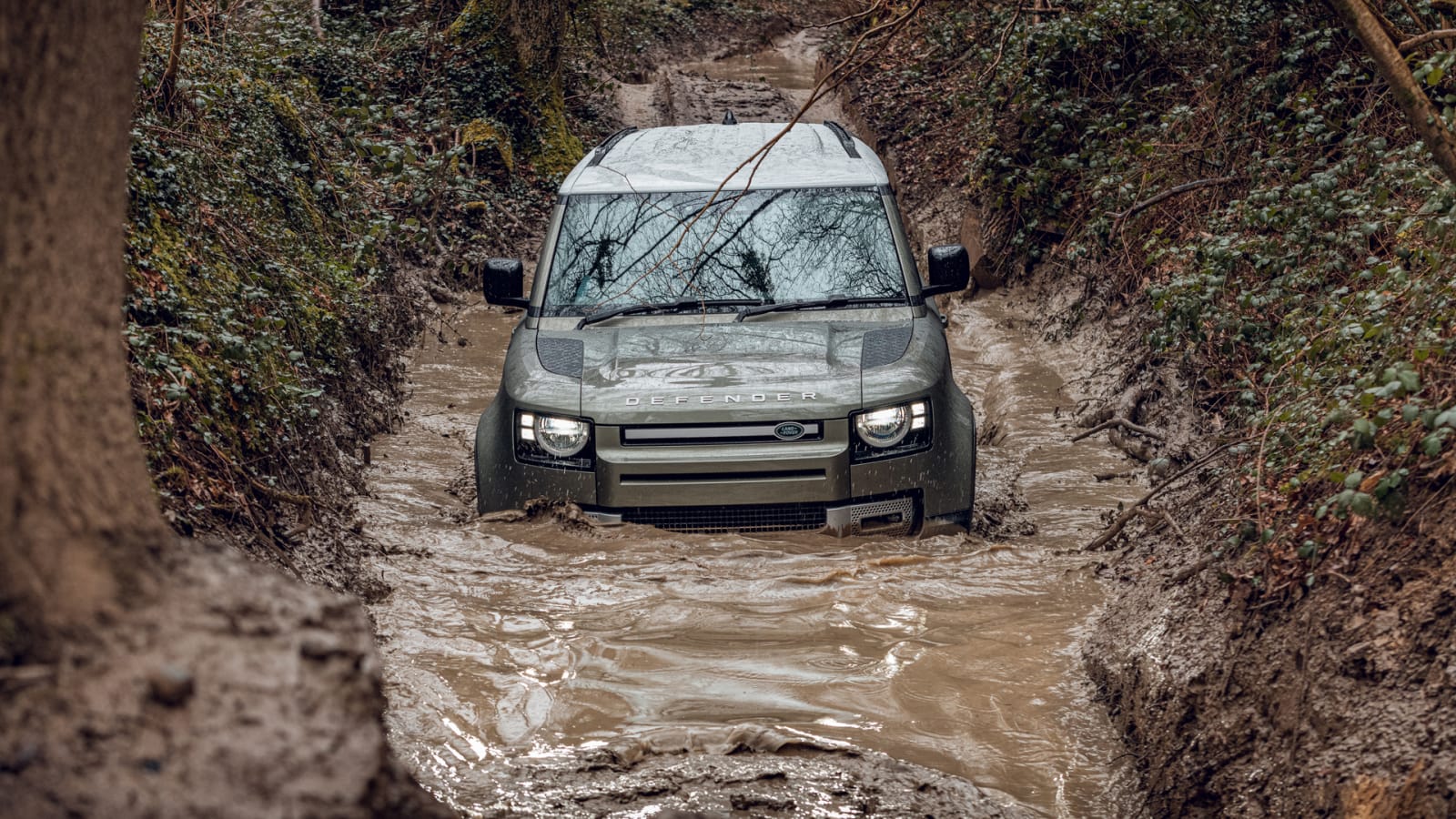 Land Rover has recently revised its test tracks at Eastnor, and as we set off, lead instructor Martin Gregory warned: "These are tracks where I wouldn't be happy putting anything other than a Defender on."

He was right. Near vertical mud falls, exposed tree roots, half-meter deep ooze and yours truly at the wheel failed to stop this new Defender's confidence-inspiring and inexorable progress at near tick-over engine speeds. Those wheel cameras are brilliantly useful, the low-ratio crawler gears are simply selected, and the steering has variable weight to enable quick changes of direction. Useful, too, is the selectable hill-descent control, and the selectable Terrain Response means you can choose to lock the center differential but not the rear so as to keep the steering response on mud and sand.

Old Defender could do all this, too, but with a great deal more drama and requiring a fair degree of knowledge and experience of the driver. In that respect Defender has come of age by in part democratising off-road ability. 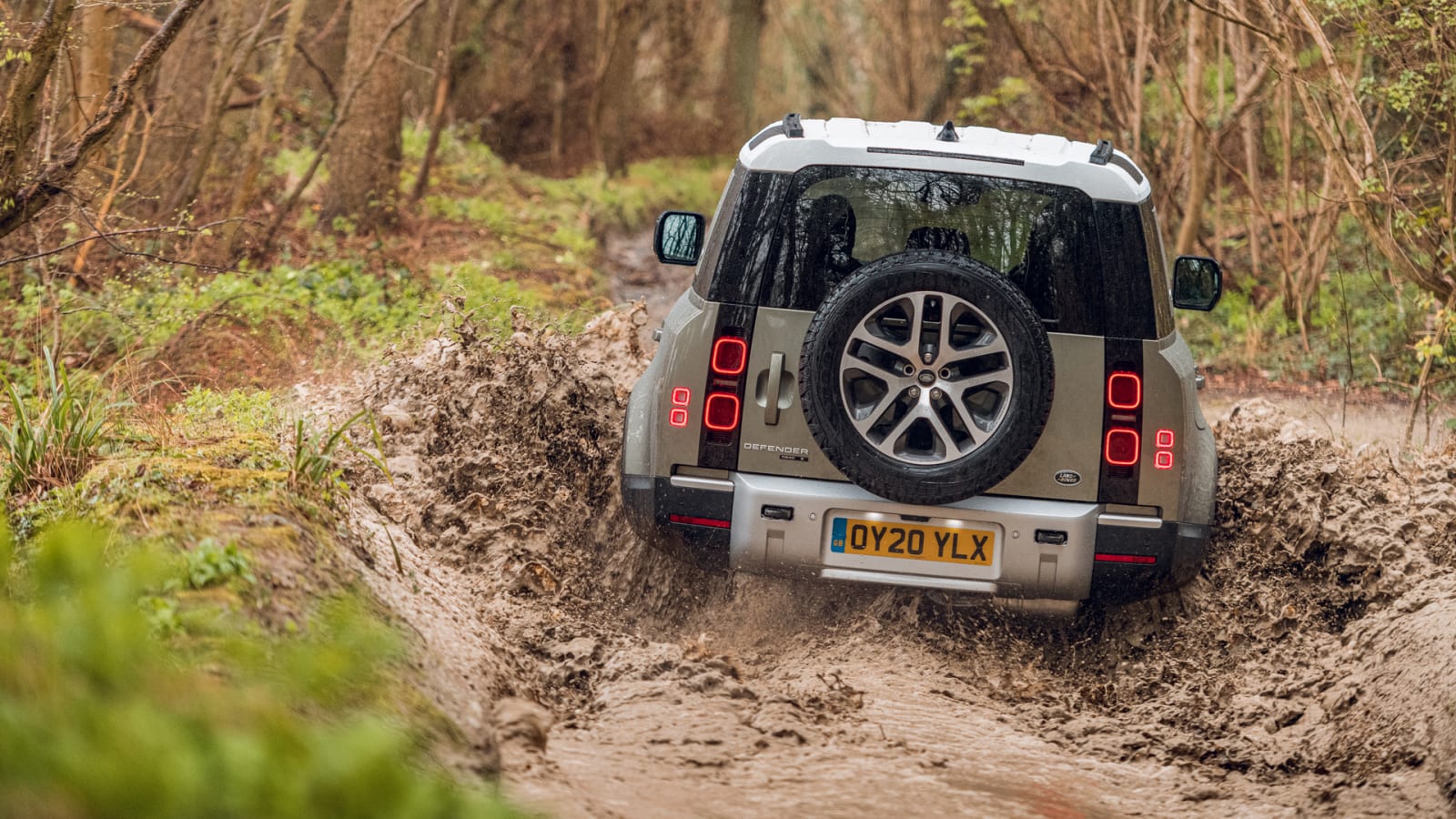 For the past 72 years, Land Rovers have pushed and clambered, traversed and forded their way into our hearts. With a cabin smelling of wet dog and baler twine; a stretcher, a sheep or an anti-aircraft missile in the back; the heater roasting knees while leaking windows soak them; with passengers jammed into the door frames, Defenders would often break down at the worst possible moment. But we still loved them. They are part of the myth we Brits tell about ourselves – even our monarch, Queen Elizabeth II, drives her own Defender on her Sandringham estate.

But unlike that endearing if unreliable old Land Rover, the new Defender is a proper SUV, designed and engineered with heart and soul, with just as much ability off-road as its predecessor, but with modern safety, convenience and comfort. You might not be able to put a crane, or a turntable ladder on the back, but you'll be comfortable, dry and you'll hopefully arrive at your destination – although Land Rover's reliability hasn't been exactly peerless in more recent times, either.

Cometh the hour cometh the vehicle? Possibly, and although in the current climes Defender deliveries from the plant in Nitra, Slovakia, will be slow to come on stream, there's something weirdly appropriate about this radical rework on an old familiar theme in these troubled times. 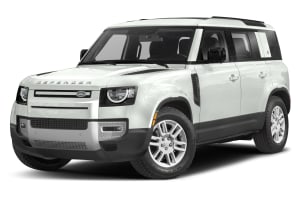