It relies on recycled and green materials for its interior Polestar is here to stay, and now the new offshoot brand has a concept car to envision its future. The vehicle in question is called the Polestar Precept. It takes shape as an electric four-door grand tourer, and Polestar says the car reveals “a vision of the brand’s future direction and a clear expression of intent.” One doesn’t have to read between the lines to know what that means.

Recycling enthusiasts should gather round to hear about the Precept. Polestar and Volvo are some of the most outspoken brands when it comes to climate change and our impact on the world around us, but it also speaks through vehicle design. Flax-based composites are used for interior panels and seatbacks — Polestar claims it offers a 50 percent weight savings and 80 percent reduction of plastic waste. Seat coverings are made of recycled PET bottles (PET stands for polyethylene terephthalate and is a form of polyester). The seat bolsters and headrests are made of recycled cork. To finish it off, Polestar made the carpets from reclaimed fishing nets. It claims “these elements, combined with digital artistry, define a new premium luxury that surpasses the conventions of leather, wood and chrome.”

The Precept's exterior is simultaneously muscular and minimalist. The lines suggest speed and purpose, but it's not an over-the-top boy racer execution covered in massive aerodynamic features or poked full of holes. It looks every bit the part of a traditional grand touring coupe, only with bonus rear doors — like a modern, angular RX-8. 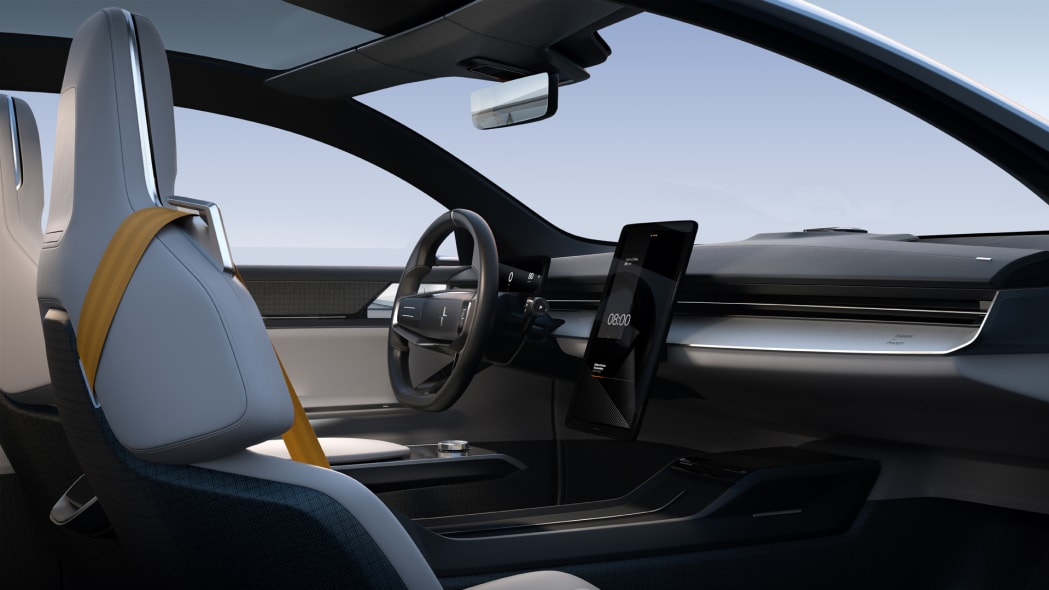 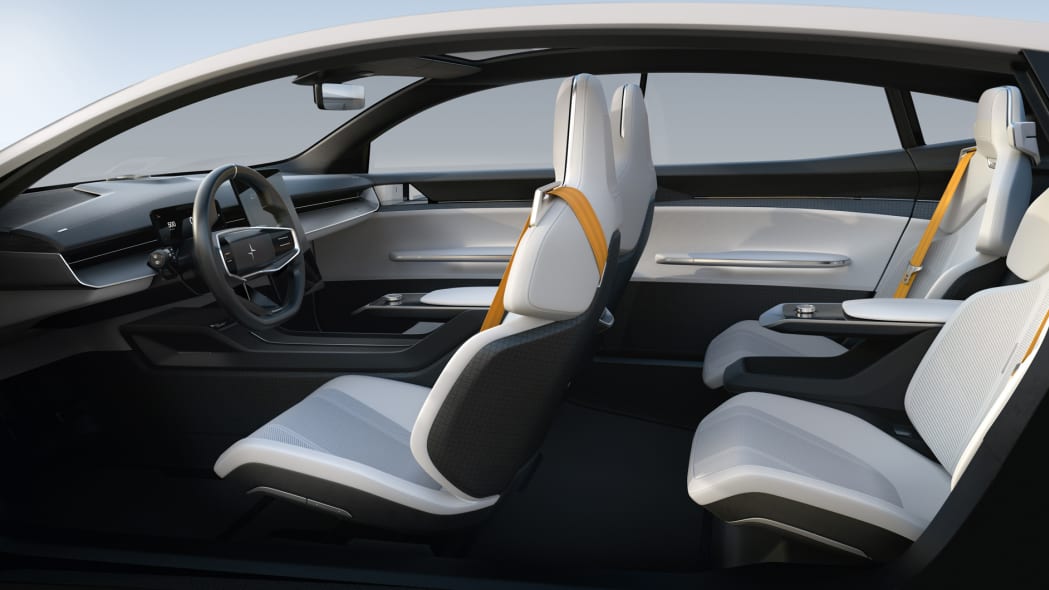 The theme continues inside. The Precept's cabin was penned with almost perfectly horizontal lines reaching both side-to-side and fore-and-aft. Only the vertical infotainment screen and steering wheel interrupt the dash. In another nod to its sporting intentions, this four-seat concept has bolstered buckets for all four seating positions.

Cars that use recycled materials are always fascinating, and we’ve no doubt in the Swedes’ ability to pull it off. There’s plenty of futuristic tech baked into this car, too. The Precept features your typical radar sensors and high-def camera (in the “Polestar SmartZone” grille), but it also has a Lidar pod atop the roof. Polestar didn’t claim any self-driving ability, but this is a concept that is meant to act as the next step toward increasing abilities of our driving assistance systems. Eye-tracking sensors on the inside are able to monitor the driver’s gaze, too.

Polestar has lightly massaged the Thor’s hammer LED headlight design with separated elements, but it’s still similar to the current look. The side mirrors are replaced by camera-based units, and the regular rearview mirror was replaced with a digital screen.

Polestar is eager to brag about its next-gen infotainment system in this car, powered by Android. The center screen is a 15-inch touch display, which is complemented by a 12.5-inch digital instrument cluster. Polestar even managed to get an illuminated emblem in a solid piece of crystal in between the rear seat headrests. We liken it to BMW’s glass interior package with floating emblems in the gear shifters.

We’ll have to wait and see what production car Polestar releases next, but something like the Precept seems likely for the brand’s future based on the language used to describe this design. If the Polestar 1 is anything to judge the brand by, we're excited for the future ahead.