Only two months ago, predictions had it that the fourth-generation Ford Focus RS would work up a mild hybrid powertrain and might be unveiled as soon as this year. According to a report in Autocar, that's all out the window, and it was Europe's new CO2 emissions regulations that hurled those plans through the glass. The magazine's sources said "the mild hybrid is not enough" to help the automaker comply with overall fleet emissions set at 95 g/km for 2021 and getting more stringent after that. A Ford exec said, "We are waiting for our engineering team to come up with a solution on the powertrain." Until that happens, the RS is on hold, Autocar writing that a debut is likely delayed until 2022 or 2023.

Ford was expected to carry over the 2.3-liter EcoBoost four-cylinder from the third-gen Focus RS, abetted by a 48-volt hybrid system. Combined output would have settled somewhere around 400 ponies, with the the ICE driving the front wheels and an electric motor turning the rear axle for drifty, AWD goodness. Now it appears Ford's considering a juiced-up version of the 2.5-liter Atkinson-cycle four-cylinder that will soon appear on dealer lots in the Escape PHEV. That engine and electric motor in the Escape combine for 222 horsepower, shifting through a CVT.

The relevant numbers are 29 g/km, which is the Escape PHEV's CO2 emissions figure in Australia, and 175 g/km, which was the outgoing Focus RS' emissions figure in Europe. The erstwhile plan for an integrated starter-generator in a 48V mild hybrid system was figured to cut as much as 30 g/km off the 175 g/km number, which wasn't nearly enough. Of course, bolting on turbos and throwing out the CVT will increase emissions, but that's tolerable when starting near the Escape PHEV's 29 g/km.

If the 2.5-liter gets the go-ahead, Autocar suspects the ICE will marshal 300 horses, the electric motor adding another 100 hp or so for a combined 400 hp and 425 pound-feet of torque. A dual-clutch transmission has been mooted as an option, but could become a necessity.

The second, equally large hurdle is that whenever engineers do come up with a powertrain concept, the solution can't blow up the weight nor the price of the car. The departed Focus RS in standard guise cost about £36,000 (over $46,000) in the UK, increasing to £40,000 (nearly $52,000) for the end-of-run special editions. The series production price was a touch under the price of the Volkswagen Golf R, while the current Honda Civic Type R starts at a scarcely believable £31,870 ($41,290). Ford wants to stay in that competitive set, it's unique proposition being drift-happy high-horsepower performance. It would do no good to get the hybrid to perform as desired only to be backed into price comparisons with the £46,200 Audi RS3 or £48,500 Mercedes-AMG A 45. 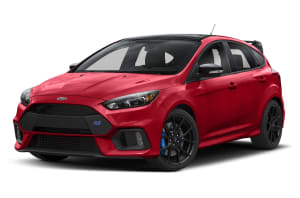