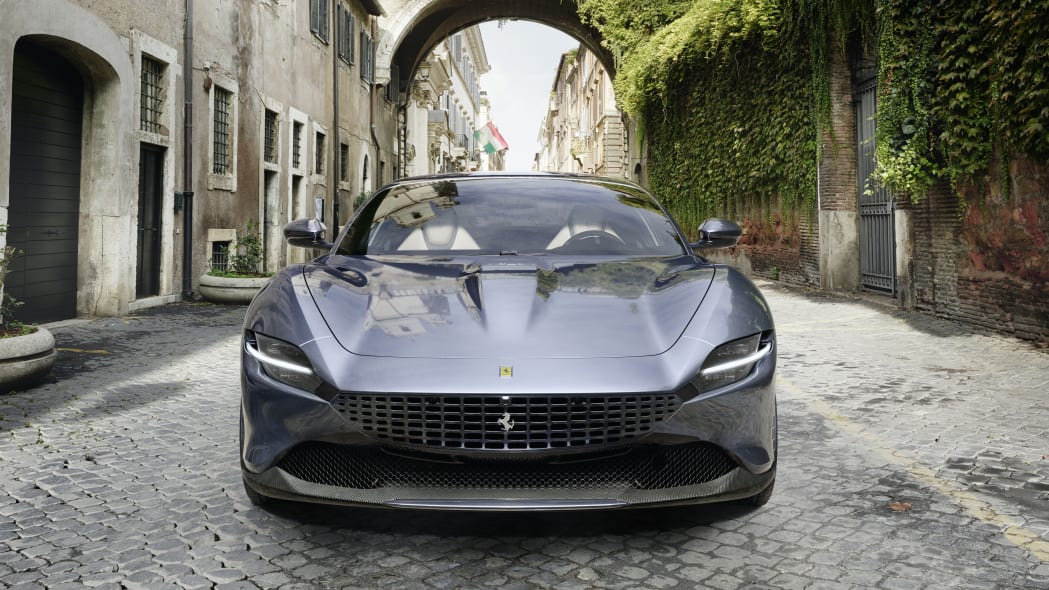 The Ferrari Roma saw its grand release just over a month ago in Italy. At the time, Ferrari was rather stingy with details. We were given a few key facts and figures, but there was even more that we were left wondering about. That’s now changed, as Ferrari has provided much more info about its newest two-door GT car.

We knew the 3.9-liter twin-turbo V8 made more power than the Portofino — 611 horsepower and 561 pound-feet of torque — but now we know what Ferrari did to get there. The Roma features new cam profiles and a new speed sensor, which allowed Ferrari engineers to increase the maximum rpm. To make it emissions-compliant in Europe, Ferrari also had to add a gasoline particulate filter. Ferrari says it worked hard to optimize it, so that the filter doesn’t negatively affect driving enjoyment, and with the amount of power the car makes, it appears to have done a bang-up job.

Paired to the engine is a new eight-speed dual-clutch transmission. It’s derived from the unit in the SF90 Stradale, but Ferrari made a few modifications to it for Roma use. New for the front-mid-engine coupe is the addition of a reverse gear and longer gear ratios. The SF90 didn’t need a reverse gear, because it uses the electric motor to travel backwards. Ferrari also designed a new clutch module for this transmission and a more powerful ECU that’s said to make shifts quicker, smoother and more consistent.

Ferrari designed a totally new exhaust system for the Roma to give it a unique soundtrack. The geometry is different from the Portofino, and the two real silencers were eliminated. Ferrari says this drastically reduces back-pressure. The bypass valves were also redesigned in an oval shape. A strange detail to share, but Ferrari says this move improves the sound quality, and that’s of utmost importance for a car with the prancing horse on the front of it.

Perhaps you were thinking that this car was just a Portofino with a hardtop. Ferrari says, not so fast. Within the chassis and bodyshell, Ferrari says 70 percent of the components are completely new. It’s all been redesigned in an effort to reduce weight and use the latest production technologies. Handling should be superb and fun, as Ferrari incorporated its next-gen Side Slip Control 6.0 tech in the Roma. It also has the five-position manettino mode switcher on the steering wheel and the Ferrari Dynamic Enhancer (can adjust brake pressure on one or more wheels depending on the situation). 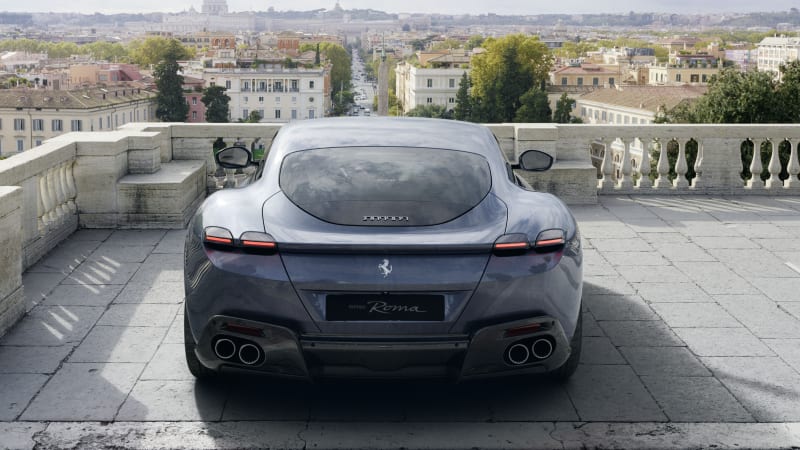 The most impressive aspect that had us talking incessantly about the Roma when it came out was how gorgeous it looked. You can read a deeper dive on some specific elements here, but Ferrari has not gone into even further detail. Inspiration for the styling came from grand touring Ferraris of the 1960s. Ferrari says “designers sought to remove any vents or superfluous decorations; for instance, engine cooling is guaranteed by surfaces locally perforated only where strictly necessary.” This led them to design the unique perforated grille. New vortex generators on the front underbody and an active rear spoiler help it produce more downforce, too.

Headlight and taillight technology have allowed Ferrari to get more creative with its design. For example, the taillights are smaller than current Ferrari taillights, which allowed designers to give them the appearance of inset gems. The full matrix LED headlights are also revolutionary in function. This new system allows you to keep the high beams on without blinding other drivers in front of you. It’s able to detect another vehicle in its light range and automatically turn off the area of the beam that would dazzle the other driver. This only works on a sparsely populated roads, as Ferrari says the high beams will completely deactivate if it senses heavy traffic. The same idea applies to reflective road signs — the system will sense the reflection and reduce the intensity of the light on the sign. It’s truly fantastic safety technology, but it also won’t be coming to America until our regulations allow these kinds of headlights. Other German brands offer similar systems in other countries today, too. 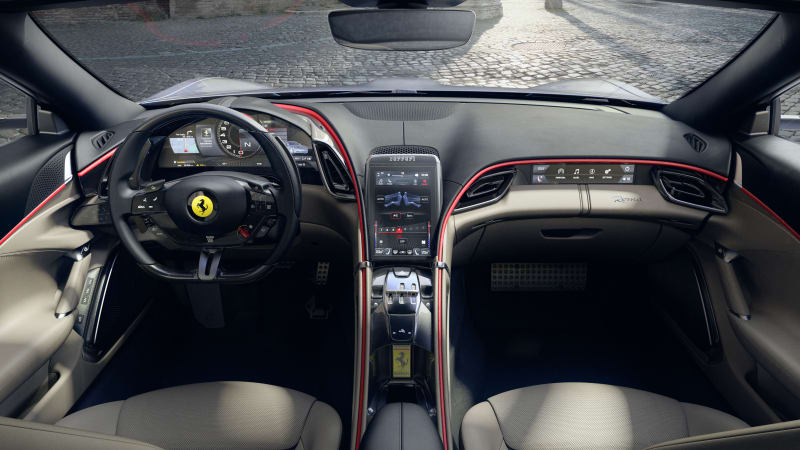 Ferrari took a big step forward in interior design and technology on the Roma. It’s described as an “architectural concept for volumes and forms.” Instead of a driver-oriented cockpit on most Ferraris, this interior is designed to be symmetrical. It also has a totally new central console design with a metal plate that’s meant to remind folks of the classic gated shifters of the past. The gear lever controls are set into the central console and are slightly canted toward the driver.

A redesigned, curved 16-inch digital instrument cluster is housed by a binnacle that extends from the dash. There’s huge flexibility in what can be displayed on this screen, but the default mode puts the tachometer right in the center where it should be. The steering wheel has haptic touch controls on it that allow the driver to “control any aspect of the car without taking their hands off the wheel.” There’s an 8.4-inch central infotainment system that houses all of the climate control, audio and navigation functions. Then, similar to other Ferraris, the passenger gets an 8.8-inch screen directly in front of them that can display performance figures, music, navigation and their personal climate-control settings.