2018 Ferrari Portofino First Drive Review | Forget all about the California

It's as far from its predecessor as the Italian village of Portofino is from California.

It's about 9,500 miles between the Golden State and a swanky former fishing village on the Italian Riviera known as Portofino, where pastel-painted cottages mix it with celebs and super yachts. For Ferrari, however, it's a gap of 10 years between the launch of the California, its first front-engined V8 sports car and this, the Mk. II version, the Ferrari Portofino.

"California is such an iconic name," says Nicola Boari, head of Ferrari product marketing. "Trying to stay close wasn't a good thing. Portofino is discreet, it's not as splashy as Monte Carlo."

The California was aimed at a new breed of Ferrari customer: younger, with a family, women. In one sense it's done that job well, in another it's failed. Boari admits with a shrug that not many women have actually bought a California, but for a car launched just as Lehmann Brothers was gasping its last, the car has attracted a new sort of customer just the same and attracted 35 percent of Ferrari's total sales. Last year, that numbered 8,398 vehicles.

"Same sex, but a different type of customer," says Boari, adding that California customers use their cars 150-percent more than typical Ferrari sports car owners, tend to use their cars every day and 30 percent of them even use the tiny rear seats.

"We had to learn new things," he admits. 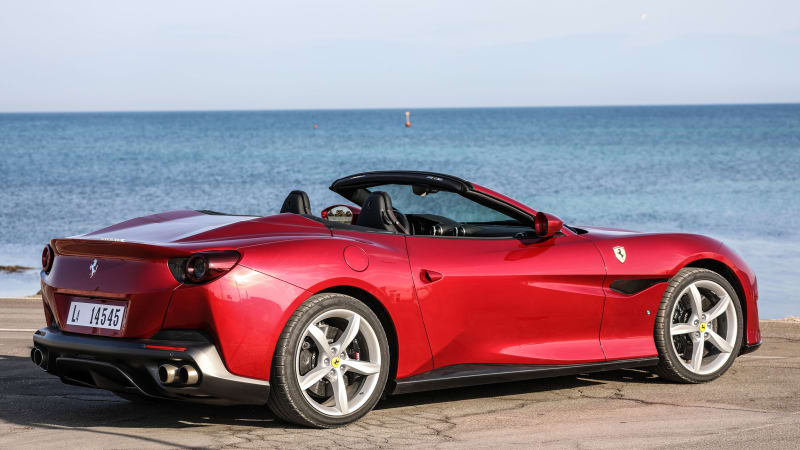 A lot of those "new things" have been crammed into this car, which goes on sale this August in the United States priced at $229,551. The basic premise remains the same: a 3.8-liter, twin-turbo V8 driving the rear wheels via a seven-speed, dual-clutch transmission and an electronically controlled limited-slip differential in a rear-mounted transaxle. That's 592 horsepower at 7,500 rpm and 560 pound-feet of torque at 3,000 rpm. The torque "curve" continues on from there with a profile resembling a pool table. It's good for 199 mph, 0-62 mph in 3.5 seconds, 0-124 mph in 10.8 seconds and gas mileage in the European test cycle of 31.7 mpg - this is no ordinary family vehicle.

The 2+2 Pinifarina-designed aluminium body has been completely redesigned, but retains the same basic dimensions as the outgoing California. Dealers reported that the size was just about right, so the Portofino has grown by only 0.62 inch in length and 1.1 inches in width. It's lighter by 176.4 pounds, thanks mainly to a lighter body construction and interior, and stiffer thanks to more integral parts and aluminum pans under the floors. Thinner and lighter front seats have freed up almost 2 inches of rear legroom. There's an all-new interior with more modern controls, a touchscreen and better air con and sat nav,. All were criticisms of the old car. This new Ferrari even accepts Apple CarPlay (though not Android Auto), but in Europe it'll cost you the equivalent of $3,320.

The California's award-winning engine remains largely unchanged, but punches out another 39 hp thanks mainly to breathing improvements, with better air intakes and a big-bore exhaust with electronic valves in the mufflers to pull the air through more effectively at different engine speeds. It also enhances the noise. Ferrari still limits the engine's torque in the first three gears to encourage it to rev and makes it feel more like a naturally aspirated unit. It also now comes with an intelligent oil pump, which increases its pressure when required. At the rear, the Portofino has been given Ferrari's latest software for the limited-slip differential and stability controls. 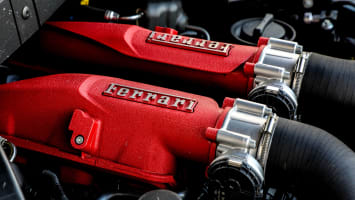 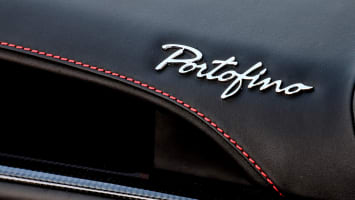 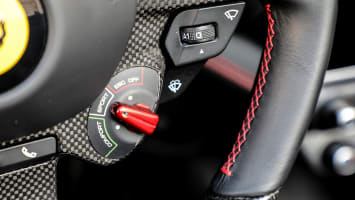 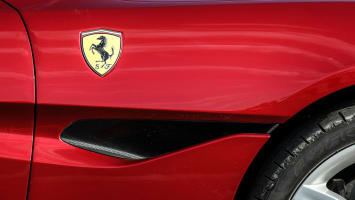 The California's two-piece folding hard top dominated its looks, giving it a hunchback appearance with the top down. For the Portofino, Ferrari spent time camouflaging the rear deck's height with shapes and colors, though the space required by that top still makes this a rather weirdly proportioned sports car. There's a litany of very pricey optional carbon-fiber panels, but in reality the unadorned car feels modern and relatively good looking with the top up, which can now be erected and folded on the move.

The interior is heavily redesigned with a busy but attractive dashboard. Those rear seats are still only suitable for shopping bags, or children no bigger than shopping bags, but it frees up enough space in the trunk to admit three airline carry-ons with the roof up. The driver's binnacle is a strange mix of an analogue tachometer flanked by a digital speedometer and ancillary instruments. That steering wheel might look great, but it's hard to tell since it's far too crowded with turn indicators, the horn, lights, damping, and traction and chassis-setting switches, plus the starter. The fixed position gear-change paddles are behind the wheel. Most of it becomes obvious after a while, but the indicators aren't well placed for the fingers and the switch action is poor. The rest of the dash is mostly good, with clear graphics and a fast response from the navigation system, but some of the switches and rotary controls wobble alarmingly.

The driver's seating position is good, with lots of power adjustments for steering and seat, but the pedal box is too small for big feet, with overhanging trim catching shoe welts as they travel from brake to throttle and vice versa. In a car of this performance, that's just scary. 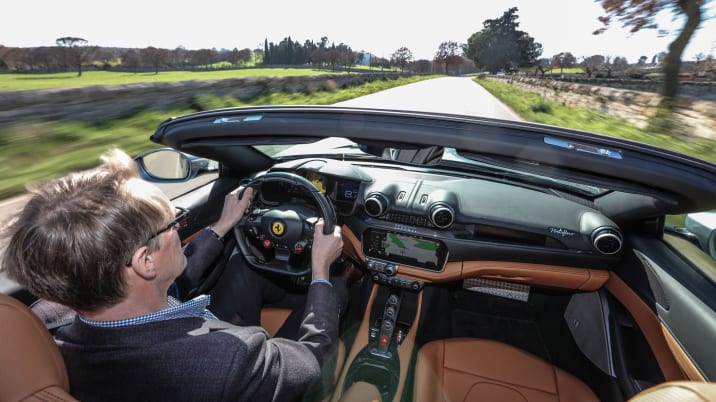 Pull the right-hand fixed-position paddle and the 'box engages first and the clutches grumble. At maneuvering speed, the Portofino feels unwieldy, with poor views of the body's extremes. There's also driveline shunt, and the rear suspension is noisy over bumps. This cacophony was joined by a troubling rattle from our test car's passenger door.

Speed up, however, and the double wishbone suspension's magnetorheological dampers allow those big 20-inch Pirelli P Zero tires to sail over the worst bumps in Southern Italy - for a 200 mph car, the Portofino rides very well indeed. That drivetrain shunt disappears at about 25 mph, and the engine pulls hard from just over 1,000 rpm.

Ferrari test driver Fabrizio Toschi says that round the company's Fiorano test track, the Portofino is only about 2 seconds off the pace set by the 488 sports coupé, which has 69 hp more. Get on it and you'll believe him. The V8 rasps like the brass section in a college band (Ferraris don't shriek anymore) and down changes from the dual clutch sound like firecrackers, but it certainly does the business.

That bodyshell feels as stiff as a new pair of jeans, with barely any twisting or shake. While the Portofino feels marginally stiffer with the roof up, it's impressively taut in all conditions. Just the tiniest squeeze of the throttle has those twin-scroll turbos spooled up, firing the car down the road like a dart. You work out where you want to be, press the loud pedal, and you're there. It's really that quick. And if the turbocharged V8 doesn't quite have the quick response of a naturally aspirated rival, it's close enough not to matter.

The dual clutch has well-spaced ratios and changes cogs as fast as you'd ever want, especially with Sport dialed in on the manettino selector. Most impressive is the chassis' stability, which is partly to do with the electronic stability control and rear diff that are constantly working to keep the car tracking straight and true, even at speeds where they'd throw away the key if they could catch you. 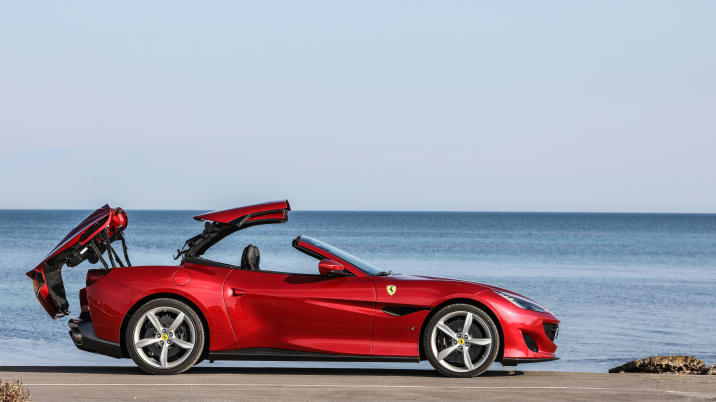 Not quite so convincing is the steering, Ferrari's second attempt at an electronically-assisted system. It's well-weighted and accurate, and has decent on-center response, but it feels artificial and on occasions imparts far too much torque on turn in. Worse is that it simply doesn't give you a faithful understanding of the front end grip, so you drive on trust. Toschi said the polished roads of Southern Italy didn't flatter the system and we'll give him an even break here, but the fact is that rival companies, like Jaguar, do electronically-assisted steering better.

Taken in the round, however, the Portofino is so absurdly easy to drive and live with that you have to keep reminding yourself that it's also a very serious 200-mph sports car. They used to say that the California wasn't a proper Ferrari, but now that the company is developing an SUV, it's a moot point, really. The Portofino is as good a car as ever carried the Scuderia Ferrari Cavallino, which is as fine a compliment as you can pay to the California's successor. 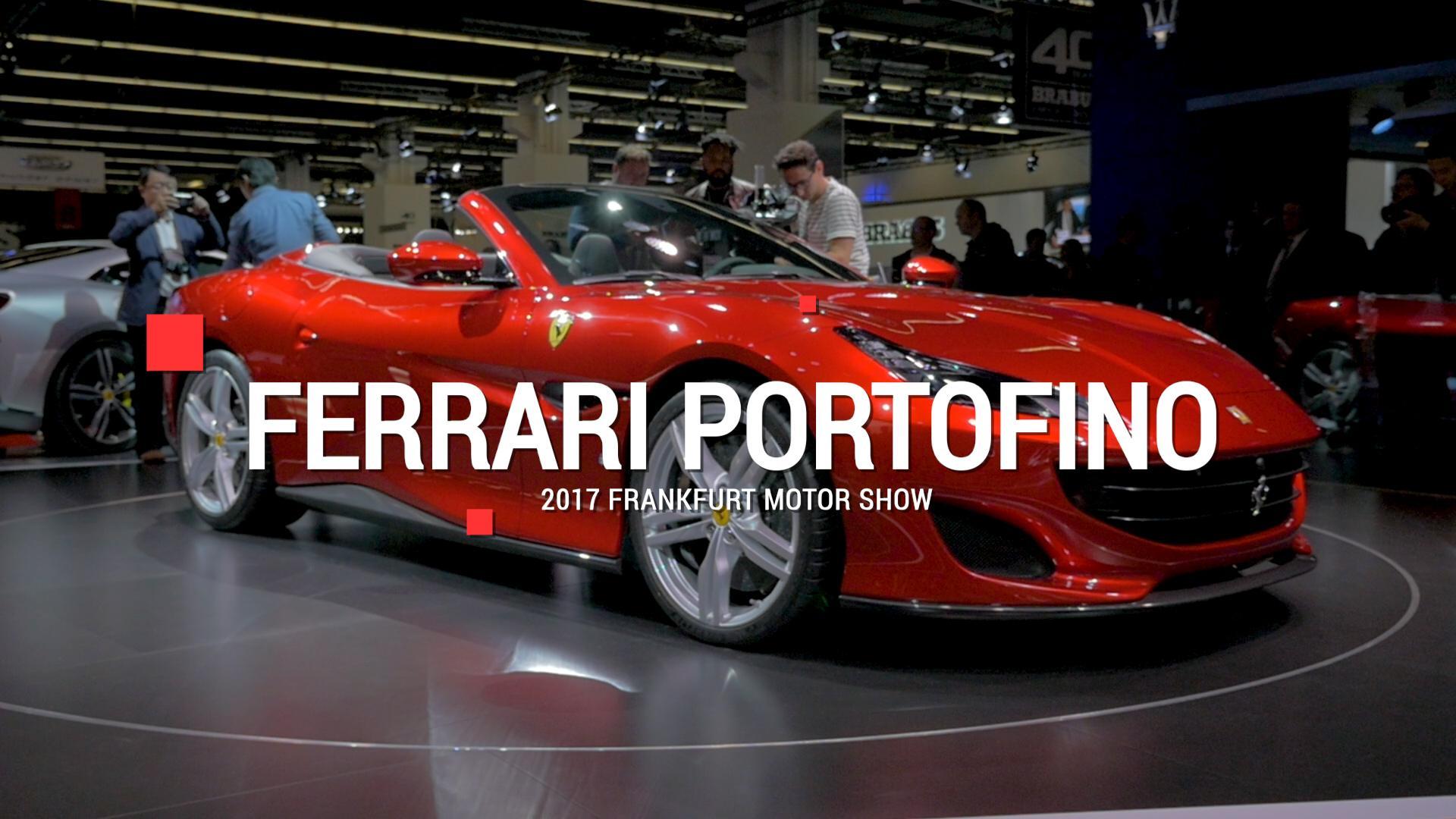