Audi Sport chose the Q8, not the Q7, as the foundation on which to build its flagship SUV. Both would have been well-suited to receiving a 600-horsepower V8, and the global market for high-riding hot rods is stronger than ever, but the firm told Autoblog starting with the Q8 made a lot more sense.

"We chose the Q8 to become an RS because, in our core markets, customer demands focus on the very design-oriented SUV-coupe body style," Audi spokeswoman Susanne Mellinghoff told us. She pointed out the Q8 is sportier than the Q7, both in terms of design and in terms of performance, so the company's vehicle development team saw more potential in it when they weighed their options.

Adding the Q7 to the Audi Sport catalog wouldn't be as simple as dropping the RS Q8's twin-turbocharged V8 in its engine bay. Markus Eberle, the RS Q8's product manager, explained the Q7 and the Q8 are more different under the sheet metal than they might seem, so there would be several technical hurdles to clear before making an RS Q7. That's not to say it will never happen; understandably, the representatives we spoke to weren't allowed to talk about future products.

Product planners took a different route when they mapped out the Q3's future. Both of its body styles are available with Audi Sport's sonorous, 400-horsepower straight-five engine in the European market, but the Q3 and the Q3 Sportback are technically much closer than the Q7 and the Q8. For the time being, the mighty SQ7 sold in Europe will remain the hottest Q7 available, and the RS Q8 (pictured) will continue occupying the top spot in Audi Sport's SUV hierarchy. 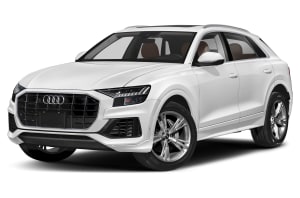