Dacia gives the Vatican a Duster to use as a Popemobile 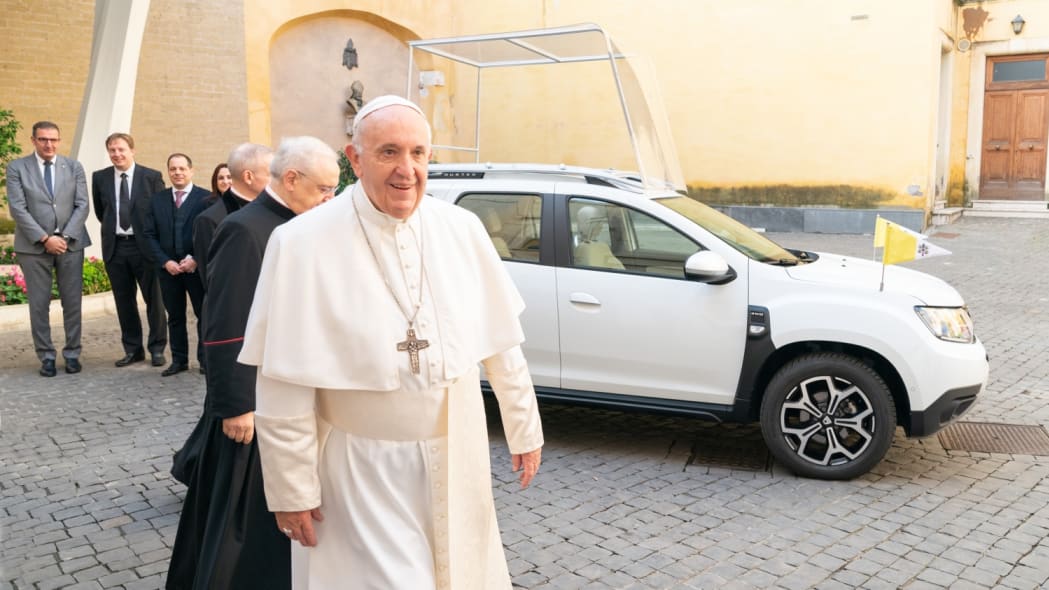 Pope Francis isn't immune to SUV fever, and, like thousands of European motorists, he has chosen a Dacia Duster as his next ride. The difference is that he didn't have to pay for it, or even visit a dealer; the Renault-owned Romanian brand gave the Vatican a purpose-built Duster Popemobile for free.

Starting with a stock, second-generation Duster, Dacia's prototype-building division teamed up with a coachbuilder named Romturingia to cut out a large sunroof covered by a removable glass structure, and to reduce the ground clearance by a little bit over an inch in order to make the cabin easier to get in and out of. The company noted it also added a particularly comfortable rear bench for Pope Francis, plus internal and external support elements. We haven't seen images of the interior yet.

Similarly, Dacia hasn't released full technical specifications, so we don't know what's under the hood, but the fact that the Pope's Duster is a four-wheel drive model narrows it down to two possibilities. It's either powered by a turbocharged, 1.4-liter four-cylinder engine that makes 130 horsepower, or a 115-horse version of the venerable 1.5-liter turbodiesel that has powered millions of cars in recent years, including Renault, Nissan, and even a few Mercedes-Benz models. Either way, the newest member of the Vatican's fleet comes with a six-speed manual transmission.

The Vatican has historically used a shockingly diverse selection of cars to transport the Pope, including a Fiat Campagnola and a heavily-modified first-generation Mercedes-Benz M-Class. Pope Francis has made it a point to use humbler cars like a Jeep Wrangler and a Fiat 500L, and he occasionally drives himself around the Vatican in a 1984 Renault 4 GTL given to him a fellow priest.