After 10 years at the top, five of those as a segment-defining beast, the Mercedes-AMG SL 63 is no more. CarBuzz discovered the model removed from the Mercedes-Benz USA website, and asked Mercedes for comment. The response, "We [do] not have MY20 SL 63." We checked the German Mercedes website, it's gone there, too. The grunty, feisty V8 roadster follows the long-legged V12-powered SL 65 out the door as AMG Mercedes and AMG overhaul offerings at the top of the range and prepare the world for a new SL. Only the SL 450 and SL 550 remain for now. The is the first time since 1995 that the SL line hasn't listed an AMG version among the offerings.

The SL has never been a huge seller, and it's about to put together the worst five-year run of U.S. sales since 1982. But its history and cultural perception are enormous for the brand; Mercedes' head of design Gordon Wagener said of it, "This is the most iconic car we have, going back to the 300 SL." The AMG models would have sold in even smaller numbers, but they were as aspirational as you could get among mainstream automakers. And the R230 SL 63 on sale from 2008 to 2012 wasn't merely an object of ambition, it was outstanding. That's the model that replaced the SL 55, introducing the SL 63 moniker to the lineup with a naturally aspirated 6.2-liter V8 putting out 518 horsepower and 465 pound-feet of torque. It was a mobster in Ferragamo, a ruthless driver with sinful looks. Things went downhill from there, in the sheetmetal and under the hood.

A five-year-old rumormill hasn't sorted out the most important concretes regarding the coming SL that will reinvent the flaship convertible. We know AMG is in charge of development, it's been described as a "butch, almost mean-looking sports car" occupying a space where it isn't threatened by the AMG GT Roadster, probably including a hybrid model with lots of horsepower and all-wheel drive, and it might arrive as soon as 2021. 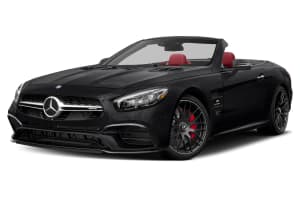